Outfront Media works in a specialty REIT sector in the US and Canada.

The REIT capitalizes on the growing Out of Home segment.

Outfront Media (OUT) is a specialty REIT which is mainly engaged in media promotion including outdoor displays. The REIT is active in the United States and Canada, having 47,381 billboards and 463,189 transit displays under its management. Outfront Media is primarily invested in large cities and features an inimitable portfolio of assets. Its asset mix consists of wall displays, bulletins, posters and digital bulletins. The REIT follows a simple yet diversified business model where it generates revenue by leasing display space to its clients. The length of the contracts may vary from as short as four weeks or less to as long as one year.

As important as it is to look at the micro environment of an organization to gauge its investment potential, it is equally important to analyze the macro environment as well. Since Outfront Media deals in media promotion focusing on outdoor displays, a thorough analysis of advertising sector is required to be done for reaching proper conclusions.

Out of Home advertising is currently going through a boom phase, largely thanks to positive trend in general economy. While Out of Home advertising sector is directly correlated to the increase in GDP, the relationship is not perfect. During 1990 and 2018 phase, the sector outpaced the GDP growth rate 64 percent of the time while remaining times, it underperformed by an average of 3.9 percent. However, since 2008 market bust, the sector has shown consistent positive growth, clocking 3.7 percent CAGR from 2011 onwards. 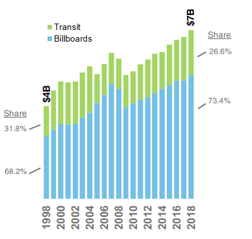 However, within advertising sector, Out of Home has performed especially strong. Compared to 2.9 percent CAGR shown by overall media advertisement sector, Out of Home outpaced the growth by posting 3.3 percent CAGR. The sector is also fast evolving with paradigm shift. The growth of mobile advertising has changed sector landscape as by 2018, mobile advertisement accounting for 35 percent of US advertising. The US Out of Home market mainly consists of transit and billboards, with billboards commanding nearly three-fourth of the segment.

The overall trend in Out of Home segment is expected to remain positive as the demand will likely retain its upward trajectory. Out of Home is preferred by the advertisers on account of its cost effectiveness and better visibility as unlike TV or internet ads, these promos may not be skipped. Further, as the segment is still growing, the market size will likely expand over a period of time since advertisers will be making higher allocation towards Out of Home segment. Currently, the average allocation of ad media budget for Out of Home stands at an average of 2.1 percent while the sector grows to integrate itself with social media and mobile.

On the micro side, Outfront Media boasts of an enviable product mix of billboard and transit. Both these mediums work in tandem and provide synergies. According to the figures provided by Outfront Media, 86 percent of its top 100 customers purchase transit and billboard media together. By providing one stop shop for their Out of Home media promotion requirements, the REIT is able to draw repeat business from its clients. Such customer loyalty not only helps the firm build solid base but also enjoy cost efficiency since they are not required to make significant outlay for customer acquisition.

Further, Outfront Media seeks to augment its position in the market through organic growth as well as through acquisitions. As currently the domestic market for Out of Home is highly fragmented, Outfront Media has the chance to solidify its position by creating a niche for itself.

Outfront Media recently reported its earnings and financial numbers for the third quarter of the year. The REIT earned $462.5 million in revenue while its operating income stood at $85.5 million. As adjusted Funds from Operations is considered to be one of the most important metric for a REIT, it is important to analyze the trend for Outfront Media. For the third quarter, Outfront Media's AFFO stood at $92.6 million, up from $86.4 million it had earned for the corresponding quarter of the previous year, thus showing strong growth. However, the FFO for the quarter was reported at $79 million, 7.3 percent down on Year over Year basis. The decline is mainly on account of higher amortization of direct lease acquisition costs.

Apart from its quarterly statements, it is imperative to study its financial makeup as well. During 2014 and LTM 3Q19 time period, the REIT has shown impressive CAGR of 5.5 percent. It also displays relatively low maintenance costs as a part of capex. Currently, maintenance costs account for less than half of its total capex. The REIT also places robust ROI threshold requirements on its digital and growth capex.

On the other hand, Outfront Media stock has grown over 35 percent in the past 12 months, providing solid returns to its investors. Coupled with its reliable dividend stream, the stock thus offers an attractive investment opportunity for investors with long-term horizons.

Follow Avisol Capital Partners and get email alerts
+
Add a comment
Disagree with this article? Submit your own.
To report a factual error in this article, click here.
Your feedback matters to us!