The GDP and stimulus question

GDP isn't everything, but it's a reasonable enough proxy for what we're aiming at with this very idea of having an economy - the people of the place getting richer over time. So, if GDP starts shrinking, then we might well see a policy reaction to this event.

The UK has just recorded falling GDP for November, so are we going to see a change in monetary policy?

I would argue that we're not and certain astonishment if we did. We shouldn't react to transient issues because, well, they're transient. True, often enough we don't know whether a particular economic event is caused by such transience or not, but here we've a pretty good idea.

Back in November, we were in the middle of an election campaign. One between a party that wanted to take the UK back to circa 1953 East German style, and one that, while a little too far left for my own tastes, had at least got the base message about capitalism and free markets.

We were also in the end stages - to be decided by that same election - of the uncertainty concerning Brexit. Were we going to leave the European Union or not?

We know that uncertainty is a killer of economic growth. The biggest variable in GDP over the business cycle is business investment. Exactly the thing that sinks like a stone when businessmen have no clue about what is to happen.

As I've been saying for many months now, the remarkable thing about the UK economy is how well it's done into the headwinds of that uncertainty. Further, given that the uncertainty is now lifted, we should see a strong rebound.

We should, that is - whether we actually will is another matter.

That means that we're going to need to see December's GDP numbers and at least February's forecasts (from, perhaps, the PMI numbers) before we know, absolutely, that this is just a transient issue that has now gone away.

Thus, I don't expect any move from the BoE as a result of these figures. 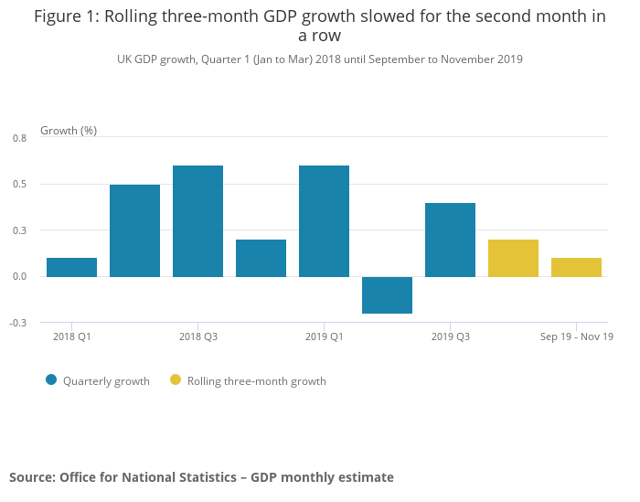 This was made up of the index of production: 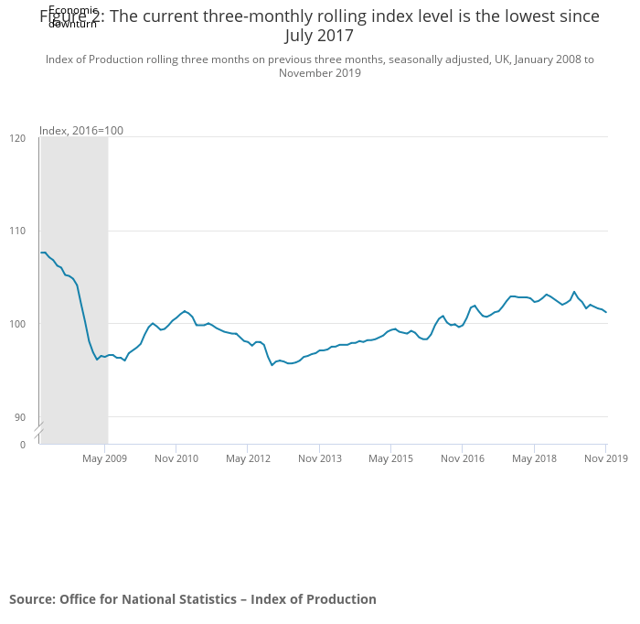 (Index of Production from Office for National Statistics)

Services are, of course, very much more important, as they're a very much larger portion of the economy, perhaps 8 times as much: 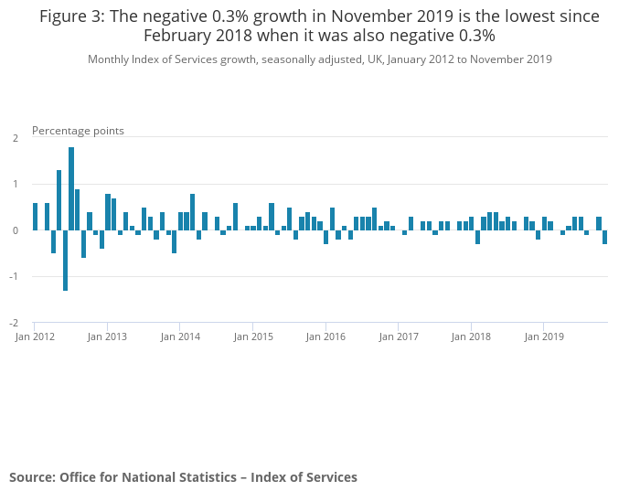 These are not lovely numbers

As I say above, in normal times we'd be thinking about whether there's going to be a policy change to gee up this somnolent economy.

The point being that we're not in normal times. As I've been saying. We've seen the PMIs rising after the election, which resolved both forms of uncertainty. Other business surveys are showing much the same thing. And we would - and certainly the BoE would - expect that change to feed through into investment and thus growth.

If all we had to go on were these GDP numbers, then I'd be expecting a more stimulatory monetary policy from the Bank of England. But because we're really very certain that we did have that transient issue of uncertainty - uncertainty which is now resolved - I don't think we will.

There's going to be a lot of commentary about how the UK economy is doing really badly at present and that we all need to take care. That someone must do something. My view is that the something has already been done, the election and thus the decision on Brexit.

Therefore, nothing need be done and nothing will be done. There's going to be no change in economic policy as a result of these numbers.

For those worried that it's not going to be a transient issue, the next statistics that will tell us anything are the January Purchasing Managers' Indices, which will start coming out on the last business day of this month. Those will be the first useful statistics we've got where the data has been collected after the election.