AstraZeneca terminated their cardiovascular outcome trial (STRENGTH) for Epanova due to lack of efficacy.

Acasti announced that the first of two phase 3 trials failed to show significant results, as they begin to investigate some abnormalities.

The STRENGTH trial strongly suggests that DHA, which is in all current Vascepa competitors, may counter the benefits of EPA.

Amarin's Vascepa will likely be the market for prescription omega-3 for the foreseeable future, until its competitors produce a successful outcomes trial.

A flurry of events have hit the omega-3 landscape on January 13. Long story short, it looks like Amarin (AMRN) will be able to rapidly dominate the prescription omega-3 market over the course of 2020 and for the foreseeable future.

As a quick reminder, the main marine-derived omega-3 fatty acids are docosahexaenoic acid ("DHA") and eicosapentaenoic acid ("EPA"). AMRN's Vascepa contains only pure EPA. In contrast, all other formulations (i.e. those approved or still undergoing trials) contain DHA and EPA, among other substances. Moreover, to date, Vascepa has been the only omega-3 formulation that has shown any cardiovascular benefits via the REDUCE-IT trial in 2018.

Following the recommendation from an independent Data Monitoring Committee, AstraZeneca has decided to close the Phase III STRENGTH trial for Epanova (omega-3 carboxylic acids) due to its low likelihood of demonstrating a benefit to patients with mixed dyslipidemia (MDL) who are at increased risk of cardiovascular (CV) disease.

As they begin looking at write-downs for Epanova-related assets, valued at over $600M, this one announcement will have a profound effect on the omega-3 landscape.

In a stroke of fate, another one of AMRN's competitor also took a solid hit the same morning. Touting a best-in-class competitor to Vascepa, based on phase 2 lipid profile results, Acasti (ACST) was attempting to repeat its feat of strength in two phase 3 trials, TRILOGY 1 and TRILOGY 2, in severe hypertriglyceridemia.

ACST has announced that CaPre, a combination of DHA+EPA+krill phospholipids, failed to significantly separate from placebo. In the press release, it was noted that there was a general trend towards a greater reduction in triglycerides for the active treatment. However, for unknown reasons, the placebo response was also abnormally high. 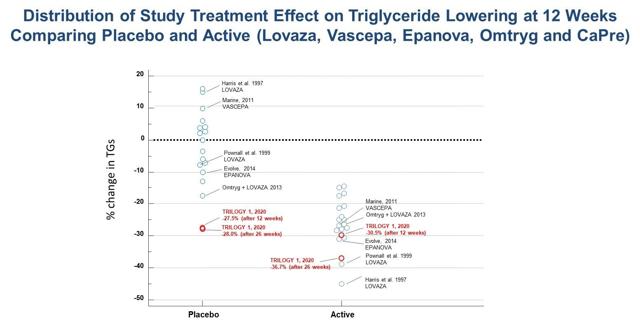 ACST provided a snippet comparing their placebo response versus historical placebo responses from other trials. They also noted that there were 5 sites, out of 54, that contributed disproportionately to the high placebo response and are now actively investigating it. However, as a result of extra work pertaining to the audit, the release of TRILOGY 2 results will be delayed to February, as opposed to by the end of January.

That being the case, the question is whether TRILOGY 2 will also be tainted by a large placebo response. Regardless, the TRILOGY 1 results will likely lead to additional delays to market, even if TRILOGY 2 works, as they try and figure out what to do next. Beyond that, there is also a second issue.

Both Matinas (MTNB) and ACST are trying to get their respective formulations into the market, but even then, they will be met with more headwinds than before. 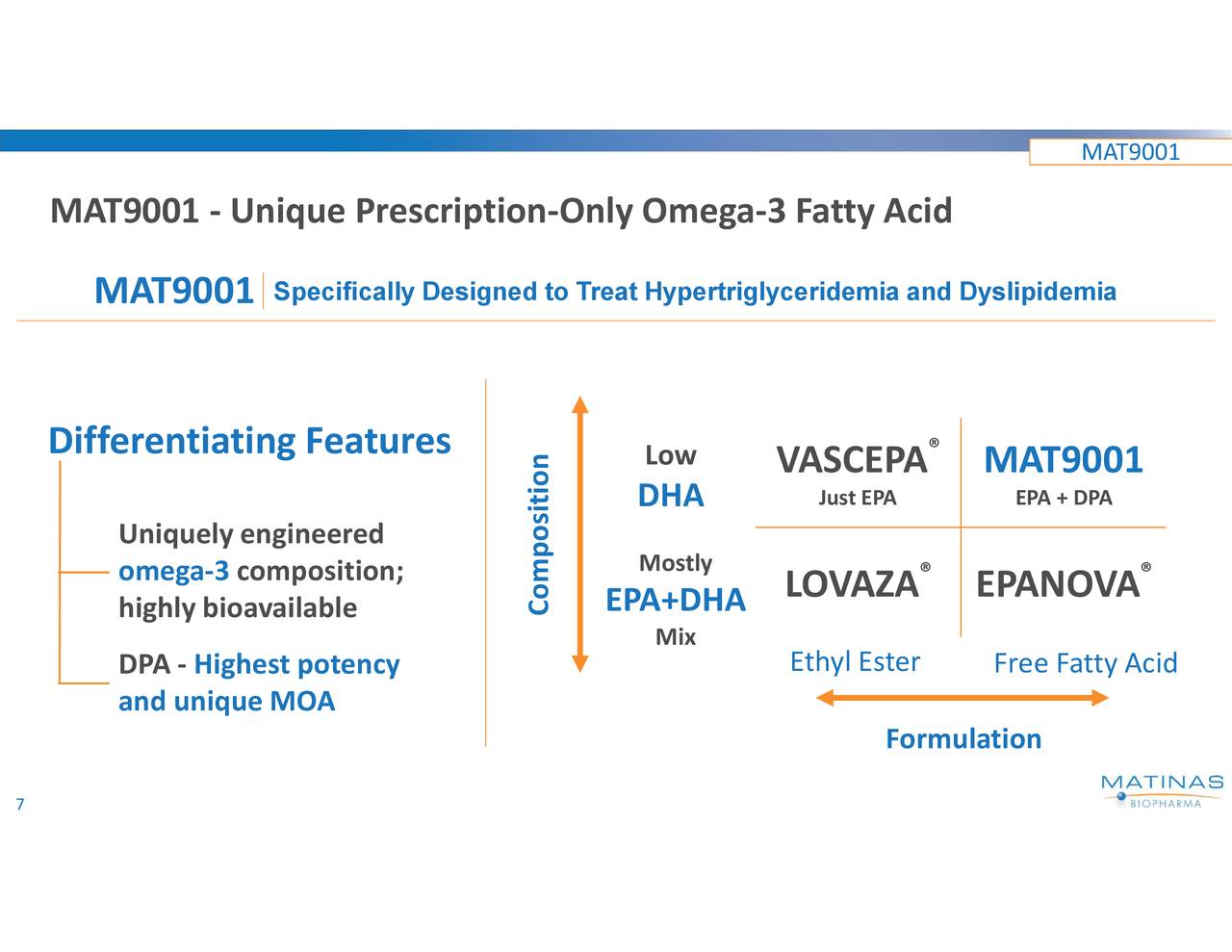 While AMRN's EPA-only pill led to a successful REDUCE-IT trial, AZN's Epanova, which had both DHA and EPA, met with failure. This would strongly suggest that DHA can potentially counterbalance EPA's beneficial effects. With this in mind, clinicians may be less inclined to prescribe any formulation that contains both DHA and EPA going forward, even if they can induce a better lipid profile change. As mentioned in greater detail in our ACST article and comments, lipid changes do not always correlate with cardiovascular benefits as cleanly as some would believe. As such, without more cardiovascular data, both ACST and MTNB would likely see low adoption rates.

In contrast to all its competitors, AMRN is looking much better, although there is a cloud or two in the sky. On the same morning as AZN and ACST's failed trials, AMRN announced their new marketing/educational campaign, True To Your Heart, in an effort to educate people on cardiovascular health and why dietary supplements (i.e. fish oil) are not the answer. Needless to say, combined with the failed STRENGTH trial, AMRN will have a lot of ammunition to work with.

Moreover, Vascepa prescriptions will likely be seeing a larger uptick. Vascepa's biggest competitor currently is generic Lovaza, which contains both EPA and DHA. As the STRENGTH trial results propagate through the community, it is likely that current users of generic Lovaza will migrate to Vascepa, as there are no other options on the market. This, along with the label expansion in December 2019, will likely translate to accelerated prescriptions as we move past the first quarter or two. Given that none of this was taken into account when AMRN issued their 2020 preliminary guidance of $650-700M in revenue (vs. est. of $425M in 2019), they will likely well exceed their guidance.

That being said, generic companies are now trying to get into the market and AMRN is embroiled in a lawsuit against them. With the patent trial scheduled to start on Jan 13, the lawsuit will likely act as a dampener on AMRN's share price.

Given recent developments in the omega-3 world, AMRN's Vascepa has literally become the market. Epanova has failed one of the biggest DHA+EPA cardiovascular outcomes trial to date. Likewise, ACST has announced some less than appealing topline results for one of their two phase 3 trials for CaPre. Moreover, current results seem to suggest that DHA may potentially counteract the benefits of EPA, so any formulation containing both EPA and DHA (i.e. all current/potential competitors) will likely fare poorly until they get an outcome trial out, which will take years. Given the tailwinds, AMRN will likely exceed their 2020 revenue guidance. However, there is a cloud in the sky in the form of a patent lawsuit, which will likely suppress AMRN's value until it clears up.

Author's note: For more articles, please visit my profile here. If you want to receive notifications for new publications, then click the "Follow" button in my profile. Thanks for reading and good luck.

Follow BioTrench and get email alerts
+
Add a comment
Disagree with this article? Submit your own.
To report a factual error in this article, click here.
Your feedback matters to us!