IAMGOLD gets permit for the Boto Gold project in Senegal.

The stock missed the gold price upside completely. It looks like the market is too skeptical about the company - current levels look interesting as an entry point.

IAMGOLD (IAG) has recently announced that the government of Senegal has approved the mining permit for its Boto Gold project for an initial period of 20 years. Boto Gold is one of the two main development projects of the company - the other one is named Cote Gold. Last year, the company’s decision to put Cote Gold on pause led to a relief rally in IAMGOLD shares, as the market was worried about big capex requirements of a low-grade project. It looks like the company’s management team has learned the lesson and is advertising the Boto Gold project in a cautious way: “Work is already underway to obtain approvals for the next steps, supporting either a decision to proceed to full construction or further de-risk prior to construction approval”. 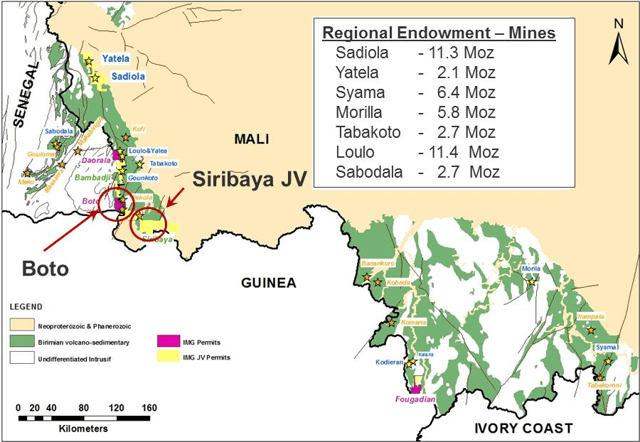 So, what is Boto Gold? The project’s owners are IAMGOLD (90%) and the government of Senegal (10%). The project is expected to produce 130,000 ounces of gold annually at all-in sustaining costs (AISC) of $842 per ounce over the life of mine (11 years). Over the first six years of production, the mine is expected to produce 160,000 ounces annually. Thereafter, production will decline to 94,000 ounces per year. The average grade is expected to be 1.71 g/t, which is much higher than Cote Gold’s 0.97g/t and should give investors more confidence about the sustainability of the cost structure.

Despite the rapid increase in the price of gold which occurred in 2019, the market is still cautious about big capex spending for gold miners. Thus, the project’s price tag is very important. IAMGOLD estimates that the initial capital required to construct Boto Gold is $271 million. The company finished the third quarter of 2019 with $650 million of cash and short-term investments on the balance sheet. IAMGOLD’s long-term debt stood at $400 million. As of 3Q 2019, this debt consisted primarily of $384 million of 7% senior notes due 2025. Given the positive trajectory of the gold price (I’m long-term bullish on gold), IAMGOLD has to either deal with debt (the monetary position on the balance sheet brings nothing close to 7% that the company has to pay to bondholders) or invest money in a project whose financial performance is going to be more attractive than paying down debt.

At this point, IAMGOLD expects that Boto Gold will have an after-tax IRR of 22.6% and a payback period of 3.2 years. The gold price assumption used in the analysis is $1350 per ounce, while the assumption for the oil price (impacts fuel costs) is $65 per barrel. The gold price is comfortably above $1350 per ounce, and I do not see any catalysts that can bring so much downside to gold in the foreseeable future. However, many gold projects of the previous decade were plagued with cost overruns and mines’ underperformance, so all pre-production calculations should be taken with a grain of salt. In fact, problems at IAMGOLD’s mines led to a loss in the third quarter despite the favorable gold price environment, so worries about the company's ability to make a good project without major problems have some merit. IAMGOLD’s recent share price performance shows that the market is not ready to believe that the management team will be able to deliver improved results - investors and traders will clearly wait for confirmation of positive changes.

At the same time, analysts are still expecting a major improvement in IAMGOLD earnings in 2020. In case the company manages to deliver results close to expectations, the stock will have material upside from current levels, as the gold price upside has not been factored into IAMGOLD share price.

In my opinion, IAMGOLD shares are looking interesting at current levels. Technically, the stock is at a major support level. Fundamentally, the price of gold should lead to positive earnings performance, while the Boto Gold project looks much more appealing than the Cote Gold project due to lower capex requirements and higher grades.

Disclosure: I/we have no positions in any stocks mentioned, but may initiate a long position in IAG over the next 72 hours. I wrote this article myself, and it expresses my own opinions. I am not receiving compensation for it (other than from Seeking Alpha). I have no business relationship with any company whose stock is mentioned in this article.

Follow Vladimir Zernov and get email alerts
+
Add a comment
Disagree with this article? Submit your own.
To report a factual error in this article, click here.
Your feedback matters to us!