Canada's Big Six banks are cornerstones of retirement portfolios across the country.

Back-tested strategy that has outperformed in 14 of the past 20 years.

Buying the worst performing bank - is it still a viable strategy?

Recently, fellow Seeking Alpha Contributor Dale Roberts wrote an informative piece on his blog Cut the Crap Investing called: How do you invest in the Canadian Market?

I highly recommend the article as it is a very interesting piece that collates simple investing strategies. Strategies that have been back-tested and proven to be outperformers.

There was one, however, that caught my eye entitled: Buy the Canadian bank that sucks. At its core, the premise is very simple - the worst-performing Big Six Bank of the year typically outperforms in the year following.

For those unfamiliar, here are the Big Six Canadian Banks, five of which are dual-listed:

The idea was brought forward by Globe and Mail investment reporter David Berman. Canada's Big Banks have been some of the most reliable investments and have consistently outperformed the TSX Index. They have paid out un-interrupted dividends for over a hundred years, and are the cornerstone of retirement portfolios across the country.

Why did this strategy catch my eye? It is a strategy that I've heard about before and one that I believed may no longer be relevant.

Here was my off-the-cuff response to Dale on Twitter:

My response was anecdotal at best and not backed up by hard facts - hence the words "I think."

Today, we crunch the numbers. Is buying the bank that sucks still a good strategy?

I first came across the strategy back in late 2016 when I read Berman's previous article on the topic. That year, the Canadian Imperial Bank of Commerce was the worst-performing bank. Here are the worst performers of the past three years with their returns in brackets:

The last time the Bank of Nova Scotia was the worst-performing bank? 2014. More on that later.

For now, let's take a look at the past three years. 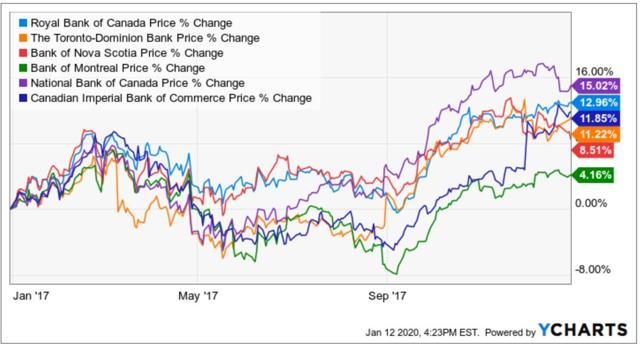 Although it didn't crush the market, the strategy proved successful as CIBC returned 11.85%, 123 basis points above the average. 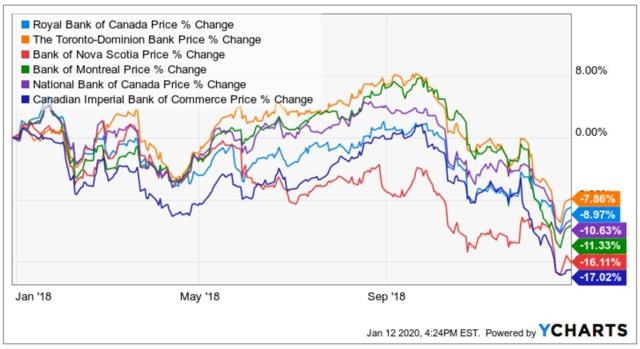 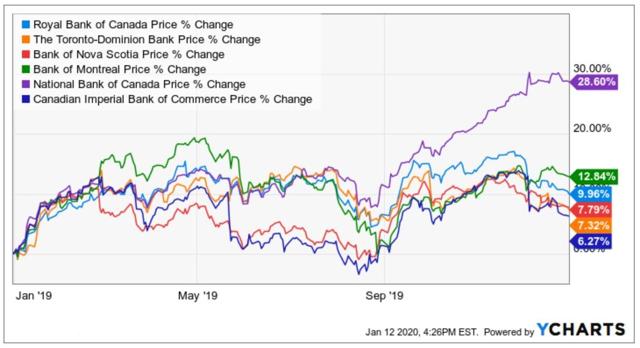 Somewhat skewed to the upside by National Bank's strong performance, the Big six averaged a 12.13% return in 2019. Unfortunately, and for the first time in the past three years, the strategy failed. Not only did 2018's worst-performing bank not outperform, CIBC brought up the rear once again.

That means in three of the past four years, the Canadian Imperial Bank of Commerce was the worst-performing bank in Canada. It is, therefore, not surprising that I thought the strategy was no longer relevant.

To my surprise, however, the strategy did in fact work twice in the past three years. You'd have to go back to 2014 to find the last year in which the strategy failed.

It looks like my response to Dale was partially incorrect. Although CIBC and the Bank of Nova Scotia have underperformed, the strategy itself was fine.

Buying the bank that sucks does appear to be a strategy that is still relevant today. For four straight years between 2015 and 2018, the worst-performing bank beat the Big Six Average.

It is worth noting, however, outperformance has been on a steady decline between 2016 and 2018 before finally failing this past year.

Is this a sign of things to come? It is certainly worth monitoring. Will the strategy work in 2020?

As of writing, Canada's banks are cheap and on average they trade at a 10.44% discount to their historical P/E ratios. The lone bank trading above average? National Bank (+7.05%). What about CIBC? See the F.A.S.T. Graph below. 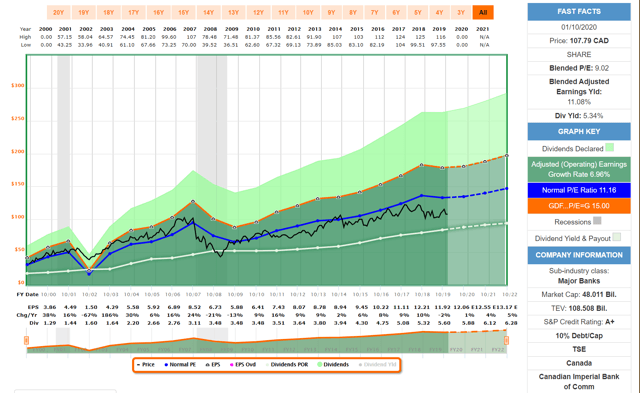 The bank trading at the biggest discount (19.18%) to historical averages. If it returns to trade in line with averages, it can certainly outperform in 2020. In fact, all it needs to outperform is close the gap as CIBC is trading at almost double the discounted average.

I suppose it is time to go back and correct my statement. Buying the bank that sucks is still a viable strategy. At least for now.

Disclosure: I am/we are long BMO, TD. I wrote this article myself, and it expresses my own opinions. I am not receiving compensation for it (other than from Seeking Alpha). I have no business relationship with any company whose stock is mentioned in this article.

Follow Mat Litalien and get email alerts
+
Add a comment
Disagree with this article? Submit your own.
To report a factual error in this article, click here.
Your feedback matters to us!