An S&P rally to 3,300 is "a distinct possibility," Cantor Fitzgerald’s Peter Cecchini wrote last week, in the course of suggesting, in no uncertain terms, that US equities are overbought.

Fast forward a few sessions and SPX 3,300 is even more of a "distinct possibility." In fact, at 3,281 (as of Wednesday morning), you might even call it a foregone conclusion.

Although Cecchini called stocks trading at current valuations "simply ludicrous," he cited the irresistible pull of "FOMO" in suggesting that things could get more ludicrous still.

Suffice to say Cecchini’s 2019 SPX target of 2,390 didn’t pan out, but the gauge’s nearly 30% rally last year isn’t stopping him from harboring what looks like the most bearish view on the street for 2020. His year-end target is just 2,880 this year.

Given that, it won’t surprise you to learn he’s bullish bonds and thinks 10-year yields will likely hit 1.25% sometime before the end of the year as the US economy stumbles into what Cantor believes could be an outright downturn. "Risks of a 2020 US recession are significantly elevated," Cecchini says.

It’s hard not to sympathize with Cecchini. Even a cursory glance at a variety of simple metrics suggests a correction is likely for equities and, as I've mentioned on numerous occasions over the past two weeks, the reflation narrative that dominated in Q4 (when Value and Cyclicals looked poised to take the baton) has given way to a rally led by the old standbys in 2020.

For those hoping to see a growth inflection, that is not a good thing and suggests a meaningful bond selloff is unlikely.

Meanwhile, Q4 earnings season should show profits contracted for the second consecutive quarter, putting the US in an earnings recession for the first time since 2016.

While consensus expects profit growth to bounce back, there are legitimate concerns about margin pressure, and if the US does slide into a shallow recession (as the likes of SocGen believe), the prospects for a robust recovery in earnings growth will be commensurately diminished.

But there’s one, overriding problem with any bear thesis on equities – namely this:

Peter is apparently a skilled boxer, but depending on how hard the Fed wants to punch, that is a fight that is difficult to win short of a deep economic downturn, at which point Fed cuts and balance sheet expansion are seen more as a symptom of the malaise than an excuse to lean into risk assets.

Morgan Stanley’s Mike Wilson – whose fame got a big shot in the arm in 2018 when he predicted the Q4 tech selloff – is no stranger to being more bearish than the street, but he too recognizes that fighting the benefactors with the printing presses is difficult.

"We continue to view central bank activity as an important driver of asset prices in the near term given the lackluster improvement in earnings revisions," Wilson wrote Monday.

He went on to flag what he calls "an unprecedented divergence" between the YoY change in the S&P and earnings revision breadth. 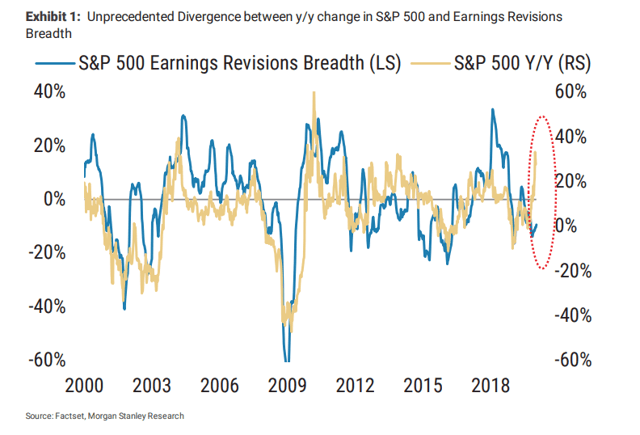 And yet, as he’s quick to point out, "with $1.2 trillion in annualized balance sheet expansion from the Fed, ECB and BoJ ongoing, we think stocks will have a difficult time selling off much and think any correction in the S&P will be limited to 5% or less."

With that in mind, I'll leave you with a good passage from a note Cecchini published over at Ben Hunt’s Epsilon Theory back in November - I imagine readers here will sympathize with him, even as you revel in your gains:

The distortions QE has created (especially where QE produced negative rates) will be difficult to unwind. It is important to remember that the balance sheet expansion needed to execute on QE policies ultimately works through the suppression of term or risk premia. It is not through a quantity of money mechanism. Little firepower is left in most of the developed world for QE to have more impact, and we conclude more harm than good has already been done through negative rates policy. Overall, there are few levers left for central banks short of moving to purchases of equities (as in Japan). That leaves fiscal policy, which is notoriously inefficient and has empirically disappointed as a stimulant to growth when compared to good old fashioned productivity gains. These gains are harder to achieve when low rates keep zombie companies afloat. The seeds of aggressive rates policy and negative rates were sown in the late 1990s, and they have sprung into large dogmatic trees, which should soon be cut down.

The Heisenberg
29.15K Followers
Perhaps more than any other time in the last six decades, the fate of markets is inextricably intertwined with the ebb and flow of geopolitics. It's become increasingly clear that one simply cannot fully comprehend market movements without a thorough understanding of concurrent political outcomes. Drawing on extensive experience in both politics and finance, Heisenberg will help demystify a world in which investors can no longer hope to conceptualize of markets as existing in anything that even approximates a vacuum.
Follow

343 Comments
To ensure this doesn’t happen in the future, please enable Javascript and cookies in your browser.
Is this happening to you frequently? Please report it on our feedback forum.
If you have an ad-blocker enabled you may be blocked from proceeding. Please disable your ad-blocker and refresh.