EU natural gas pricing has been a severe headwind for Gazprom's profitability during 2019.

This headwind is still getting worse.

This headwind might have an impact on the dividend. 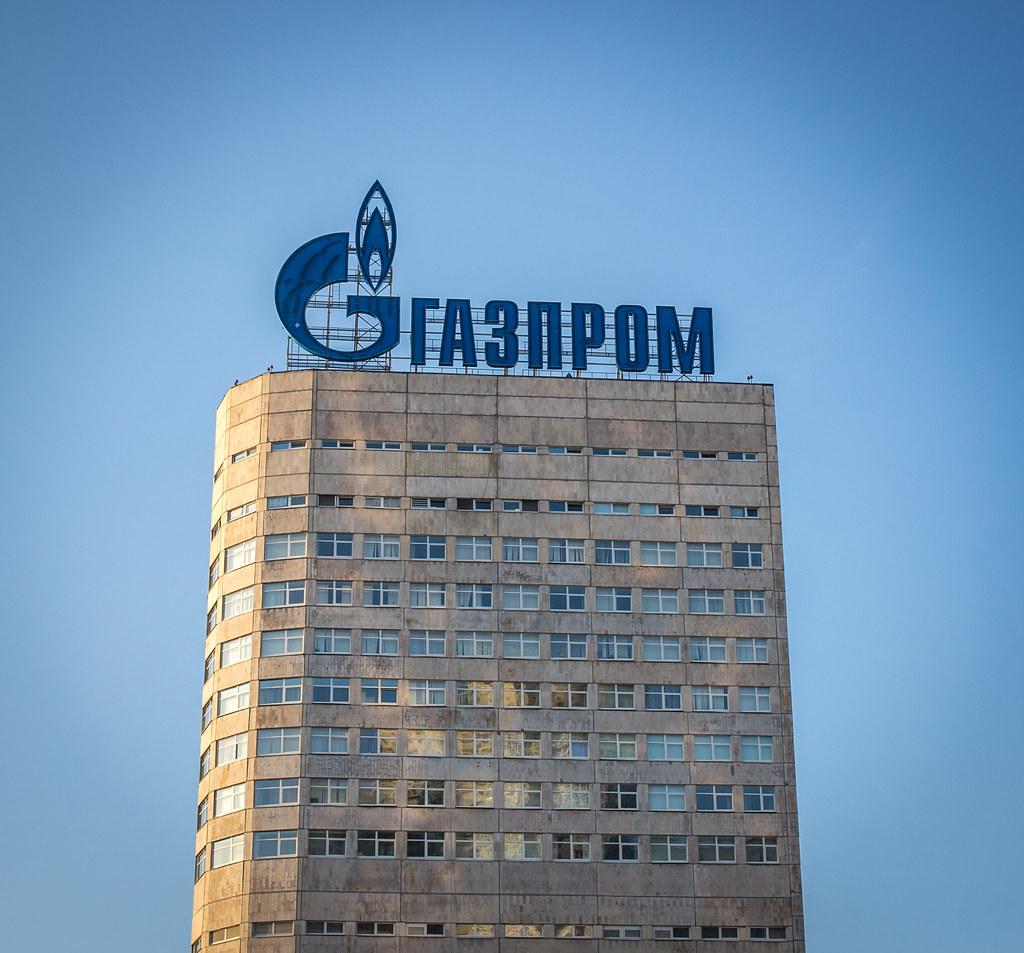 I have been warning that the drop in natural gas pricing in Europe poses a large headwind for Gazprom (OTCPK:OGZPY). I have also written on how at the 9M 2019 waypoint, the impact from this natural gas pricing drop was already evident in Gazprom's P&L statement. At the time, there was still hope that things could turn around in terms of natural gas pricing.

However, as time went by, things have gotten worse still. Moscow has seen its warmest winter for the last 133 years, and weather, in Europe, has also been widely unfavorable and is expected to remain so during February and March. 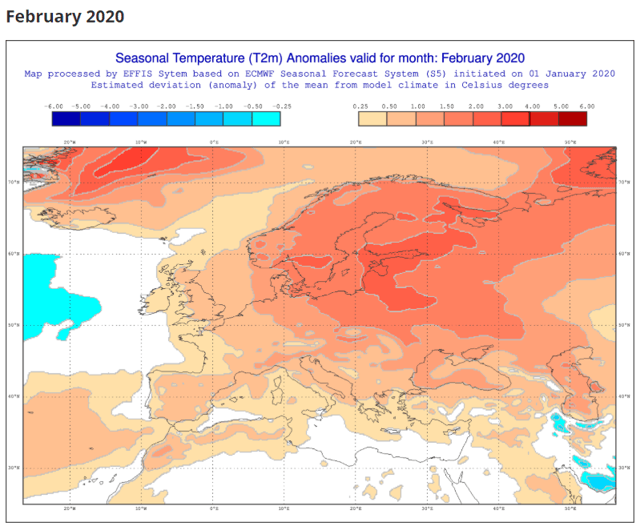 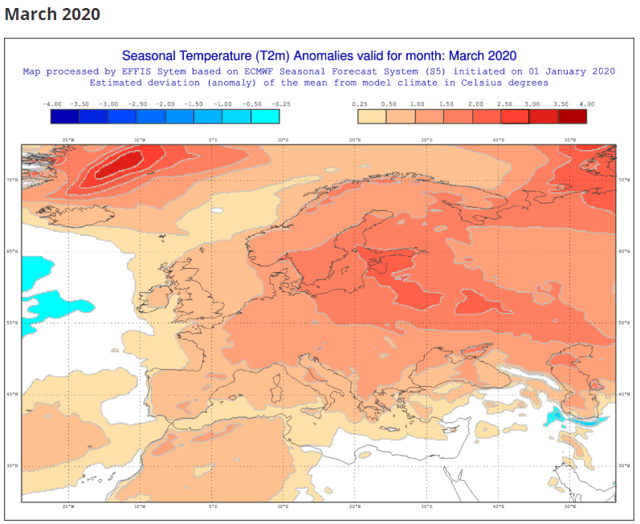 This has meant that instead of improving, EU natgas pricing has just kept on falling:

In the face of this, hopes for Gazprom stock have been kept high because:

I'm writing to say that if the EU natural gas situation persists, these hopes might be wildly misguided. Let us see why.

When it comes to dividends, a much higher payout ratio needs to be confronted with the potential drop in earnings. This potential drop is severe. As of Q3 2019, Gazprom's operating earnings were already falling 62% year-on-year. If this kind of drop flows all the way through to net profit, it destroys the entire improvement in payout ratio out to 2021, and even more.

This drop has not yet flowed through to net profits mostly because of forex gains. However, it remains to be seen how much these gains will be considered for the 2019 dividend payout, after all, Gazprom does not promise a 30% payout on straight IFRS earnings. Instead, it promises such a payout on adjusted IFRS earnings (adjusted for non-cash earnings). Forex effects are adjusted out, so even for 2019, Gazprom is likely already looking at a significant adjusted profit cut: 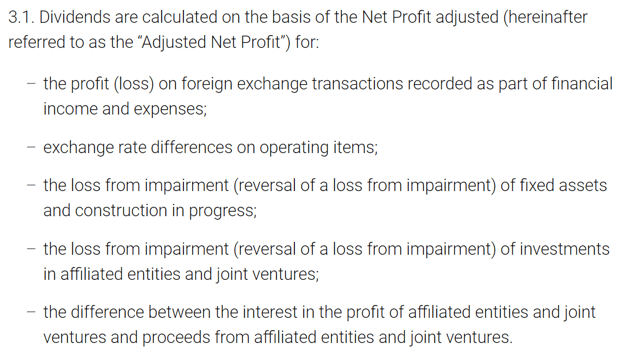 Were these natural gas prices persist during 2020, 2020 earnings would come in massively below 2018 and 2019. Perhaps as much as 60% below. Russian companies are very generous with dividends, but they're also very quick at reducing dividends if profits drop substantially. Indeed, in its new dividend policy, Gazprom no longer ties dividends to prior year dividends.

A lot of faith regarding improvement in EU natgas pricing was put on Gazprom's presentation and its claim that spot prices were already up 90% from the summer lows. 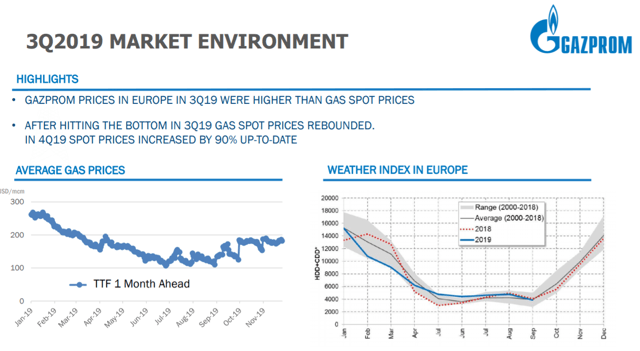 This is misleading. Natural gas pricing is very seasonal. Natural gas is much more expensive during the winter.

The correct comparison to make is to compare prices year-on-year. As we saw in the previous Dutch price chart, natural gas prices have continued to drop rapidly in Europe. They're not at the summer lows, but they're down as much year-on-year as they were during the summer, if not more. Hence, the profit impact will be just as severe in Q4 2019 as it was in Q3 2019, if not more severe still.

Obviously, completing Turkstream and Power of Siberia and then operating those pipelines is a positive. It leads to reduced capex, which is what's giving Gazprom increased confidence for the dividend payout.

That said, unfortunately, these pipelines won't immediately have a large contribution to profits. Indeed, it's even more likely that they'll initially contribute negatively to net profits. The reasons are as follows:

Remember, for these projects to lead to higher dividends, they need to help IFRS profits. They won't, at the start.

Moreover, margin (price) is more important for Gazprom's profitability than volume. These projects cannot save profits from that angle, either, if the negative natural gas pricing persists.

The current EU natgas pricing ensures that Gazprom will continue to report extreme profit drops for Q4 2019 and Q1 2020 at the very least.

These extreme profit drops will counteract any dividend payout increase in the short term. If this EU natgas pricing persists, Gazprom's dividend will go down, not up. Moreover, with ugly Q4 2019 profits and depending on IFRS adjustments for forex gains, even the 2019 dividend (to be paid in 2020) might already be at a risk of being reduced from 2018 levels.

The market might, at any moment, start discounting these impacts. For sure, any unfavorable news on the dividend front would lead to Gazprom stock dropping. And realization that IFRS profits are about to drop significantly might lead to the same effect.

I like Gazprom as a company. I've been long Gazprom in the past. However, the present environment is extremely negative for Gazprom and the market hasn't discounted this problem in the least. I see Gazprom's risk as very elevated here.

Idea Generator has beaten the S&P 500 by around 39% since inception (in May 2015). There is a no-risk, free, 14-day trial available for those wanting to check out the service.

Follow Paulo Santos and get email alerts
+
Add a comment
Disagree with this article? Submit your own.
To report a factual error in this article, click here.
Your feedback matters to us!