The car industry is currently undergoing radical change, nobody can deny that.

Volkswagen still has some catching up to do, especially when it comes to the "in-house" factor.

The company is doing quite a bit here. The steps Volkswagen is taking will further strengthen the company's position in the automotive market in the future.

The car industry is currently undergoing radical change, nobody can deny that. Legal requirements for environmental protection and Tesla's (TSLA) offensive have forced companies to follow suit. Volkswagen (OTCPK:VWAGY; OTCPK:VLKAF; OTC:VLKPF) had to feel this too. Furthermore and unfortunately, the introduction of electric vehicles into the mainstream came at a time when Volkswagen itself was facing extreme legal and regulatory problems. Nevertheless, I don't believe that Tesla will destroy everything and dominate the market for electric cars alone. At the moment, I even think Volkswagen is a better investment. I described this in more detail in a comparative analysis last week (click here to read it). Nevertheless, Volkswagen still has some catching up to do, especially when it comes to the "in-house" factor. But the company is doing quite a bit here. In this article I would like to analyse the situation in more detail for my readers.

Companies start to produce their products completely in-house. In a way, this reverses the trend towards outsourcing. This of course has its disadvantages. First of all, you need the resources yourself, you have to adjust know-how and, first and foremost, you have to finance it. That in turn can put an extreme strain on the balance sheet for a few years. Conversely, there are also many advantages. Companies become more independent. They can better protect their know-how and retain control over the production processes. Apple (AAPL) for example is planning to become a kind of a "closed-loop" manufacturer. But Tesla is also a good example of a company that produces a lot in-house.

Speaking of Volkswagen, however, the problem here is that Volkswagen currently only develops 10 percent of its technology in-house. With the reasons explained above, this can be a problem, because especially the production of EV's is quite different from the production of conventional cars.On the one hand, much fewer individual parts are needed, and the trend is continuing towards more and more software solutions. With regard to these developments, it is certainly better for companies to rely on in-house solutions than to become dependent on other suppliers.

Right now, as many as 70 control units with operating software from 200 different suppliers need to be integrated into Volkswagen's vehicles, while Volkswagen uses different systems with similar functions, such as for infotainment and navigation. So you can see how inefficient this is. But Volkswagen has also recognized this and intends to take massive countermeasures. Volkswagen is planning a standard operating system called "VW.OS" and a cloud for all cars of the company. Overall, Volkswagen is investing a total of USD 9 billion. The ambitions are quite impressive. By 2025, 60 percent of software development will be in-house. Furthermore, all new models are to run on this platform from 2025. The first vehicle based on vw.os will be the ID3 battery-powered compact hatchback. To achieve these goals, Volkswagen plans to restructure itself and create a new group / segment called "Car.Software". This group will employ 5000 people. Over the years, the number of software developers is expected to rise to over 10000 by 2025. The developers will then work on solutions for e.g. Connected Car, Intelligent Cockpit, driver assistance systems, automated driving, vehicle motion / energy: 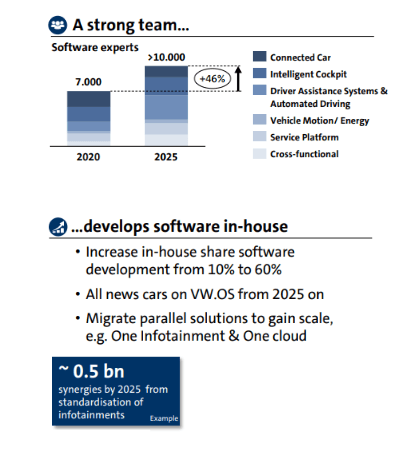 Volkswagen is thus making further progress with its transformation. The company is also trying to simplify on the "hardware" side. For example, the so-called MQB (="Modularer Querbaukasten", eng.:modular transverse construction kit) platform, on which essentially all cars are based, has been around for a few years. By 2022 the complexity of the platform should be reduced by 40 percent. Accordingly, Volkswagen is tackling this issue on several levels and is making massive efforts to avoid complexity of the manufacture proceedings. In the future, the company also expects to achieve cost parity between EV and conventional cars in production:

Volkswagen is in an extremely strong position and can therefore move forward with the change without any pressure. Despite the weakening economy, the company is still doing extremely well in operational terms. Last year, the company delivered 6,278,300 vehicles throughout the world, exceeding the prior-year figure by 0.5 percent: 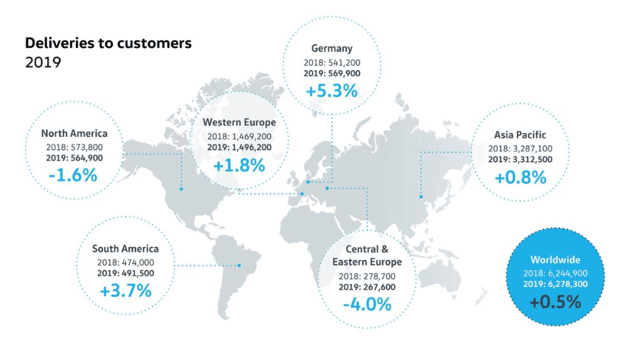 (Source: Deliveries to costumers in 2019)

Furthermore, Volkswagen delivered more than 80,000 electric vehicles, corresponding to a marked increase of about 60 percent. This is still a long way from Tesla, but the growth is still enormous. I'm convinced that it will only be a matter of a few years before Volkswagen could compete with Tesla in terms of the absolute number of deliveries. Until then the company will continue to generate a lot of profit and net income:

In addition, Volkswagen is still extremely favorably valued compared with its peer group. From my point of view, particularly with a view to the future, the company still seems to me to be undervalued:

Volkswagen is making further progress with its transformation. Investors who are looking for opportunities to invest in the automotive industry will find Volkswagen to be an excellent opportunity and a lot of value. The company addresses future growth in a very reasonable way, but operates from a strong financial and economic position.

If you enjoyed this article and wish to receive long-term investment proposals or updates on my latest research regarding my investments, my retirement portfolio or antitrust and regulatory issues, click "Follow" next to my name at the top of this article and check "Get email alerts".

Follow The European View and get email alerts
+
Add a comment
Disagree with this article? Submit your own.
To report a factual error in this article, click here.
Your feedback matters to us!