Among the nearly 6,000 companies taken into account by Innovalpha's models (Nasdaq, NYSE, and Amex), Merit Medical Systems, Inc. (NASDAQ:MMSI) has been identified as one of the leaders across all industries taking into account company's patent filing activity, in particular in relation to PCT (Patent Cooperation Treaty) applications. From PCT patent dynamics, Innovalpha provides a weekly patent index for all the 6,000 companies from which patent scores are computed as well as buy and sell signals and recommendations.

What is essential to understand is that models relying on PCT patent applications capture forward-looking innovation (recent patent activity analyzed), new products that may or are in the process of being launched, which translate into strong market outperformance versus current methods relying on granted patents (past innovation and with inherent drawbacks, e.g. models using U.S. patents will be U.S. centric). For the above reasons, Innovalpha does not assess the value of a patent per se, which, in addition, is probably an impossible task even for a patent/field expert.

As a consequence, detection of companies with PCT clusters/patterns is of particular relevance for the investor, as one can expect such companies to develop and launch new products soon which will hopefully translate into higher market valuation (detection of promising innovation-driven and patent-centric companies). At the minimum, such recent patent patterns reflect management belief that such PCT innovation deserves consideration with consequently substantial financial and human resources allocated through increased patent-filing activity over a defined period of time, a clear indication of growth within a company which makes sense for the rationale as it underlies a sustainable innovation/business (actual innovation is a core/fundamental value of a company).

Indeed, alpha lies in expectations not in past innovation already part of companies' market valuation. Further, our patent models show that patent size doesn't matter (presently, the market doesn't confer a value to important patent portfolios, on the contrary). As a consequence, big patent portfolios are not indicative of future stock market increase. We believe that the combination of Patent Dynamics with financial analyst opinions will increase the likelihood of stock outperformance. An important takeaway is therefore that the number of patents held by a company is not relevant, what matters is PCT patent dynamics. 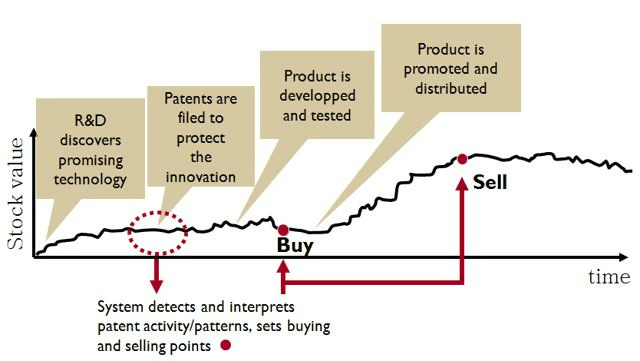 MMSI is a PCT innovation-centric company as it files PCT applications with clusters/patterns identified (PCT patent dynamics), translating into positive patent scores as shown below which may materialize into new products and equity return. Here, in addition to MMSI's patent dynamics analysis, writer's technical analysis is provided.

Five factors are taken into account in order to reach a conclusion:

MMSI displays good scores, in particular for risk and value scores with a value of 80.4 and 36, ranking the company 16th and 5th respectively out of 533 industry competitors (in NASDAQ, NYSE, and AMEX).

The company displays a high overall patent score of 126.4, which is above average as it ranks MMSI 5th out of 533 industry competitors. The company is in Grade B, a very good grade (grades ranging from A to F, with A being the best grade).

Based on the historical data used, MMSI is considered a mid-stage company that is disruptive, with growth as well as a secure innovation star. It also indicates that MMSI is in relation to all companies in the health care sector:

A continuous increase can be seen for the minimum scores indicating a positive future outlook.

The patent value score is conferred by the market, computed from the out of sample backtestings. According to the models, a company is a:

Patent disruptive score is also related to patent activity and in particular to specific patterns of intense patent activity over a particular period of time. In general, it is more difficult for heavy PCT filers to display high values in such scores. Disruptors are more easily found in new emerging companies.

Figure 3 displays MMSI's patent index and stock price over time. Since Q2 of 2016, a steady growth can be seen for the index score and has been correlating with the stock price very well until recently. In July, a rapid decline in the stock price can be seen and this has created a huge gap between the index and price. Patent dynamics need to be analyzed in order to check if this is a false positive as the size of the patent portfolio is not relevant. If the index continues to rise, we can expect the price to follow and make new highs eventually.

The gap is confirmed with the patent dynamics scores leading to an undervaluation of the company and represents a potential buying opportunity according to all of the previously mentioned metrics.

Figure 5 shows the correlation between MMSI's patent value score and its stock price over time. For several years, since the start of 2016, an overvaluation of the stock price can be seen as it increased slightly faster than the value score. This has changed in Q4 of 2018 as the stock price could not make a new higher high and traded below 60 USD resistance while the value score continued to increase. Further, during the last months, the stock price has declined and has created a large gap representing a buying opportunity.

Throughout the last years, not much has changed in this distribution and indicates that the company remains focused on its key markets with Japan joining the club.

In terms of the various classes under which MMSI filed patent applications, the top two classes have remained constant throughout the 5-year period. An overwhelmingly large majority of patents were filed under: A61M - devices for introducing media into, or onto, the body (introducing media into or onto the bodies of animals a61d 7/00; means for inserting tampons a61f 13/26; devices for administering food or medicines orally a61j; containers for collecting, storing or administering blood or medical fluids a61j 1/05); devices for transducing body media or for taking media from the body (surgery a61b; chemical aspects of surgical articles a61l; magnetotherapy using magnetic elements placed within the body a61n 2/10); devices for producing or ending sleep or stupor.

This class has remained a clear leader, followed by:

With 3rd most popular being A61F, which has been overtaken by A61F.

Rest of the activity is distributed among 6 other categories and indicates some diversification in their patent portfolio.

Figure 8 shows the distribution of companies that are in the same sector as MMSI and indicates that almost all of them are based in the USA. 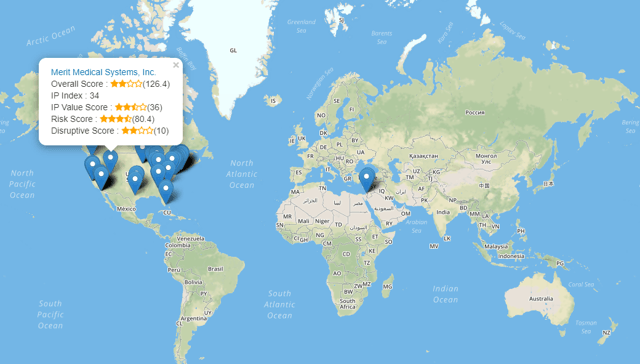 Figure 9 is a standard bubble chart showing Merit Medical Systems, Inc. in relation to its competitors with Patent index on the X-axis and overall score on the Y-axis (in all the bubble charts below the size of bubble is proportional to the PI index). MMSI can be seen as an industry leader, however, not an outlier as it is located close to several other companies. Let's check the patent dynamics bubble charts to get an accurate picture.

Figure 10 displays a bubble chart that compares the overall score with the patent value score and MMSI can clearly be seen as an outlier to the right. This indicates a very strong performance of the company as it creates innovations that have significant value and leads to giving it a bullish rating.

Figure 11 displays a bubble chart that shows the overall patent score and disruptive score with MMSI being an outlier on the right once again. This indicates that the company is one of the rare ones that are able to produce disruptive technologies and therefore, further strengthens the bullish rating.

Figure 12 displays overall patent score with a risk score and once again shows MMSI being among the industry leaders (several competitors with similar scores). This leads to giving the company a bullish rating when compared to the competitions, however, also indicates that there are companies that potentially are less risky.

Finally, Figure 13 shows us a long-term technical analysis of MMSI. The trend has been very bearish in the past months as the price peaked around 66.34 USD in October of 2018 and lost 70.61% to the current low of around 20 USD.

This also means that the price has reached a very important support level of 16-20 USD, which served as a very strong resistance several times in the last 2 decades and currently seems to be rejecting further downside as it continues trading higher for the past weeks.

Overall, this leads to believe that the retracement is over and considering that the stock lost 70.61% in little over 1 year, we can see the price as being undervalued and a great potential to the upside can be made in the upcoming years.

Therefore, we give MMSI a very bullish rating from the technical analysis standpoint.

Innovalpha
445 Followers
Innovalpha Sàrl is an independent company founded in March 2010 based in Geneva, Switzerland. The author is the originator of the IP models and founder of the company. He has more than ten years of experience in the Intellectual Property field as Patent Search Specialist and Patent Attorney. He is actually working as Legal Counsel and Intellectual Property Director for a small Healthcare company.

Additional disclosure: The information provided in this document is given for indicative purposes only. Innovalpha Sàrl provides no assurance as to its completeness or accuracy nor the reasonableness of the conclusions based upon such information. This document is not intended to constitute an offer or solicitation for the purchase or sale of an investment program or of any one or more of the models mentioned in the document. There is no assurance that the model's investment objectives will be achieved and investment results may vary significantly over time. Past performance should not be construed as a guide to future performance. The content of this document is subject to change without prior notification. All information and data presented in this document is for informational purpose only and should not be reproduced, distributed or used without the prior written authorization of Innovalpha Sàrl.
The World Intellectual Property Organization (WIPO) bears no responsibility for the integrity or accuracy of the data contained herein, in particular due, but not limited, to any deletion, manipulation, or reformatting of data that may have occurred beyond its control.