This research report was produced by The REIT Forum with assistance from Big Dog Investments.

Two Harbors (NYSE:TWO) has seen an interesting month with their preferred shares. We will be going over some of their current valuations, but mostly looking at what happened with the price around the recent ex-dividend date.

TWO-B (TWO.PB) has seen a significant climb in the share price. The current valuation looks absurd, especially next to TWO-A (TWO.PA).

If investors were choosing between those shares, then TWO-A looks like a better deal. Both have huge premiums to call value, several years of call protection, and switch over to floating rates. However, TWO-A is more attractive relative to TWO-B.

Note that TWO-A remains far away from our target buy-under price and is near the top end of its range also (near the overpriced level).

We will primarily be talking about TWO-D (NYSE:TWO.PD). First, we’d like to quickly touch on the common stock.

TWO is a non-Agency mortgage REIT. They have performed exceptionally well over the years by utilizing a combination of non-Agency RMBS and MSRs (mortgage servicing rights). We bought Two Harbors twice over the summer (both purchases are within the green box): 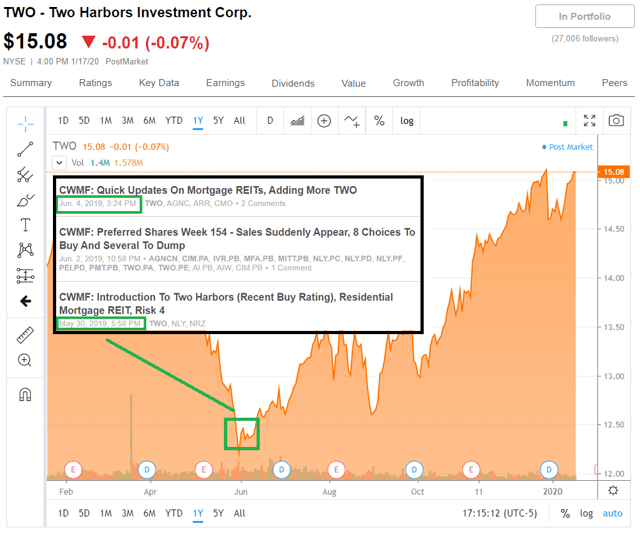 The first time was on 5/30/2019. We thought we had caught the bottom, but shares continued to dip a little further. We raised our positions significantly on 6/4/2019 at an even lower price. That time, we were more accurate in calling the bottom. TWO rarely trades at a significant discount to book value, but we had found an opportunity to capture that discount. We have since captured the gain on that position.

TWO has an excellent track record of delivering value to shareholders. This technique has allowed them to maintain book value and even grow it at times. However, the most impressive part of their performance, in our opinion, has been 2019.

Our current outlook on TWO is neutral.

We found shares extremely attractive when they carried a material discount to book value. We don’t see shares trading at the same opportunistic valuations today. Shares have materially outperformed what we expected when we initially bought the position. That outperformance was driven by a combination of larger gains to book value between May 30th and the end of Q3 2019 and a substantial increase in the price-to-book value ratio. Of course, the dividends didn’t hurt either.

The gains to book value were not a function of predicting future interest rate movements. They came from management making very intelligent decisions about where to allocate capital within a difficult environment. Their choices proved to be right and led to increases in book value per share. Despite the benefit of correct choices driving an increase in book value per share, the new valuation is enough that investors need to re-evaluate the shares. Currently, the price is not low enough to provide an attractive opportunity for establishing positions.

We will be going over two separate preferred share articles we sent to subscribers. We will clearly show dates as we move forward so you can follow along. Our primary goal is to show you how dividend captures work.

In Preferred Shares Week 182, back on 12/15/2019, we provided an example that we could purchase shares of ANH-C (ANH.PC) or TWO-D and look to capture a nice positive total return over the next few weeks. We might pay a price around $25.55 to $25.60 and look to unload the shares after they go ex-dividend for a price of around $25.30 if buyers are present. If buyers aren’t present at that price, we would just continue to hold the shares for a while.

For instance, if the market price was $25.05, we wouldn’t sell a single share. We would just hold onto them. We are not compelled to dump the shares, but we are willing to sell them if a buyer is willing to pay our price.

Example of the process:

In several cases, we ended up with returns better than 1% for significantly less than a month. However, we want to keep reasonable expectations.

We have no objection to owning any of these shares, so if the dividend capture doesn’t play out, we can just hold onto the shares for a nice source of income.

This is an important point about the dividend capture strategy. If investors are not comfortable owning the shares, they shouldn’t be making the trade. Investors who dump shares after the ex-dividend date with little regard for the price won’t have such a great success rate. Our goal is to identify shares we are willing to own where we see an elevated chance of shares performing well right around the ex-dividend date.

In an efficient market, dividend captures shouldn’t work. The entire premise of the trade is built around the idea that many investors don’t fully comprehend dividend accrual. In our experience, the technique works quite often because many investors in preferred shares simply aren’t used to thinking about dividend accrual enough.

How did the idea pan out?

While share prices declined for most of our top picks from week 182, the drop in the share price was significantly less than the dividend.

We don’t use dividend captures on common shares because the volatility in prices introduces too much luck. The relatively steady pricing of preferred shares allows us to have a high success rate with relatively little downside risk.

TWO-B is currently the most overpriced of the preferred shares from TWO. TWO-D turned out to be a great dividend capture. However, at current valuations, we view TWO-D as a hold even though it’s the most attractively priced preferred share from TWO.

Our outlook on the common stock of TWO is also a hold. Note, we are not applying ratings to TWO-A, TWO-B, TWO-C (TWO.PC), or TWO-E (TWO.PE). We see each share as being overpriced. However, we expect the dividend to offset a decline in the share price so that the total return (change in price + dividends) would be around 0% around the next several months. 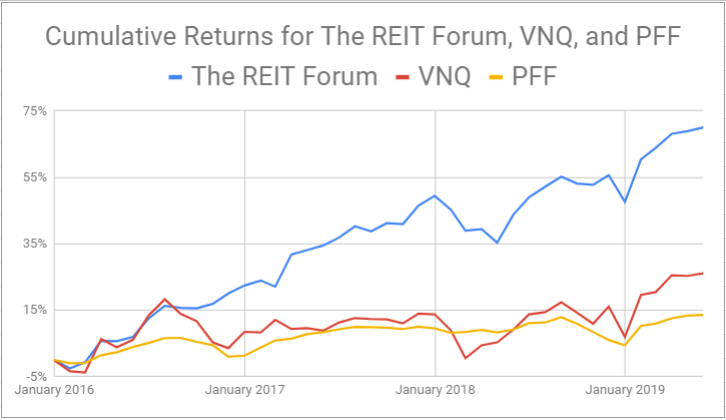 The REIT Forum is the #1 rated service on Seeking Alpha.

Try a Free 2-week trial today. You can use your Seeking Alpha account.

Colorado Wealth Management Fund
57.52K Followers
Author of The REIT Forum
The #1 REIT Service For Those Targeting Strong Total Returns
You want to be on The REIT Forum because it is the #1 REIT research service on Seeking Alpha measured by returns. Period. See our Tipranks page. How did we get there? We did a better job of managing risk and discovering opportunities. We didn’t jump into trashy high-yield equity REITs with the rest of the crowd. We cover securities for trading and securities for the buy-and-hold investor. We are clear about the difference and that enabled us to perform better since inception and better in 2020.

Disclosure: I am/we are long TWO-D. I wrote this article myself, and it expresses my own opinions. I am not receiving compensation for it (other than from Seeking Alpha). I have no business relationship with any company whose stock is mentioned in this article.