I have followed and written about Shopify (NYSE:SHOP) for years. I first invested in the stock in 2015 shortly after the company went public. I loved the company's easy-to-understand business model and its big moat in the e-commerce software business. This thesis became more visible when Amazon (AMZN) shuttered its webstore and referred the clients to Shopify.

I held my Shopify shares in December 2018, after I started fearing about the company's slowing momentum. I wrote about the decision to sell in this article. I then started buying the stock again in September when the stock was going through a selloff. I wrote about the decision to buy again in this article. The stock has gained by more than 42% since my last recommendation. In this article, I will review my investment thesis and explain why I have started to wind down my investment ahead of the February 13 earnings report.

A Decade of Success

This growth in e-commerce was great news for companies that invested in digital. This includes companies like Amazon, Wayfair (W), and eBay (EBAY). It was also a decade where traditional retailers like Target (TGT) and Walmart (WMT) started to invest heavily in e-commerce. Retailers, like Sears, who lagged behind in digital investments, went out of business.

Shopify was one of the biggest beneficiaries of the transition to e-commerce and omnichannel commerce. The company has seen its annual revenue increase from just $23 million in 2012 to more than $1 billion in 2018. It is expected to have made more than $1.5 billion in 2019. Shopify was also a key beneficiary of the drop shipping craze of the past decade. This is because it provided tools to start and run a dropshipping company within days.

Shopify has achieved this growth because it has created an e-commerce operating system for companies of all sizes. It offers low-budget startups a free platform to launch their store. As they become successful, they start adding more services like Shopify Capital, Shopify Pay, and Shopify Shipping. They also get access to the large Shopify App Store. All this has seen Shopify add more than a million merchants from around the world.

A Slowdown in the Horizon

Shopify has been one of the fastest-growing companies. In the most recent quarter, the company's revenue grew by 45% to more than $390 million. The company is expected to see an annual revenue growth of 44% in 2019. This will be lower than the 59% growth of the previous year. Still, it is a great number for a company that was started 16 years ago and one that operates in a crowded space. It competes with well-funded companies like WooCommerce, Wix (WIX), and Big Commerce. The chart below shows the slowdown of Shopify's annual revenue. 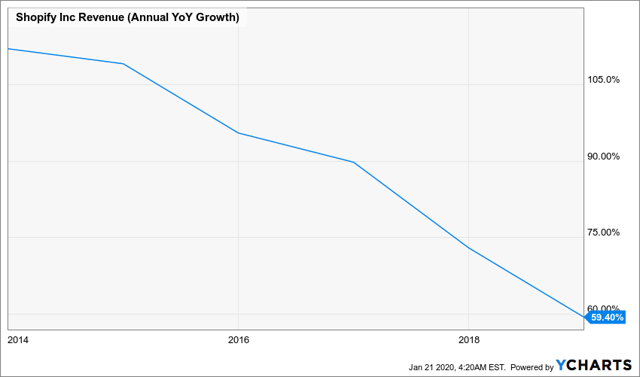 I expect this slowdown to continue as the overall growth rate of e-commerce sales start to decline. The company, which has more than a million merchants, will need to reduce churn and increase how it monetizes its installed base.

I also expect the company's user growth to slow down. This is simply because the past decade was a period when most big retailers started to implement their e-commerce strategies. I know no serious retail company that does not have an e-commerce platform already. The big stores are usually the best customers because they pay a higher monthly subscription of $299. They are also likely to pay for other additional features like Shopify Plus. Also, their churn rate is usually relatively minimal. Today, most big brands like Nike (NIKE), Lululemon (LULU), and Kylie Cosmetics already own their e-commerce stores.

Shopify will also likely see slowing growth from its dropshipping customers. The company's platform is one of the most popular platforms for drop-shippers. These are people who create referral stores. They mostly sell products from AliExpress and other Chinese stores at a higher price. As seen in the image above, Shopify creates ads that target drop-shippers. A YouTube search for Shopify Dropshipping shows videos with hundreds of thousands of views. Most of these videos are of people who are earning referral money from Shopify itself. While dropshipping has been a lucrative industry for some people, I believe that most sellers don't succeed. This could pose a challenge to Shopify's growth this decade. 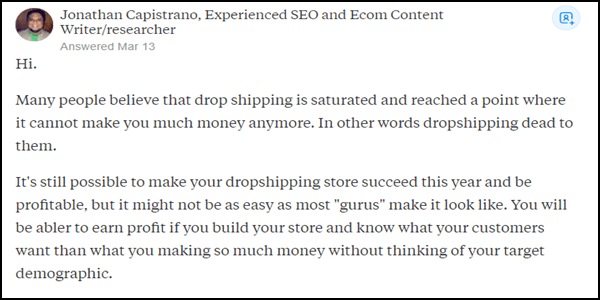 Shopify is a great company. As I have written before, I know this because my wife has been selling on Shopify for a few years now. She pays the $79 subscription and pays for some more services in the App Store. Hearing her talk about it was one of the reasons why I invested in the company.

While I expect Shopify's growth to slow, the reality is that the company will maintain a good number of subscribers. It will likely continue adding more users than it loses through churn. Also, I expect the company to end the decade while having an annual growth rate of above 15%, which is a reasonable growth rate for a company of this size.

However, I expect the management to start shifting from growth at some time. As a reminder, Shopify is a 16-year old company that has never made a profit as shown below. This is usually okay for companies that are showing significant growth like Shopify. 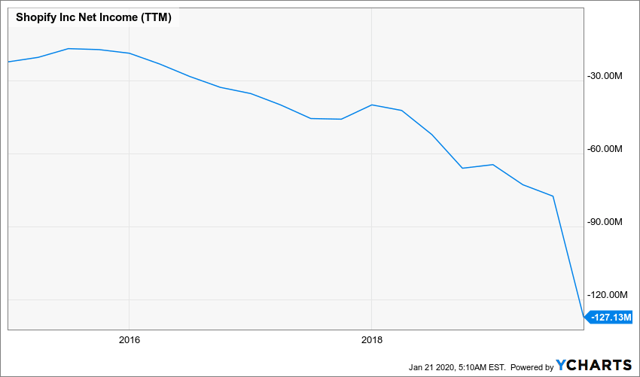 A common mistake that I, other Seeking Alpha contributors, and short-sellers have made is to base their thesis on the company's valuation. When you look at the headline and conventional numbers, the reality is that Shopify is an overvalued company. This is a loss-making company with annual revenue of $1 billion that is being valued for more than $52 billion.

While valuation matters, I don't think it matters for a momentum stock at this stage. This is because investors are not mostly focusing on earnings and losses. In most cases, they are focusing on top-line growth. This happens in all growth companies like Tesla (TSLA), Okta (OKTA), and Chipotle Mexican Grill (CMG). While Shopify's growth has and will continue slowing, it will take a few more years before the company is viewed as a value play.

As mentioned before, I have started winding down the investment that I made in September. The goal is to have no exposure in the company when it releases its quarterly earnings in February. This does not mean I am bearish about the company. The decision is meant to caution my portfolio against any downside risks that may come up after the earnings. In the past, momentum stocks tend to be a bit volatile even after a small earnings miss or weak guidance.

Crispus Nyaga
3.32K Followers
I am a financial analyst specializing in the technology, consumer, and industrial stocks. I operate a private office in Nairobi that invests in American and European equities. I am also the founder of rkdream.com, a financial media platform. Fellow contributor, Stella Mwende is one of my colleagues.

Disclosure: I am/we are long LULU. I wrote this article myself, and it expresses my own opinions. I am not receiving compensation for it (other than from Seeking Alpha). I have no business relationship with any company whose stock is mentioned in this article.