As media/news consumption continues to be increasingly digital in these modern times, the newspaper industry has been steadily eroding. This industry was ruffled at the end of 2019 when two massive players in New Media and Gannett merged to form what is now trading under the name Gannett Co. (NYSE:GCI). While the industry continues its secular decline, Gannett Co. is a newly formed behemoth that the investment community may not be sure what to do with yet. Most investors eyeing Gannett may desire its hefty dividend payment that yields a whopping 11% on its current stock price. While huge dividends (especially those paid by companies in a fading business model) often pose risk, the dividend is currently surprisingly sustainable based on short-term guidance from the company. We dive into what the new Gannett Co. looks like, explore this large dividend, and point out risks that investors need to consider.

A New Titan In The Newspaper Industry

The marriage of New Media Investment Group and Gannett was a merger so large that it had to gain antitrust approval from the Department of Justice. The merger gives Gannett Co. a virtual nationwide footprint through the company's publishing of USA Today, as well as exposure to 47 states via more than 200 publications. The company is a mix of printed and digital products. 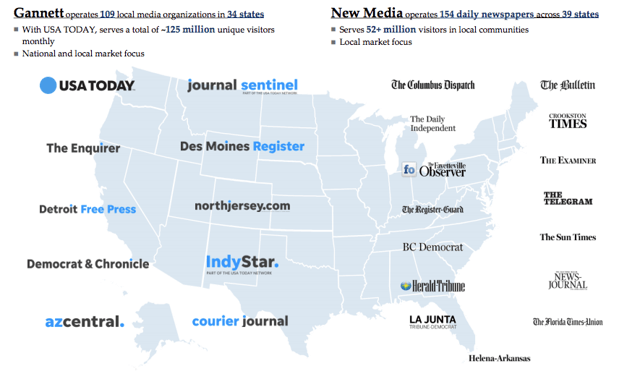 Given how many businesses in the newspaper industry have struggled with the transition from printed ad revenue to monetizing digital models, industry consolidation makes sense. The Gannett-New Media merger simply took consolidation to a massive scale. The newly formed entity will generate roughly $4 billion in annual revenues.

A Look At Gannett's Massive Dividend

The leading attraction for most potential investors will be a sizable dividend that Gannett now pays. The dividend is paid quarterly and totals an annual sum of $0.76 per share. The resulting yield on shares is a whopper at 11%. This exceeds US Treasuries multiple times over.

The company has left room in its cash flow streams to be able to pay down debt that totals $1.6 billion on a net basis. Management's stated goal is to deleverage to less than 1.75X EBITDA within two years.

While future dividend growth prospects will be determined by the company's progress in paying down debt as well as operational results, the dividend is very well funded barring a complete whiff on projected financials.

With the dividend seemingly secure for the time being, investors who may want to lock in a high yield will want to know what the operating landscape could look like moving forward. 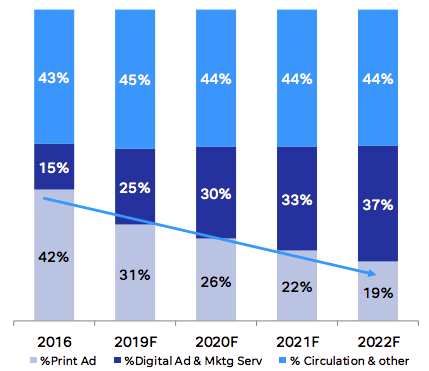 The company is growing its digital ad and marketing revenues. Currently Gannett has roughly 800,000 digital-only subscriptions, but expects that figure to grow. By FY22, it is targeting print ad revenues to have less than 20% contribution to total revenue. Transitioning from print to digital is where Gannett's large scale can really help because the company has such a large footprint in the market.

On the backend of the business, Gannett is also working on achieving cost synergies. The marriage of two massive (but similar) businesses will naturally have cost overlap. Gannett is targeting to cut roughly 7.5% of its overall expenses. 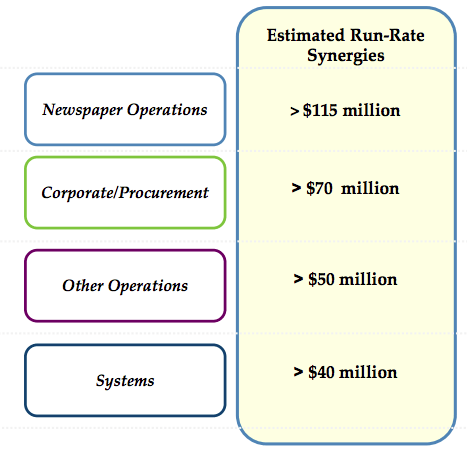 The majority of these savings are expected to be realized within the next two years and are the primary drivers behind the company's forecasted uptick in FCF in 2021 and 2022.

The market is sort of in a state of flux with Gannett following its merger. The stock has gained roughly 10% since the date of the merger close and now trades at just below $7 per share. 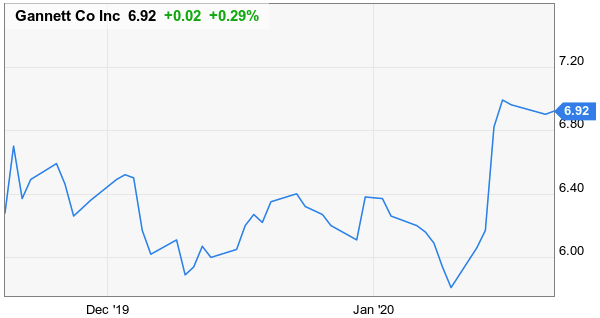 While historical metrics are essentially useless given the company's new structure, we can establish that the market has placed very low expectations on the company. With a market cap of just $850 million, the stock trades at a minuscule 0.21X sales. If the company hits on its FY2020 FCF projections of roughly $290 million, the resulting FCF yield is a massive 34.1%. Yes, there are challenges ahead and risks to consider (see below) that make Gannett a speculative investment, but there is upside here should target operational benchmarks be met.

There are two major risks that investors need to consider when looking at Gannett. While these are pretty out in the open, they are very real threats to Gannett's agenda. The first being the obvious and continuing decline of printed newspaper. 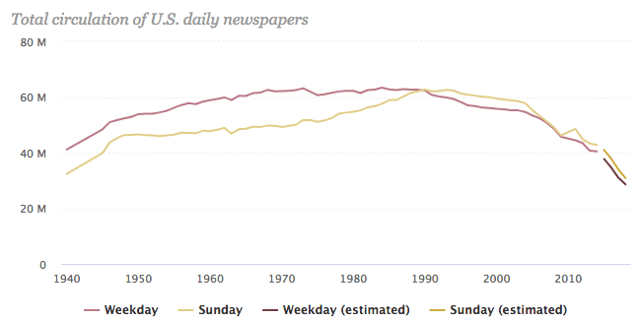 The total circulation of printed newspapers is declining at an accelerating rate. This decline has been a mid-high single-digit rate annually in recent years. The larger scale of Gannett should help buy some time for the company to transition its business to digital revenue streams, but the decline is coming fast.

Secondly, the operational outlook of Gannett is completely reliant on the ability for the company to adequately reduce its costs and to monetize digital products/services. This means that there is a lot of execution risk that investors must stomach. If the company is unable to reach stated cost cutting goals, cash flow suffers, and deleveraging efforts also lag behind. A similar effect happens if digital services are unable to keep pace with printed ad declines.

Deleveraging efforts are particularly important because the company paid a hefty price to fund the merger. The company's $1.792 billion in financing supplied for the merger was issued at an eye-watering 11.5% interest rate. Effective cost cutting will be critical in efforts to shed this high interest debt from the books as quickly as possible.

Despite the slow death of the printed newspaper, Gannett offers interesting upside based on its large dividend that is currently well funded. The company has embarked on a three-year program to cut costs and further transition into digital services. If investors can tolerate the risks that come with a business that is transitioning within a dying business model, there is upside to be had thanks to a market that has set a very low bar for the stock to clear.

Wealth Insights
12.77K Followers
I provide straight forward insights on stocks and markets using fundamental analysis and common sense. - Bachelor's degree in Business Administration with a concentration in Financial Analysis. Been investing and following the markets for more than a decade.- Wealth Insights is an investor, and investment author. His content is not geared to anyone's specific investment goals, time horizons, or risk tolerance. Content is for illustrative purposes only, and is not intended to displace advice from a fee based financial adviser. It is not to be taken as investment advice, or influence investor decision making. Accuracy of data is not guaranteed.