The Bank of Japan has revised the growth forecast for Japan upwards.

The central bank has indicated that rates might rise should growth accelerate.

In this regard, I take a bullish view on the yen.

After a strong run during the first half of 2019, the JPY/USD started to decline in the latter half of the year: 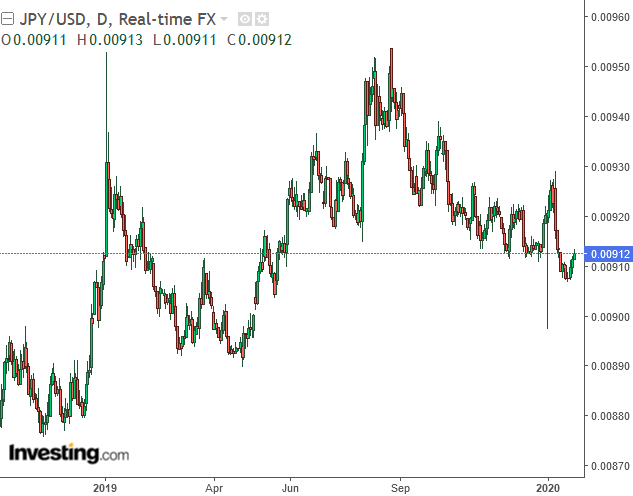 While 2019 was marked by fears that factors such as Brexit and the US-China trade war could lead to a slowdown in global economic activity, this does not appear to have materialized.

For instance, we see that the S&P 500 has continued to ascend, indicating a flourishing appetite for risk among market participants: 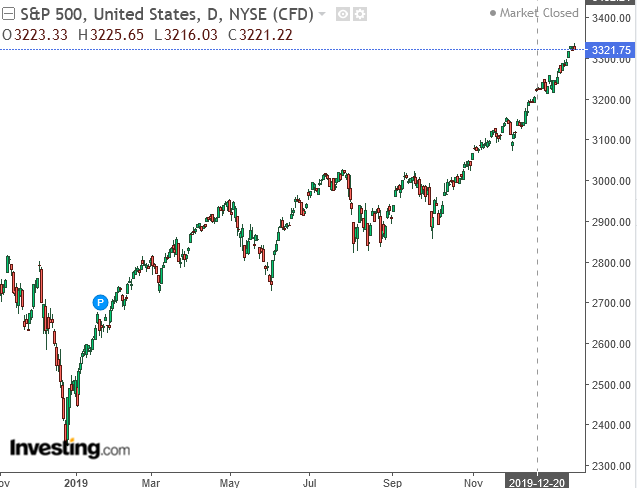 Meanwhile, the US dollar continues to remain strong – dampening the appeal of traditional “risk-off” currencies, of which the yen would be included under this category.

Recently, the Bank of Japan itself has decided to keep rates unchanged – as anticipated by the market. There is a general acceptance that rates in Japan have gone as low as they can go – and there would be no further gains to growth by implementing further quantitative easing.

Moreover, the BOJ has indicated that the government stimulus package is having positive effects on domestic growth – with the projection starting April 2020 up to 0.9% from 0.7%. While the central bank has no plans to raise rates for the near-term, a revision could be in order should growth rise further.

The yen is a currency that is largely based on risk sentiment – domestic growth plays a smaller role in the yen’s movements.

With that being said – an investor would rather hold on to a safe currency than a risky currency – assuming the rate on each was equal. This is why interest rates in emerging markets are higher – the central bank needs to entice investors to hold a riskier currency in exchange for a higher rate of return.

In this regard, the Bank of Japan’s growth assessment is significant in that rates could rise if the current trajectory continues. This would make the yen quite attractive relative to other currencies, in that investors can earn a higher rate while being ensured of safety. Under this scenario, I would foresee that the greenback would lose significant strength.

To conclude, risk appetite might be increasing, but that is not to say that yen demand is decreasing. The overall trend since 2019 is to the upside, and we could see renewed upside from here in light of the higher growth forecast.