A few weeks ago, I published this article covering Union Pacific's (NYSE:UNP) bull case from a dividend investor's point of view. The main driver of growth has been and still is the economy. Hence, as a result of the ongoing growth slowing cycle, the company just reported its first quarterly earnings decline of the cycle. Nonetheless, earnings came in as expected and management expects shipments to pick up in 2020. In addition to the ongoing focus on operating efficiencies, I expect Union Pacific will continue to do well if the economy provides some support going forward.

Q4 Was Bad - As Expected

I have used the graph below in several articles as it shows the core of Union Pacific's business very clearly. Shipments have done tremendously well before 2019, providing the company with the opportunity to boost earnings. This changed in 2019 as the US economy peaked at the end of 2018. Shipments growth quickly turned negative and contraction acceleration started. According to the graph below, the average growth rate of carloads and intermodal was -11% in the fourth quarter. That's exactly what Union Pacific reported as well. 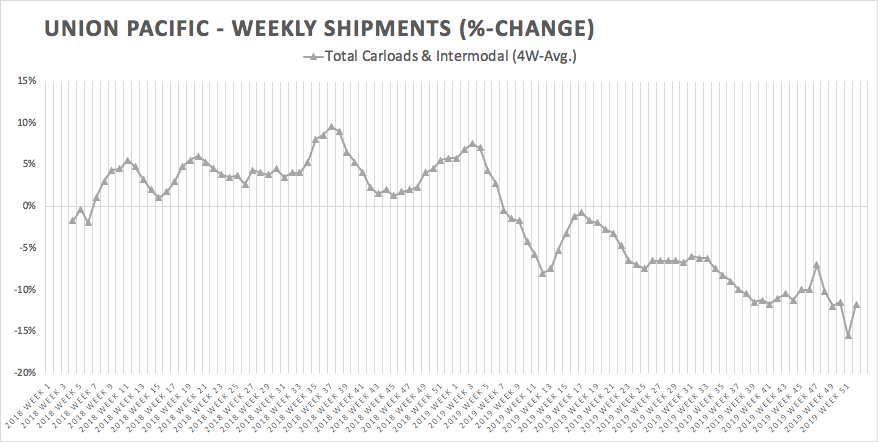 The strongest segment in the fourth quarter was industrial, which saw flat shipments. The industrial segment benefited from 5% higher construction shipments as housing construction started to pick up momentum in the second half of 2019. Plastics were up 2% while forest products were down 8%.

The energy segment saw the largest decline as volumes were down 20%. Frac sand fell by 53% to 18.3 thousand carloads while coal continued its weakness as well, ending the quarter down 25%. Petroleum, LPG, and renewables were up 19%.

Premium was the second-worst segment with the volume being down 15%. Domestic shipments declined by 8%. International intermodal even declined by 23% while finished vehicles declined by 13%. Tariffs and trade uncertainty, as well as declining auto production, damaged this segment.

When adding a 2.5% tailwind from price/mix and a 1% decline in fuel surcharges, 11% volume contraction turns into 10% lower freight revenue. 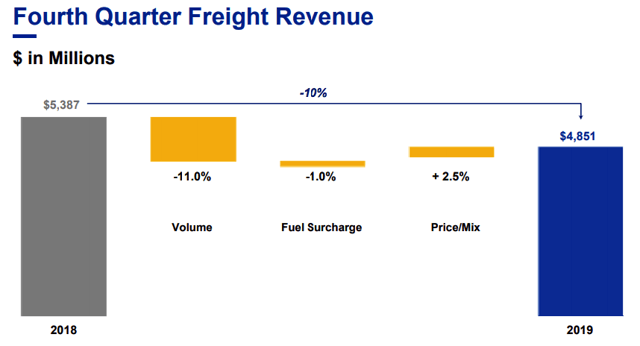 It's a good thing Union Pacific continued to improve its operational efficiencies as operating income declined by 'only' 5%. This is the result of 12% lower operating expenses. The fourth-quarter operating ratio fell from 61.6% in Q4 of 2018 to currently 59.7%. The Unified Plan 2020 as discussed in my previous article continues to improve operations across the board. For example, freight car velocity increased by 5% to 220 daily miles per car. Freight car terminal dwell fell by 13% to 23.3 hours from 26.9 hours in the prior-year quarter. Total train speed increased by 1% to 26.2 miles per hour. Workforce productivity added 4% to 874 daily car miles per full-time employee. Total system train length is up 16% since the end of 2018 and saw further improvements in the fourth quarter as Union Pacific further enhanced operations like the reduction of operations at Armourdale Yard in Kansas City. All of this has resulted in total compensation and benefits being down 18% year-on-year. Purchased services and materials declined by 9%. Costs from equipment and other rents were down 14%.

Fourth-quarter diluted EPS fell to $2.02. That's pretty much in line with expectations of $2.03 and 5% lower compared to the prior-year quarter. The number one reason that caused the company to turn 10% net income contraction into only 5% lower earnings per share. The reason is a reduction of 5% in the number of shares outstanding. In 2019, Union Pacific bought back shares worth $5.8 billion and paid dividends worth $2.6 billion. When combining both, the company returned cash worth $8.4 billion to investors. That's down from $10.5 billion in 2018 (caused by lower repurchases) and $200 million below total cash from operations.

I have used the graph below in a number of articles. The graph shows the current and future regional business expectations. While both started to gain downside momentum in 2018, we start to see that future business expectations are showing three consecutive months of higher results. I expect this trend to continue in 2020 and support the economy similar to the economic trends we saw in 2012 and 2016. 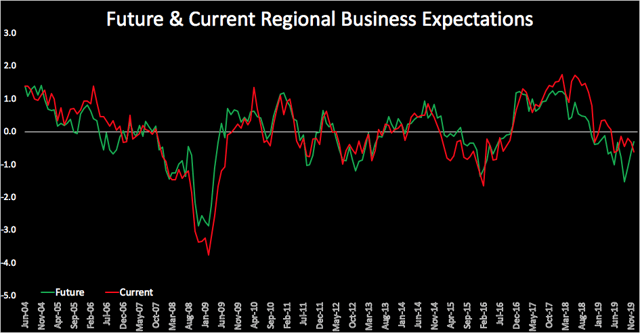 The graph above and the commentary are my expectations. The overview below shows Union Pacific's expectations. I think we have a similar view as management is expecting volumes to improve again. Moreover, pricing gains are expected to offset inflation. The operating ratio is expected to remain below 60% at the end of 2020. While it is impossible for me to assess how likely a sub-60% operating ratio is, I think expectations of slightly higher shipments are very realistic. 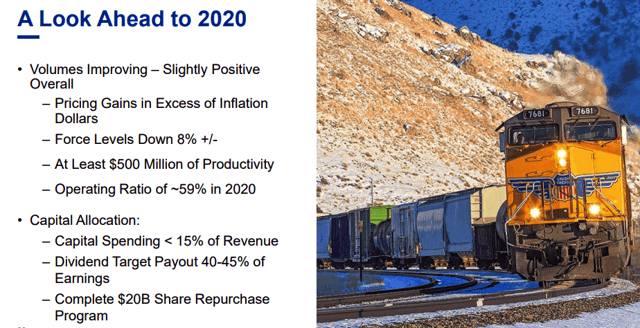 Note that this outlook includes uncertainty regarding domestic intermodal as well as economic and trade developments. Union Pacific also expects further weakness in auto sales and lower coal and frac sand shipments. Biofuels, food and beverage products, as well as plastics, construction materials, and petroleum products, are expected to do well.

If the company is indeed able to grow its shipments, I think we might be in for a similar scenario like the one we witnessed in 2016. Back then, economic growth rebounded after shipments were incredibly weak due to a weak global economy. In 2016, this was mainly the result of a strong dollar and crashing commodities. Current weakness is mainly caused by reduced capital expenditures due to trade uncertainty. 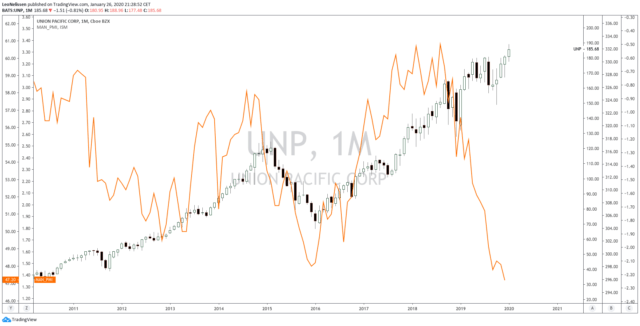 Moreover, if the growth bottom is for real, I expect the stock to move at least 20% over the next 12 months to at least $220 per share. This would also mean that the current valuation of 22.1x earnings will be supported by higher earnings. So far, the most recent rally has only resulted in a higher valuation as fundamentals did not back the move higher.

Unfortunately, this also means the stock is likely to go sideways for an extended period of time if growth is unable to recover. I do not expect investors to give the stock a higher valuation after the market has been pricing in higher economic growth for more than 12 months.

Union Pacific did well. Earnings were down for the first time since the economic recovery of 2016 but management continued to be positive going forward. Higher sales, better pricing, and lower costs are expected to further boost earnings.

The stock liked the news and is currently up slightly more than 2% while I am writing this. If the economy is indeed able to bottom, I have no doubt the current uptrend is able to continue. On the flip side, the stock is currently prone to very high expectations as investors (in general) have started to price in higher growth in the first quarter of 2019. If it turns out that economic growth is unable to recover, I expect investors to lower their expectations resulting in an extended sideways trend of cyclical stocks.

Anyhow, as I currently believe that growth fears should be contained, Union Pacific continues to be a great stock for both traders and investors. The only problem I have is that expectations are high. We desperately need a growth bottom in order to keep this rally going and to further support the company's own growth measures.

Leo Nelissen
18.33K Followers
I'm a Buy-Side Macro Expert/Financial Markets Analyst. On Seeking Alpha, I discuss a wide range of topics including long-term dividend (growth) investments, mid-term trading opportunities, commodities, rates, and related. A big part of my philosophy is to incorporate as much macro as possible in my articles as it helps investors to make their own decisions and to be on top of all major developments. My DMs are always open. Also, I'm on Twitter (@Growth_Value_) in case you want to say hi! Long-Term Dividend HoldingsPSA, DUK, HD, PEP, RTX, UNP, VLO, DE, ABBV, CAT, HBAN, NSC, LHX, XOM, HII, XEL, CVX, CP, LMT, NOC, CME, DHR, EXR