Investors continue discovering and buying NextEra Energy (NYSE:NEE). The stock is trading near a new 52-week top after a stock price rise of 40% in less than a year, despite a low-for-a-utility dividend yield of 1.9%.

With very low natural gas generation fuel costs, strong Florida state growth for its two utilities, and growing demand for its clean energy generation capacity, the company is well-positioned for the future. At a market capitalization of $130 billion and a beta of 0.16, NextEra Energy is less volatile than the overall stock market - a plus for investors seeking stability.

*$700 million less of interest expense and

*a giant one-time $3.9 billion gain in 2018 on disposal of investments primarily from the deconsolidation of NextEra Energy Partners.

2019 was the first full year of NextEra Energy’s ownership of Gulf Power. Gulf Power contributed about 5% of operating income. 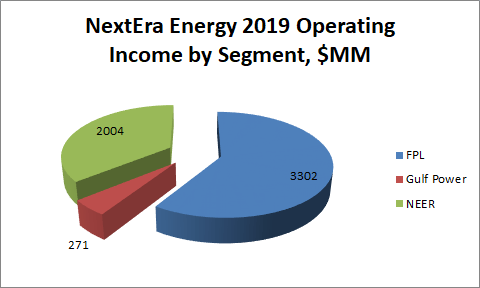 NextEra Energy's results are strong and are expected to continue to be so for at least three reasons:

Although regulated utilities each have their own territories, and so, don’t compete directly, it's worth noting Exelon (EXC) also has considerable nuclear generating capacity as well as renewable energy capacity.

NextEra's utilities have no exact competitors - utilities are given a monopoly on their service areas in exchange for heavy regulation - but it can be compared to companies in the 15-stock Dow Jones Utility Index (DJU).

Year-to-year differences in electricity use, particularly in the commercial and residential sectors, are driven by weather, especially the number of heating degree days in the summer.

Fuels used to generate electricity have changed from baseline coal, once 40%, toward natural gas and non-hydro renewables, as the graphs show. 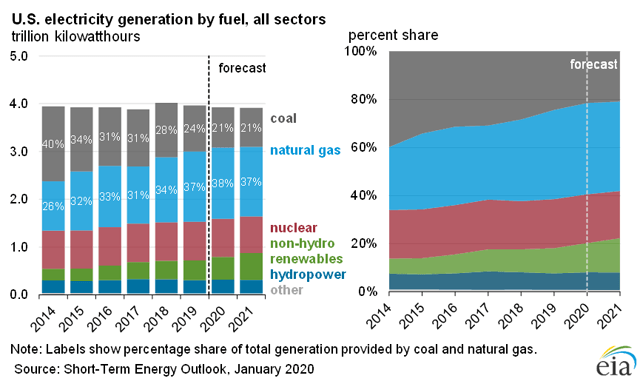 Natural gas is especially prominent in Florida - an advantage for NextEra, because natural gas has become even cheaper. 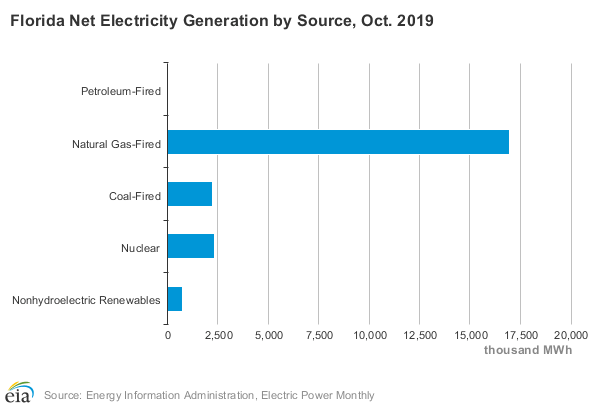 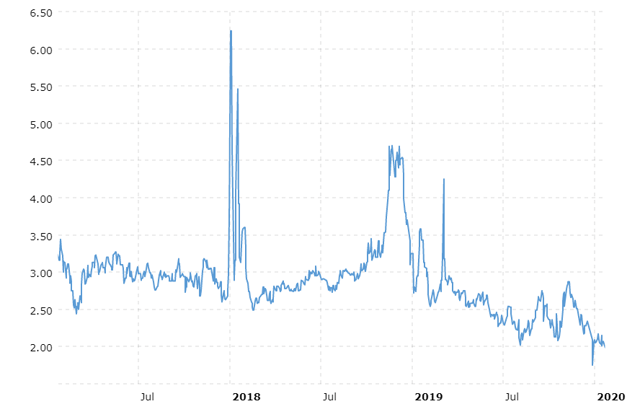 A small element of potential growth is that in July 2019, NextEra completed the acquisition of Trans Bay Cable. This is a 53-mile, high-voltage direct current underwater transmission cable running from Pittsburg, California to San Francisco, California. The cable can supply more than 40% of the electrical power used in San Francisco, important infrastructure in the face of 2019 scheduled blackouts over fears of above-ground transmission lines sparking fires.

NextEra Energy is a holding company that grew from a utility founded in 1925. Today, it has a market capitalization of $129.9 billion and an enterprise value (EV) of $177 billion. Headquartered in Juno Beach, Florida, the company employs 14,300 people full-time.

*NEER has 23,856 megawatts of generation capability.

FPL operates wholly within Florida. Assuming all of the units that are gas, gas/oil, or gas/oil peaking are preferentially fueled by (cheaper) gas, natural gas represents 75% of capacity. Of the remainder, coal is about 3% of FPL's generation capacity, nuclear is 13%, and solar is 9%.

The U.S. has a huge resource supply of natural gas, resulting in low, steady long-term prices. In particular, natural gas co-produced with oil from North Dakota and Texas has garnered low to even negative prices. Like other gas-fired utilities, FPL can essentially - via its capital investment in generation - arbitrage between the low price of natural gas and the competitive, but higher, price of electricity. In 2019, from FPL's operating revenue of $12.2 billion, it paid only $3.26 billion for fuel and $1.52 billion for operations and maintenance. 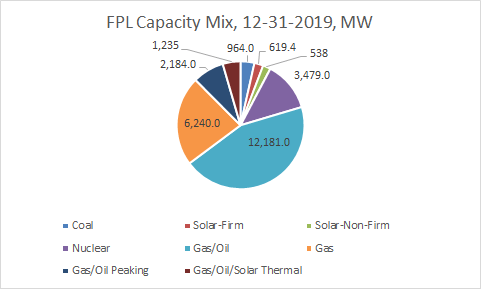 In keeping with this advantage, FPL customer bills are 30% below the national average.

Gulf Power’s much smaller level of generation capacity at 2301 megawatts is fueled 29% by natural gas and virtually all of the rest by coal.

Outside of Florida, NextEra Energy Resources owns many nuclear and renewable generation units. This is a considerable growth advantage, according to the company’s fourth-quarter presentation and report, due to “the best renewables development environment in our history, adding more than 5800 megawatts to contracted renewables backlog and commissioning another 2700 megawatts of wind and solar projects.”

Notably, 15 states (but not Florida) plus Washington D.C. and Puerto Rico have official targets to get at least 50% of their electricity from clean sources by dates ranging from 2030 to 2050. Taken together, these states make up 28% of total U.S. electricity demand. Clean electricity is typically defined as fueled by nuclear, solar or wind: disagreement continues as to whether hydropower also goes in the clean source category. 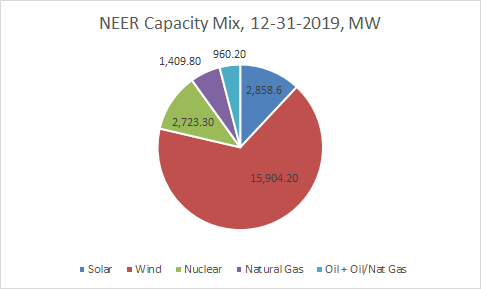 In rate cases, NextEra answers to input from a wide variety of customer-stakeholders.

Insiders own a negligible 0.16% of stock.

In January 2020, the company was named to Fortune’s 2020 list of the “World’s Most Admired Companies” and again ranked first in the electric and gas utilities industry.

NextEra’s trailing price-to-earnings ratio is a very steep 34 at last year’s earnings per share (EPS) of $7.76. The company expects continued compound annual growth rate in adjusted earnings per share (a non-GAAP measure) of 6-8% through 2021 plus an additional $0.15/share from its Florida acquisitions, notably Gulf Power.

The company’s ratio of EV-to-EBITDA is 17.8, well above the preferred ratio of 10 or less, suggesting the stock is not discounted.

NextEra’s dividend is $5.00/share, so its current dividend yield is 1.9%. The company has said it plans to increase dividends again; last year, the increase was announced in February.

The company has an average analyst rating from fifteen analysts of 1.8, or “Buy” leaning toward “Strong Buy.”

Notes on Valuation and Beta

The company’s market value per share is three and a half times its book value of $75.37/share, indicating very positive market sentiment.

NextEra’s beta is an attractive, hyper-stable 0.16: its stock moves directionally with the overall market, but to a far smaller extent (less volatility). This is characteristic of utility stocks.

Other risks, both positive and negative, include natural gas prices, continued growth in electricity sales, asset reliability, changes in regulation in other states away from requiring clean energy, and wind resources.

Despite its price at yet another 52-week high and a 40% stock price increase in less than a year, I recommend NextEra to investors interested in its position as the country’s largest clean power generator that also has healthy, growing, consumer-friendly (less expensive) utility retail operations in the attractive Florida market. 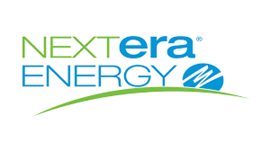 I hope you enjoyed this piece. I run a Marketplace service, Econ-Based Energy Investing, featuring my best ideas from the energy space, a group of over 400 public companies. Each month I offer:

*3 different portfolios for your consideration, summarized in 2 articles, with portfolio tables available 24/7 to subscribers;

*3 public SA articles, for a total of 8 energy-related articles monthly;

*my experience from decades in the industry.

Disclosure: I am/we are long NEE, D, SRE. I wrote this article myself, and it expresses my own opinions. I am not receiving compensation for it (other than from Seeking Alpha). I have no business relationship with any company whose stock is mentioned in this article.