A week dominated by headlines of a spreading respiratory virus has had investors recalling pandemics past, from SARS in 2003 to the Ebola scare six years ago. While the "Wuhan" virus, or known scientifically as "nCoV," is still in its infancy, it is closely tracking both the infection and, unfortunately, death rates of the SARS virus. 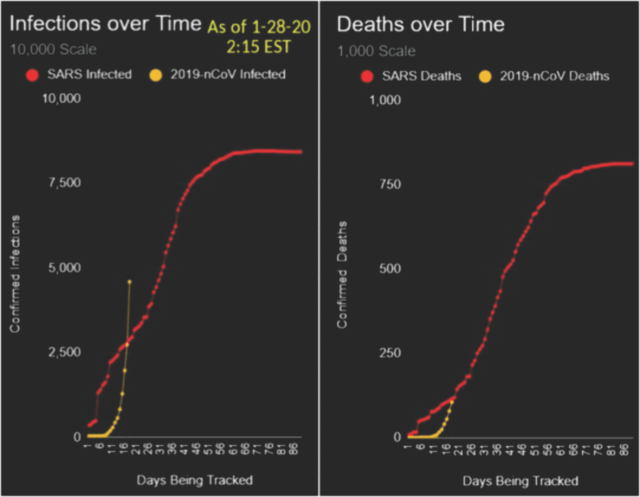 However, the question everyone wants an answer to is: "what does the virus mean for the markets?"

Will it derail the longest bull market in U.S. history? Or, is it nothing to worry about?

If you read the mainstream media, the answer seems to be the latter. To wit:

"However, gauged by the market's performance during the onset of other infectious diseases, including SARS, or severe acute respiratory syndrome, Ebola and avian flu, Wall Street investors may have little to fear that this disease will sicken a U.S. stock market that finished 2019 with the best annual return in years and has kicked off 2020 at or near all-time highs." - MarketWatch

With the stock market perched near all-time highs, it is understandable investors are quick to dismiss the potential ramifications of the virus very quickly. There is also plenty of anecdotal evidence to support the bullish claims as well. The chart below is the S&P 500 index versus its exponential growth trend with a history of the more important viral outbreaks notated. 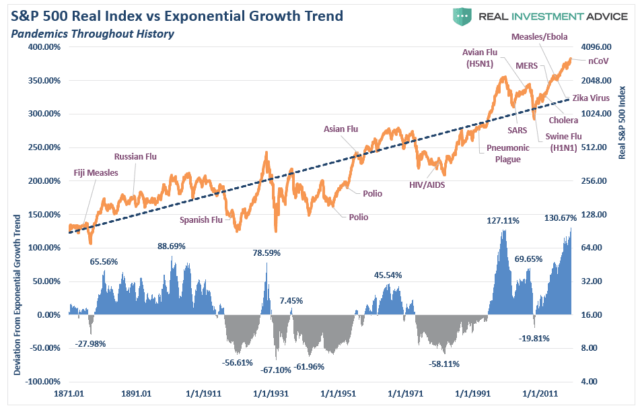 Throughout history, markets have always seemed to bounce back from deadly viral outbreaks. However, long-term charts tend to obfuscate the damage done to investors who have a much shorter investment time horizon.

Currently, the more prominent comparison is how the market performed following the "SARS" outbreak in 2003, as it also was a member of the "coronavirus" family.

Clearly, if you just remained invested, there was a quick recovery from the market impact, and the bull market resumed.

At least it seems that way. 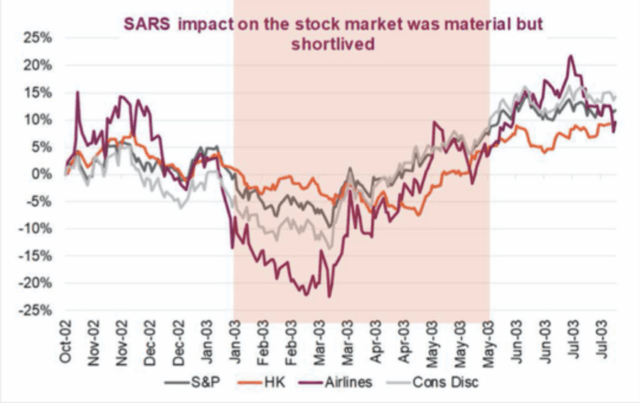 While the chart is not intentionally deceiving, it hides a very important fact about the market decline and the potential impact of the SARS virus. Let's expand the time frame of the chart to get a better understanding. 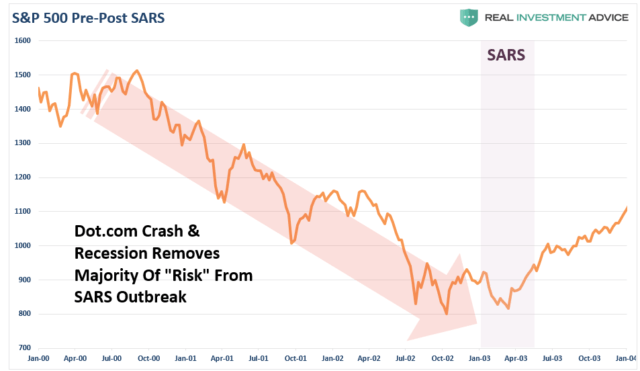 Following a nearly 50% decline in asset prices, a mean-reversion in valuations, and an economic recession ending, the impact of the SARS virus was negligible given the bulk of the "risk" was already removed from asset prices and economic growth.

Today's economic environment could not be more opposed.

Currently, asset prices are near historic highs along with investor sentiment and overall market optimism. The chart below is our composite "fear/greed" gauge, which is comprised of professional and retail asset allocations to equities. (Importantly, this is NOT a measure of how investors "feel" about the market, it is how they are allocated to it.) 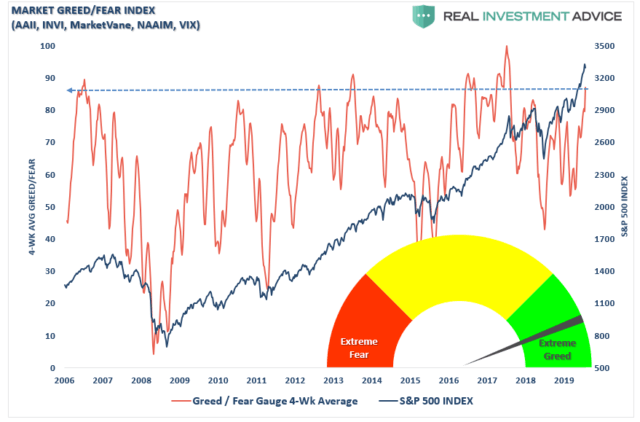 There is also the issue that China, which is ground zero for the "Wuhan virus," is a substantially larger portion, and economically more important, than it was in 2003. 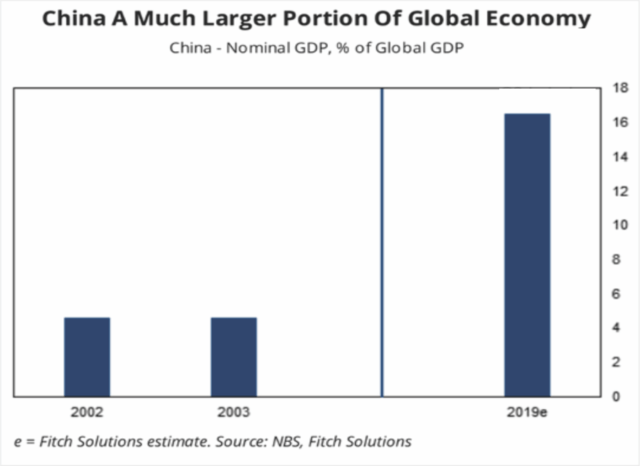 This is an important point recently noted by Johnson & Palmer of Foreign Policy:

"China itself is a much more crucial player in the global economy than it was at the time of SARS, or severe acute respiratory syndrome, in 2003. It occupies a central place in many supply chains used by other manufacturing countries-including pharmaceuticals, with China home to 13 percent of facilities that make ingredients for U.S. drugs-and is a voracious buyer of raw materials and other commodities, including oil, natural gas, and soybeans. That means that any economic hiccups for China this year-coming on the heels of its worst economic performance in 30 years-will have a bigger impact on the rest of the world than during past crises.

That is particularly true given the epicenter of the outbreak: Wuhan, which is now under effective quarantine, is a riverine and rail transportation hub that is a key node in shipping bulky commodities between China's coast and its interior.

Given that U.S. exporters have already been under pressure from the impact of the "trade war," the current outbreak could lead to further deterioration of exports to China. This is not inconsequential as exports make up about 40% of corporate profits in the U.S. With economic growth already struggling to maintain 2% growth currently, the virus could shave another 1% off that number.

As I noted this past weekend, the commodity complex is suggesting something went awry with the economy in January.

"There are a few indicators which, by their very nature, should be signaling a surge in economic activity if there was indeed going to be one. Copper, energy prices, commodities in general, and the Baltic Dry index, should all be rising if economic activity is indeed beginning to recover.

Not surprisingly, as the "trade deal" was agreed to, we DID see a pickup in commodity prices, which was reflected in the stronger economic reports as of late. However, while the media is crowing that "reflation is on the horizon," the commodity complex is suggesting that whatever bump there was from the "trade deal," is now over."

Importantly, this decline happened BEFORE the "Wuhan virus" which suggests the virus will only worsen the potential impact.

Furthermore, given the "ink is barely dry" on the newly signed trade deal, any economic slowdown would likely make it very difficult for China to meet its overly ambitious purchase targets. However, the collapse of soybean prices in January already suggests they aren't purchasing any great amounts.

Though stock markets recovered their stride following Monday's rout, the risks of a deeper market correction remain. For investors, markets both domestically and globally are trading at historically high valuations. However, valuations aren't a problem, until they are. As Michael Lebowitz recently penned:

"Consider that in 1929 valuations were similar to where levels stand today across a wide variety of metrics. Many valuation-based forecasts predict returns of plus or minus a few percent annualized over the next ten years. The following table contrasts current valuations versus prior periods." 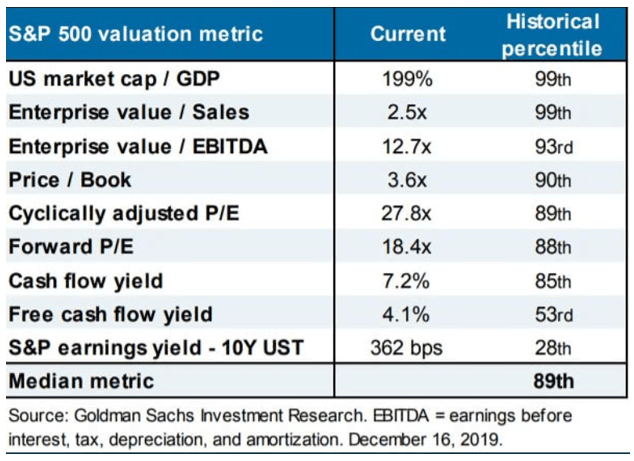 While investors try rationalize high valuations using a number of faulty comparisons, such as forward-operating earnings, low-interest rates, or low-inflation, there is little historical evidence to support that high-valuations are justified by such measures.

However, as David Lafferty recently noted in a Bloomberg interview:

"The thing that worries me is that there's so much optimism priced in, and people are worried about valuation. But valuation, in and of itself, isn't a catalyst. So in that vacuum, people tend to look for catalysts and maybe some type of epidemic or pandemic becomes the excuse they've been looking for to either profit-take or sell down assets that they think are expensive. "

The problem with a more significant market correction, spawned by a repricing of valuations due to slower economic growth, is that it creates a downward spiral.

"A big market correction would severely impact global growth this year, the International Monetary Fund and ratings agencies have warned. The hit to U.S. consumers alone would likely dampen spending and could halve GDP growth, bringing U.S. growth to levels last seen during the financial crisis a decade ago. And companies already burdened with a record level of high-yield debt would be even more exposed after a market downturn, creating the possibility of a wave of defaults that could further undermine confidence." - Johnson & Palmer via Foreign Policy

While it certainly is not clear how much worse the outbreak will become, or how long it will last, the epidemic could last well into the summer. While a short-term disruption during the Lunar New Year holiday is one thing; half a year of interrupted trade and canceled travel in at least swathes of the world's second-biggest economy is potentially much more damaging.

With the economic expansion peaking, the market overly extended and excessively bullish, and fundamentals strained, there is a vast difference between "now" and "then." It also just might be the message that plunging commodity prices and falling bond yields are already sending.

Follow
211 Comments
To ensure this doesn’t happen in the future, please enable Javascript and cookies in your browser.
Is this happening to you frequently? Please report it on our feedback forum.
If you have an ad-blocker enabled you may be blocked from proceeding. Please disable your ad-blocker and refresh.