With major equity markets pulling back from all-time highs once again, there is a temptation to think that the Coronavirus sell-off is the start of a new trend and a bear market is about to unfold. Permabears have been thinking this for the last decade, but we have to remember that the bear market is behind us and we are in the midst of a long-term bull market in stocks.

Boom and busts occur much more frequently than many imagine, and by studying historic stock market cycles, we can learn a lot about their expected duration and also what to expect along the way.

In the late 1800s/early 1900s, businessmen and scientists such as Joseph Kitchin, William Stanley Jevons, John Mills, Clement Juglar, and Nikolai Kondratieff, to name a few, started to formulate theories about recurring business cycles of various lengths and established the concept of the business cycle.

A cycle doesn't mean that the same exact thing will happen over and over again, a cycle is a sequence of events that repeat over time. The outcome won't necessarily be the same each time, but the underlying characteristics are the same. A good example is a seasonal cycle. Each year we have spring, summer, autumn and winter, and after winter, we have spring again. But the weather can, and does, vary a great deal from one year to another. And so it is with the stock market.

General interest in cycles wanes during the boom times ("who cares I am making money") only to resurface during prolonged corrections, as economists and investors seek to understand why the usual short sharp recession has not been followed by a recovery. This was true in the 1930s and is the case once again.

In the 1930s, economists Joseph Schumpeter and Simon Kuznet did much to progress the concepts of cycles in innovation and economic development. In his book Business Cycles: A Theoretical, Historical and Statistical Analysis of the Capitalist Process, Schumpeter suggests a model in which the four main cycles (Juglar, Kitchin, Kuznets, and Kondratieff) are multiples of each other and can be added together to form a composite cycle.

But there is no rational justification that the writer can see for assuming that the integral number of Kitchins in a Jugular or of Juglars in a Kondratieff should always be the same. Yet from the study of our time series we derive a rough impression that this is so. Barring very few cases in which difficulties arise, it is possible to count off, historically as well as statistically, six Juglars to a Kondratieff and three Kitchins to a Juglar-not as an average but in every individual case."

Source: Joseph A. Schumpeter, Business Cycles: A Theoretical, Historical and Statistical Analysis of the Capitalist Process 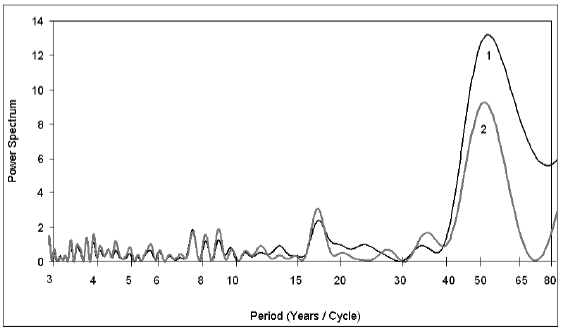 We can see that there is good evidence for regular business cycles of fixed durations but how does this apply to the stock market? JM Hurst was a former NASA engineer who used frequency analysis to identify stock market cycles. The longer term cycles that Hurst identified were 18 years, 9 years, 4.5 years and 3 years, these are described in his book The Profit Magic of Stock Transaction Timing. Hurst set out a number of principles of cycle theory and also believed that the larger cycles are multiples of the small cycles.

Well-known investors such as Warren Buffet and Jim Rogers have both written about 17/18-year stock market cycles and numerous analysts have constructed charts showing 18-year bull and bear market cycles. Cycles of approximately 18 years have been documented by many stock market commentators. 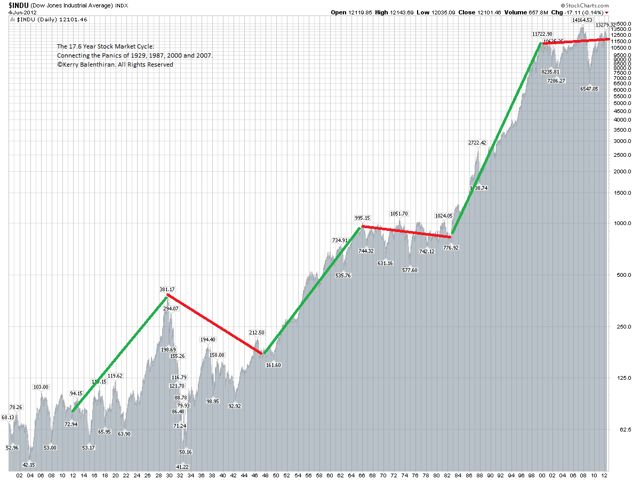 My own research, without knowing about Art Cashin and Steven Williams, also identified the existence of a 17.6-year stock market cycle. When I read about Cashin and Williams I found it incredible that three people could independently identify such a specific cycle. However, I have gone a step further, crucially I have discovered a regular 17.6-year stock market cycle consisting of increments of 2.2 years that correspond to major cyclical stock market turning points such as 1929, 1987, 2000 and 2007 and beyond. I have called this cycle, rather modestly (and, after all, it has to be called something), the Balenthiran Cycle. 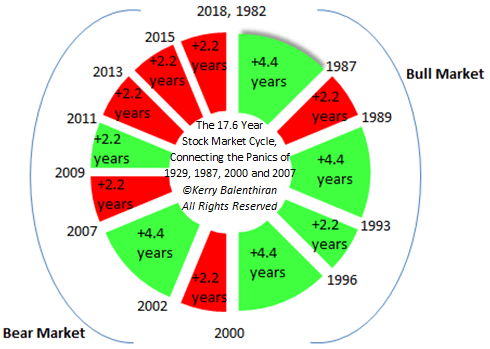 The diagram above shows how the Balenthiran Cycle looks for the bull market from 1982 to 2000 and the current bear market from 2000 to 2018. In general, cyclical bull markets last 4.4 years and cyclical bear markets last 2.2 years. By studying stock market data going back 100 years I have demonstrated that this cycle works from 1929 to 1947, 1947 to 1965 and 1965 to 1982. I have then been able to extrapolate the cycle forwards to provide a market roadmap stretching out to 2053, which outlines the changing character of the stock market through the different phases of the 17.6 year stock market cycle.

As major worldwide stock markets hover around multi-year highs and the media is full of articles stating that Coronavirus threatens the global economy, it is worth remembering that, as we are all aware, stock markets do not go up in a straight line and that 10% corrections are a normal annual event. Investors need to stay the course during a secular bull market and that is easier said than done. By being aware of long-term secular cycles as well as the intermediate cyclical turning points investors will be better equipped to ensure that they have the right strategy for the prevailing stock market conditions.

The table below outlines the roadmap going forward as well as backward. I have shown how this cycle works in my book The 17.6 Years Stock Market Cycle: Connecting the Panics of 1929, 1987, 200 and 2007 which was published in 2013. But I encourage you to look at the chart and check the dates yourself. 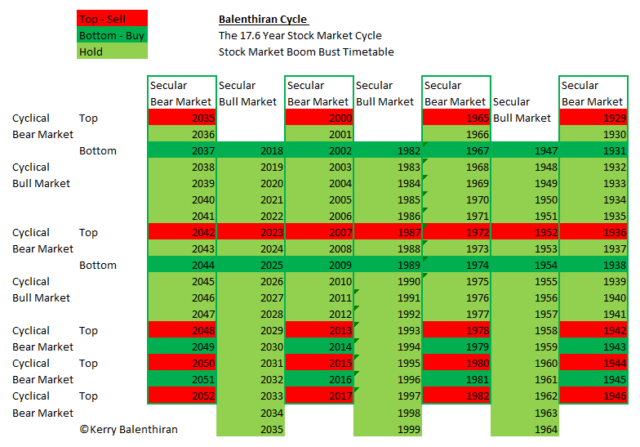 You can see from the relative performance of the different bull and bear cycles in the chart below that there is a significant difference in inflation adjusted gains between historic secular bull and bear markets. We can learn a lot from historical cycles and forewarned is forearmed. 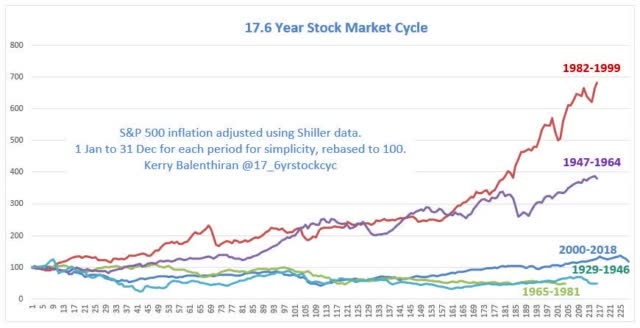 Kerry Balenthiran
188 Followers
Kerry Balenthiran (@17_6yrstockcyc) studied mathematics at the University of Warwick and then worked as a Spacecraft Operations Engineer in the UK and at the European Space Agency. He qualified as a chartered accountant with Arthur Andersen and now works as a consultant within financial services. His mathematical background led to a fascination with the cyclical nature of stock market booms and busts. Kerry Balenthiran's first book "The 17.6 Year Stock Market Cycle, Connecting the Panics of 1929, 1987, 2000 and 2007" is out on 25th February 2013.
Follow