If investors are looking to invest in a biotech that can create a possible treatment for the coronavirus, we believe NanoViricides (NYSE:NNVC) is the last stock they should buy in the “coronavirus sector”. NNVC has appreciated over 500% on the coronavirus hype over the past two weeks, as shown below: 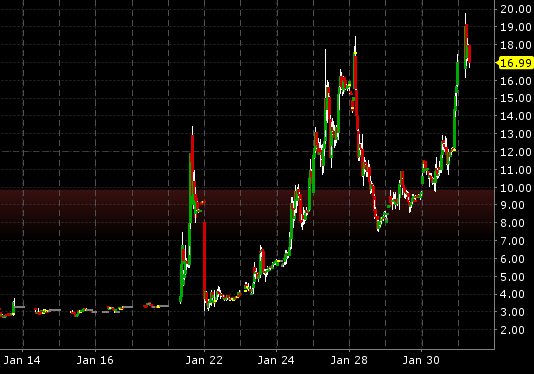 Before the coronavirus news flow started happening, NNVC was effectively a broke, struggling biotech with no positive developments in the near future, negotiating with investors who we speculate didn’t even want to pay $2 a share. We speculate this because we see that NNVC has been filing S-1s, in order to sell shares, since 9/30/19, as shown below:

However, the company didn't raise any funds during that time period until 1/24/20. That tells us that NNVC wasn't able to strike a deal with investors until then. The coronavirus outbreak was a gift for NNVC, as they were able to raise gross proceeds of $8.625M, selling 2.875M shares at $3 per share on 1/24/20.

We believe that soon after the coronavirus news flow starts to slow down, that’s when the NNVC stock will start to decline. And this could happen within the next few days or weeks. We believe it will decline to $3-$5 per share within the next two weeks, and then fall further to sub $1 within a year.

Contributing to the hype, was NNVC’s CEO, Dr. Anil R. Diwan, said in an interview on Fox Business News on 1/28/20, that in the “best case scenario” the company can have a coronavirus treatment within 4-6 weeks. It appears that Fox Business News has since removed the video.

In our opinion, investors shouldn’t believe Dr. Diwan. First, NNVC does not have the funds to spend on R&D, nor manpower, with only 17 employees, to make this possible so quickly, or at all. NNVC has not received any funding from another organization. It would have to spend its own funds developing a coronavirus drug that might be a fruitless exercise, even if successful, if the coronavirus goes away by the time the drug is ready, which is the likely outcome. Second, NNVC has been around since 2005, and has never filed even an IND (Investigational New Drug) application. The company has never done any clinical trials.

On 1/30/20, NNVC published a PR titled “NanoViricides Confirms It Has Been Working On A Treatment For The Novel Wuhan Coronavirus.” Dr. Diwan gives a vague rundown on why he thinks he could have found a potential treatment by stating:

However, the revealing statement is the following:

“Of course, we will need support from governmental and international agencies such as the US CDC, WHO, and Chinese CDC to successfully develop these treatments, and, if developed, to get them to the patients in the fastest possible time… The Company intends to pursue a relevant collaboration for testing of our drug candidates soon.”

Dr. Diwan makes the point above that NNVC would only be able to develop a coronavirus treatment if it receives funding from another organization. However, evidence suggests the company isn’t equipped to develop a treatment for the coronavirus. Over the past 12 years of having mostly the same pipeline, NNVC has never been able to perform a clinical study. Therefore, why would any potential collaborative entity trust and invest in NNVC to successfully engage in prompt clinical studies for a coronavirus treatment?

We tried calling NNVC’s phone number to speak with an investor relations rep. The number is below: 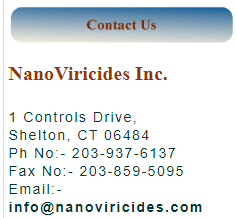 The phone went to a generic voicemail message that didn’t say the name of the company. It also said the mailbox is full so we couldn’t leave a message. We tried calling twice over the past week with the same result. What if a potential collaborator calls the number and gets the impression that the company isn’t even active?

NNVC has shown primarily the same pipeline in every annual report since 2008. 2008 is the furthest back it has published 10-Ks on sec.gov.

The following is NNVC’s pipeline currently shown on its website. None of the drugs are past the IND stage: 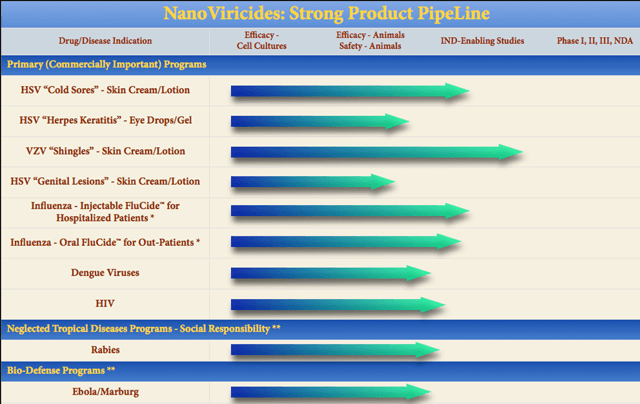 Today, ten years later, NNVC has almost exactly the same pipeline with only a couple additions and has not shown any progress.

When there's a virus scare in the media, NNVC has shortly thereafter released PRs claiming to be creating a treatment. But it has never worked out.

The rapid development and deployment capability of our platform technology was demonstrated by how quickly we were able to create these drug candidates," said Dr. Eugene Seymour, MD, MPH, Chief Executive Officer of the Company, explaining, "The design of a set of viable ligands was completed in merely three weeks, and the initial syntheses took another four weeks.

"We believe that with our 'intelligent nanomachines' approach we have the potential to develop superior therapeutics as compared to other approaches," said Anil R. Diwan, PhD, President of the Company.

One of NNVC’s previous CEOs was Dr. Eugene Seymour. See a video of him from 3/17/16. In this interview, he is playing on the recent Zika virus hype.

"Those mosquitos are everywhere,” said Dr. Seymour. “They are moving up the coast, and are bringing with them Dengue, and soon Zika. And Zika, came out of nowhere…We have a lot of drugs in our pipeline, and we are moving as fast as we can to get these drugs into the regulatory system, one after the other.

In February 2016, WHO declared the Zika outbreak a Public Health Emergency of International Concern (PHEIC). Then in November 2016, WHO announced the end of the Zika epidemic, and NNVC hadn’t even gotten anywhere with its Zika vaccine.

So much for “as fast as we can”. The company is still in the preclinical stage with all of their drugs. They haven't done any tests on humans.

NanoViricides Has Had Two CEO Resignations Over The Past Two Years

He was replaced by Dr. Irach Taraporewala, who then resigned less than a year later on 1/31/19. Then Dr. Diwan, who is also the Chairman of the Board, took Taraporewala’s place as CEO.

Which Biotechs Working On A Coronavirus Vaccine Should You Invest In?

There are many biotechs that have run up from the coronavirus panic. But only a few who seem to actually have a shot at developing a vaccine or treatment. NNVC has no chance in our opinion. We believe the following two biotechs have a chance. Both have received funding from another source, which is a great incentive for a biotech to create a vaccine rather than having to fund the development themselves.

Moderna is a clinical stage biotech, which develops therapeutics and vaccines based on messenger RNA, which includes for the treatment of infectious diseases, like the coronavirus. On 1/23/20, Moderna announced that it has collaborated with the Coalition for Epidemic Preparedness Innovations (CEPI). Under the terms of the agreement, Moderna will manufacture an mRNA vaccine against the coronavirus, which will be fully funded by CEPI.

Inovio focuses on developing DNA-based immunotherapies and vaccines to prevent and treat cancers and infectious diseases. Like Moderna, it also received a grant from CEPI of up to $56M to create a coronavirus vaccine. Inovio also announced on 1/30/20, that it is collaborating with Beijing Advaccine Biotechnology Co. to advance the development of INO-4800, Inovio’s vaccine against the Coronavirus.

Of course, if either one of the above biotechs create a new vaccine or treatment for the coronavirus, by that time the virus may have come and gone, like other viruses have like SARS and Zika, and the creator will not make any revenues from it. If that happens, then it will wait for the virus to return, and they will be able to attack it quickly to prevent it from spreading a second time.

Most of the coronavirus sector buying right now is emotional and momentum based, not so much fundamental. We’re confident the biotech that actually produces an effective vaccine or treatment for the coronavirus will likely jump on that news. Initially for emotional reasons, but also fundamental, maybe not because of a direct return on investment, as the virus might have stopped spreading by then. But rather because the biotech has shown the ability to quickly create a successful treatment for a nasty disease. This demonstrates competence to create other effective drugs in the future.

White Diamond Research
2.48K Followers
We provide deep research and valuable information on small cap stocks to hedge funds and high net worth individuals. We specialize in the technology and healthcare sectors. We have an over 80% success rate, see our reports at whitediamondresearch.com. See the 3rd party verified return on each of our bearish reports over the last 24 months at: https://breakoutpoint.com/as-summary/white-diamond-gvmtg/To inquire about becoming a premium subscriber, send a PM here or email us at research@whitediamondresearch.com.Follow us on twitter @whiteresearch.
Follow

Disclosure: I am/we are short NNVC. I wrote this article myself, and it expresses my own opinions. I am not receiving compensation for it (other than from Seeking Alpha). I have no business relationship with any company whose stock is mentioned in this article.