The Fed is the prime mover of the financial system and as such should be closely watched. Of course, the Fed has to operate in the context of the current financial situation, so it behooves investors to be aware of certain developments. The first part of this article will provide a list of points to bear in mind. Since they have been thoroughly examined by various commentators and constitute a brief recap, it will suffice here simply to list them with an occasional short comment.

The Fed base rate is currently 1.5-1.75%. This is extremely low but higher than the ECB that is at present at -0.5%. The federal debt is up to $23.2 trillion and increasing at a rapid pace. The national debt may well surpass $ 30 trillion even before 2030. The government is spending more than it takes in via taxes. The Fed is providing liquidity to the Treasury currently at about $60 billion a month by purchasing T-bills. The Fed is also financing the repo market and making huge amounts of liquidity available to the big banks. The stock markets are at all-time highs with exceptionally high P/E ratios. Investors should not expect that there is still a lot of room for stock prices to go much higher. Stocks are already very expensive. Stock buybacks have buoyed up the markets as corporations have increased debt to record levels. Stock prices are highly inflated. Inflation figures produced by government agencies have little connection with reality and hide real inflation. Consumers are at peak debt with mortgages, student loans, car loans and credit card debt. The economy is not really doing so well even if GDP growth is reckoned at 1.5-2%. Unemployment figures are extremely low but do not correspond to reality as the percentage of working-age Americans that are employed is about the same as the workforce in 2000. The most recent development that could concern the Fed is the outbreak of the coronavirus, which could bring on a global recession. A lot has already been written on possible effects the coronavirus could have on the global economy. This is a brief summary of the financial situation that the Fed has to deal with. All of this should be clear and known to investors.

There are various outcomes that may result from the present situation as there are various measures that the Fed could implement. One is to turn to outright purchase of stocks and ETFs in case of a market downturn. The SNB and BoJ have shown the way with stock and ETF purchases. The SNB (Swiss National Bank) creates money and buys euros and American stocks among other things. The Fed could follow the example of the SNB and intervene directly in the markets. At the present time, the SNB has about $90 billion of American stocks in its reserves. See the chart below to get an idea of what the Swiss have been doing. 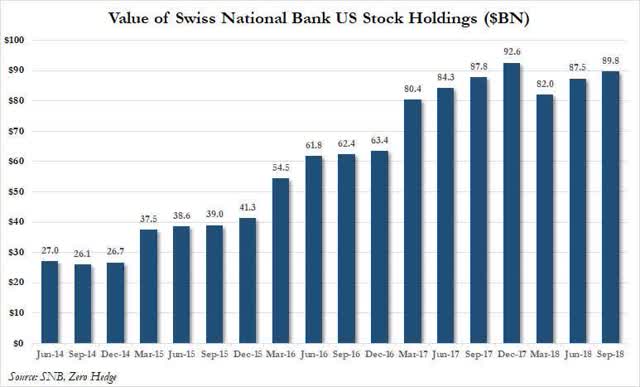 The BoJ has gone to extreme lengths to stabilise markets as can be seen from the charts below. The BoJ has practically eliminated price discovery from the Japanese bond markets and also prices for ETFs are determined by what the central bank purchases. The BoJ has increased its balance to a great extent without the Japanese economy imploding.

So far, the Fed has been buying T-bills to keep the Treasury in funds and supplying liquidity to the repo market. In the event that the Fed starts buying stocks and ETFs, that could cause market distortions. As the Treasury needs money to cover deficit government spending, the Fed will probably continue its monetization of the federal debt, currently at the pace of $60 billion of T-bills monthly as mentioned above.

Given the precedents of the SNB and the BoJ, without even mentioning the QE efforts of the ECB, it seems that the Fed could also monetize a good portion of the national debt without causing undue stress. One real danger is deflation with excessively low interest rates. The EU and Japan have not succeeded in bringing up their inflation rates 2%, and their economies remain sluggish.

At the same time the Fed is financing the repo market with great amounts of money, hundreds of billions of dollars in liquidity is being supplied to the banks. There is really no exit strategy in place even if the Fed declares that the “exceptional” repo financing will end in 2020. That remains to be seen.

Since the Fed is injecting huge amounts of liquidity into the economy, one might reasonably expect that there would be more inflation as opposed to deflation. Of course, BLS statistics are “doctored,” and the real inflation rate for consumers is more like 5-6%. Workers are becoming poorer and poorer as wages have stagnated for years.

In the event of a downturn, it is also the case that the Administration has a Plunge Protection Team (PPT) ready to intervene in the markets should there be any serious developments. Many analysts assume that with the markets so overbought, there could be a correction of 5% in 2020, but that apparently is really nothing to worry about. Just buy the dip. There are very few analysts that see catastrophic market falls of 50%.

Another factor that investors should consider is that about 17% of stock market capital is concentrated in very few stocks, like Alphabet (Google) (GOOG) (GOOGL), Amazon (AMZN), Apple (AAPL), Facebook (FB) and Microsoft (MSFT). If the Administration undertakes anything that could break up the near monopolies that these companies have, that would have repercussions on the markets. This is something that the Fed is certainly aware of but about which not much can be done at the present time. The Fed cannot undertake legislative action to impose anti-trust laws on the internet giants.

Further lowering interest rates in order to align with the other major central banks like the ECB and BoJ is a possibility. The reasoning behind such a move is at the moment somewhat hard to discern as nominal inflation is still below the Fed’s 2% target. The Fed could still lower interest rates from the present 1.5%, and this would further support the equities market. So investors should watch out for any Fed decision to lower rates. Higher interest rates in the US, however, would tend to reinforce the US dollar in forex markets, thus making it more difficult for American manufacturers to compete in international markets. Higher interest rates on the part of the Fed would favour bonds over stocks. The Fed has stimulated the economy by lowering rates and reversing its policy of QT (Quantitative Tightening), namely decreasing its balance. At the same time increasing the basic rate from 1.5-1.75% could cause a liquidity crisis similar to what happened in December 2018. In fact, the Fed reversed its policy so as to save the stock markets from further falls.

If the Fed discontinues its support of the repo market, then the repo interest rate might again soar to 8% as it did in September 2019. It is therefore unlikely that the Fed will make good on its promise to suspend the repo program. The big banks will continue to be short of the reserves required by current regulations. This will make them more vulnerable in the event of a financial crisis. Consequently, the probability of a large scale bailout of the big banks as in 2008 is significantly higher. The Fed will not want a repeat performance of the failure of the Lehman Brothers bank. One may therefore expect an increase in the Fed balance for 2020, something already discounted by various market observers. See the chart below for the increase in the Fed balance.

What all this portends for investors is more market uncertainty. With volatility at low levels, investors become complacent and take on additional risk without hesitation. See the chart below for the volatility index. Synchrony Financial

Corporations continue to go into debt to finance share buyback programs with the result that corporate debt is at extremely high levels. See the chart below.

The message for investors is that they should get out of BBB corporate bonds as soon as possible, and that means now before any liquidity event brings on a corporate debt crisis. The current spread with better investment grade debt is so narrow that better positioning will more than compensate for marginal differences.

Regarding equities, one can assume that the Administration would prod the Fed to intervene in the event of a severe downturn in the stock markets. There is also the consideration that millions of Americans with their 401k accounts have invested heavily in the stock markets and that their pensions would suffer should the stock market tank. The PPT would almost certainly be activated to save the retirement savings of a large segment of the population.

Even though the present recovery is the longest on record and the stock markets have reached record highs without much regard for fundamentals, stock prices are likely to edge even higher as corporations continue to buy back their own shares. So it would seem that being long equities is a reasonable proposition. The real question is to what extent corporations can go into debt to finance share buybacks and whether there will be a liquidity crisis that could endanger the huge stack of debt that has been piled up. If the Fed should raise interest rates to fight inflation, which could trigger a market crash, the Fed would obviously be blamed for raising rates at the wrong time. The Fed could also be expected to intervene in markets should there be a real crisis. Leave it to the Fed to save the situation.

Additional disclosure: Data from third-party sources may have been used in the preparation of this material and WWS Swiss Financial Consulting SA (WWW SFC SA) has not independently verified, validated or audited such data. WWS SFC SA accepts no liability whatsoever for any loss arising from use of this information, and reliance upon the comments, opinions and analyses in the material is at the sole discretion of the user. Please consult your own professional adviser before taking investment decisions.
The comments, opinions and analyses expressed herein are for informational purposes only and should not be considered individual investment advice or recommendations to invest in any security or to adopt any investment strategy. Because market and economic conditions are subject to rapid change, comments, opinions and analyses are rendered as of the date of the posting and may change without notice. The material is not intended as a complete analysis of every material fact regarding any country, region, market, industry, investment or strategy.
All investments involve risk, including possible loss of principal. Stock prices fluctuate, sometimes rapidly and dramatically, due to factors affecting individual companies, particular industries or sectors, or general market conditions. Bond prices generally move in the opposite direction of interest rates. Thus, as prices of bonds in an investment portfolio adjust to a rise in interest rates, the value of the portfolio may decline. Special risks are associated with foreign investing, including currency fluctuations, economic instability and political developments.