FirstEnergy Corp. (NYSE:FE) is a regulated electric utility serving parts of Ohio, Pennsylvania, West Virginia, New Jersey, and Maryland. In addition, it operates one of the largest electricity transmission systems in the East with over 25,000 miles of FERC-regulated lines. Serving about 6 million customers and covering 65,000 square miles of geography, FirstEnergy operates as ten different state-regulated utility brands and four transmission companies. The utility has a trouble history and recently separated its power generation assets, throwing the keys to its creditors in a bankruptcy filing. After a nice run, it’s time to protect capital gains profits by either selling a portion of your shares or by setting a stop loss limit order - or both.

Below is a map from the company's latest investor presentation outlining its various service areas. 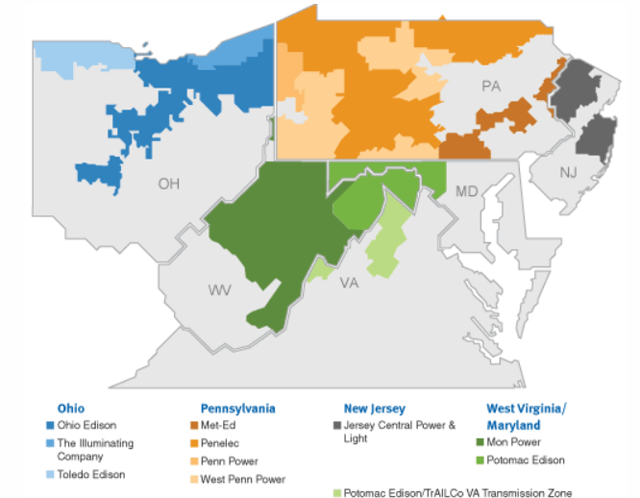 I offered an article on January 23, 2018 titled "Utility FirstEnergy: Time To 'Belly Up To The Bar", one day after management announced their reorganization, which included the separation and bankruptcy filing for its power-generating assets. At the time, shares were trading at $32. The reorganization came with substantial $2.5 billion equity investments by several hedge funds to shore up FE’s finances. The announcement was well-received by the Street, with the share price up 13% the day of the announcement. Since then, FE has generated a 68% total return versus a 14% return for the S&P 500, according to SA’s article calculations.

With the reorganization, FirstEnergy reports as three segments: regulated distribution (the 10 utilities listed above), regulated transmission (four companies) and corporate expenses. For the full year 2019, distribution is expected to earn $2.06 per share, transmission is expected to earn $0.835, and corporate is expected to contribute -$0.515, for a total anticipated EPS of $2.55. Management is forecasting a flat 2020 with midpoint estimates of $2.20, $0.87, and $-0.57, respectively, for a total 2020 EPS of $2.50. Morningstar and others are expecting a 5.4% annual EPS growth rate, which would translate into EPS of $2.93 by 2023.

Reviewing the regulatory environment for the service territories of FirstEnergy could leave investors wanting. S&P’s Regulatory Research Associates maintains the following graphic of rankings of state PUCs. The majority of FE’s distribution income is from Ohio, Pennsylvania and West Virginia. These states are ranked as Average 2 (OH, PA) and Below Average 1 (WV). NJ and MD are minor earning states and are rated Average 3 and Below Average 2, respectively. Overall, the regulatory environment for the company is mediocre, at best. Investors should focus on utilities with better regulatory environments, such as those states listed as Above Average, or at a minimum listed as Average 1. As investors' long-term stock returns are mainly controlled by the allowed ROE, focusing on the 16 states with better regulatory environments should lead to better investment results, and FE operates in none of these states. 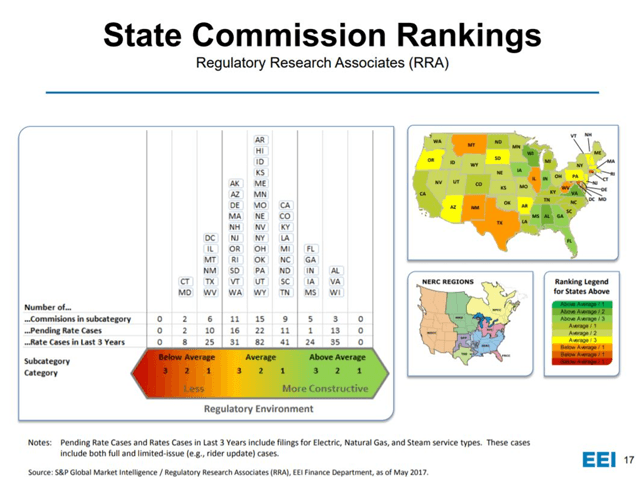 Dividends were stagnant from 2014 to 2018, after being reduced to $1.44 annually to boost corporate cash flow. In 2019, quarterly distributions were raised by $0.02 for a yearly total of $1.52, and were raised again this year by $0.01 for anticipated total 2020 dividend of $1.56. Going forward, investors could expect dividend increases to at least match inflation at 2-3%.

According to 13-F filings, Elliott Management, one of the biggest hedge fund holders and a contributor to the early 2018 capital infusion, sold out of their $1 billion investment in FE during the 3rd quarter of 2019. After buying in at the $28 range for both new common and convertible preferred stock, Elliott took its substantial profits to the bank. Insider Monkey reports the total number of hedge fund owners have declined from a high of 42 funds to a current 32 funds. 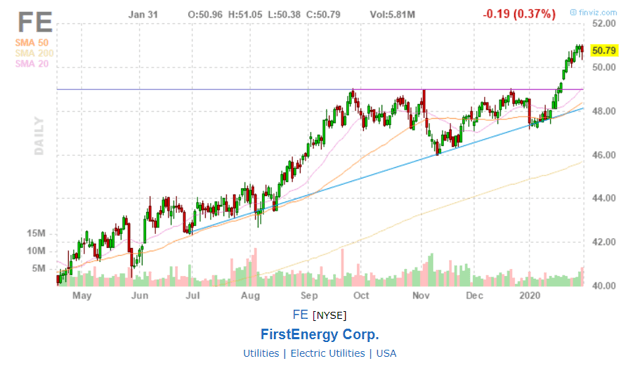 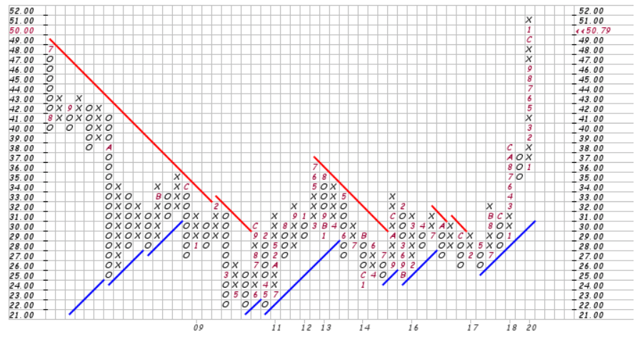 My general feeling is FirstEnergy was a good speculative buy in early 2018, but not so much now. Valuations seem to be in line with most overvalued utilities, with little to get excited about going forward. For those who bought into the turnaround, the current share price strength should provide a nice exit point for at least a portion of the position. While FE has a nice position in its higher-profit transmission business, overall its prospects are no better than the sector as a whole and could be worse than those of some of its peers that operate in better regulatory environments.

I would recommend taking profits here either through an outright sale, following the lead of Elliot Management, or at least putting a stop loss limit order for a portion of your position to protect against a downdraft in utility valuations. (A stop loss limit order is an order placed with your broker to sell a stock when the price crosses a predetermined level on the way down.) I am selling 25% of my current holdings on Monday 2/3 at the market and have put a stop loss limit order in for 45% of my current holdings at a price of $47.90, matching the most recent resistance/support price and the level at which the P&F chart turns negative for the first time since late 2018. I anticipate banking my profit while retaining my original investment in FE shares.

As Grandfather Fisher told me years ago, “You never go broke taking a profit”. Since I don’t plan on exiting the position altogether, I have listed FirstEnergy as “Neutral”.

George Fisher
5.35K Followers
I am the author of Guiding Mast Investments monthly newsletter, focused on timely dividend paying stocks. Our mission at Guiding Mast Investments is to help investors keep a steady pace of wealth accumulation as they navigate through their financial voyage.  I have been a Registered Investment Advisor, financial author, and entrepreneur. I bring a variety of expertise to my clients, from personal investment planning and management to stock market analysis skills. I am the creator of the late 1990s investment newsletter Power Investing with DRIPs focused on timely selections of dividend paying stocks. I have also published two books through McGraw Hill, All About DRIPs and DSPs (2001), and The StreetSmart Guide to Overlooked Stocks (2002). My work experience covers a variety of fields.Prior to being a RIA, I spent 15 years as a corporate manager at Georgia-Pacific Corp before venturing out on my own, operating several businesses from manufacturing to export marketing management. President Ronald Reagan appointed me to the National Advisory Council overseeing the Small Business Administration from 1988 to 1991. Now comes the obligatory disclaimers: The opinions and any recommendations expressed in this commentary are those of the author . None of the information or opinions expressed in this article constitutes a solicitation for the purchase or sale of any security or other instrument. Nothing in this commentary constitutes investment advice and any recommendations that may be contained herein have not been based upon a consideration of the investment objectives, financial situation or particular needs of any specific recipient. Any purchase or sale activity in any securities or other instrument should be based upon your own analysis and conclusions. Past performance is not indicative of future results. The information contained in this report does not purport to be a complete description of the securities market, or developments referred to in this material. The information has been obtained from sources considered to be reliable, but we do not guarantee that the foregoing material is accurate or complete. Any information is not a complete summary or statement of all available data necessary for making an investment decision and does not constitute a recommendation. Expressions of opinion are as of this date and subject to change without notice. Either Mr. Fisher or his employer, if any, may hold or control long or short positions in the securities or instruments mentioned.
Follow

Disclosure: I am/we are long FE. I wrote this article myself, and it expresses my own opinions. I am not receiving compensation for it (other than from Seeking Alpha). I have no business relationship with any company whose stock is mentioned in this article.