This is sectoral, not specific

As we all know, the three things in real estate are location, location and, you guessed, location. So, it's not possible to provide an analysis in general terms such as this, which states that any specific real estate investment is a good idea. It's only possible to argue that the sector as a whole is worthwhile. Which it is.

We have a general shortage of supply in the housing market, yet the home ownership rate is rising. That's feeding through into a general rise in prices.

This can of course get out of hand as it did less than two decades ago. However, price rises - measured properly, by the monthly cost of purchase - are rising at about the rate of real income rises, something which is sustainable.

There is always the possibility that interest rates will change, altering those monthly costs. But other macroeconomic evidence tells us that the Fed is most unlikely to make a move this year. We, therefore, seem to have the right macroeconomic background for investing in residential property.

The most obvious measure of house prices is the Case-Shiller set of indices:

House price appreciation moderately accelerated in November as measured by the S&P CoreLogic Case-Shiller 20-City Composite Index. The not-seasonally adjusted index increased 0.1% and was up 2.6% for November 2018. 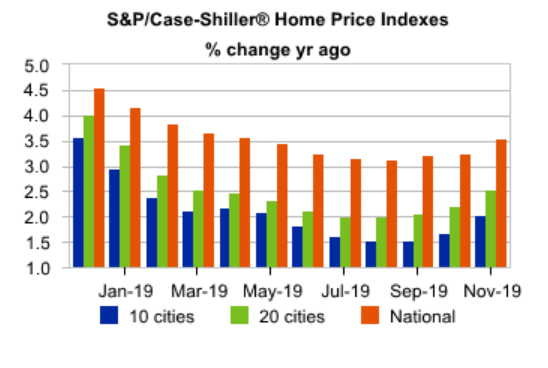 We have price rises, yes. But the important thing to note about the detail is that real incomes are also rising at about this rate. That is, this is a sustainable rise in prices. We're not in the middle of some unsupportable boom that will necessarily reverse.

We have a continuing rise in the homeownership rate:

The vacancy rate is bobbling around moderately too.

People are applying for mortgages, telling us in part that this desire to own a home continues:

We're seeing an increase in new home sales but that's a fraction of the overall turnover of the market. Clearly, an addition of even one house to the national stock reduces the price of all other houses by some fraction of a cent or two. But the inflow of new stock isn't large enough to prevent the value appreciation going on.

The big other number

The price of something is how much it costs to buy - that's one of those D'Oh assertions. But the price of a house, like other durables, isn't the headline number, rather, it's the monthly cost of financing that headline number. This is why a rise in interest rates so damages house prices. So, we'd like to ponder whether we think interest rates are going to change.

As far as we can tell, the Federal Reserve is unlikely to change rates this year. Growth of GDP is at about trend, which is the best that monetary policy can achieve anyway. Unemployment, one half of their target, is at generational lows. The other half of their target, inflation, is rising gently to be within reach of that 2% target. They've even flat out said that barring any great surprises, as long as growth continues, they're not going to change rates.

So, this house price party, it's not exactly a bacchanal, that's true. But it looks sustainable, matching real income rises. Further, we don't expect a change in interest rates which would radically change the monthly financing costs of purchases at current price levels.

I, therefore, think that the steady price appreciation in U.S. housing is sustainable. Which makes it an attractive investment of course. Rental prices are sufficient to cover mortgage financing costs plus maintenance, making the basic idea, cash flat at worst. I don't expect any significant change in mortgage costs. Fixed rate mortgages mean that locked in purchasers don't have to worry about finance costs rising, of course, but a significant rise would still have an effect upon capital values. I don't see that happening in the near future.

Real estate, residential housing, looks therefore to be a good investment on those macroeconomic grounds.

All real estate depends upon location and hyper-local markets, as we know. But those can and will be entirely swamped by major movements in macroeconomic circumstances. Our look at those macro factors tells us that, barring extreme moves in other parts of the economy, the background here is going to be stable.

Real incomes are rising at a rate which makes the current house price appreciation sustainable. There's nothing which leads us to expect a significant change in interest rates and therefore financing costs - thus, in the end, those capital values.

Residential real estate looks a very reasonable indeed sector for investment therefore. Either to buy for self-occupation or as a rental.