GasLog Partners (NYSE:GLOP) just announced all time high revenue, EBITDA and distributable cash flow, not to mention a solid 1.2x distribution coverage ratio. The company also raised its distribution in 2019 and bought back a significant amount of its common units. Further still, during the latest earnings call, management explained they remain very confident in the company's long-term outlook. This all sounds like a very attractive business, but the units plummeted about 49% after the earnings announcement because management dramatically reduced the upcoming distribution payment to unitholders, explaining they are "moving to a strategy that prioritizes the strengthening of our balance sheet through debt reductions." In our view, these actions make the company's preferred units significantly more attractive (because it frees up more cash flow to support them), yet the preferreds were dragged lower in sympathy with the common, thereby creating an increasingly attractive buying opportunity in GasLog's 9.6% yield preferred units. 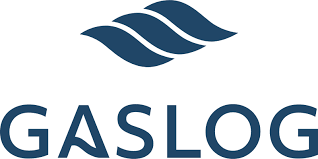 GLOP's fleet consists of 15 LNG carriers, including 10 vessels with tri-fuel diesel electric (TFDE) propulsion and five modern steam turbine propulsion (steam) vessels. GLOP has options and rights under which it may acquire additional LNG carriers from its parent GasLog Limited. We believe that such options and rights provide it with significant built-in growth opportunities. 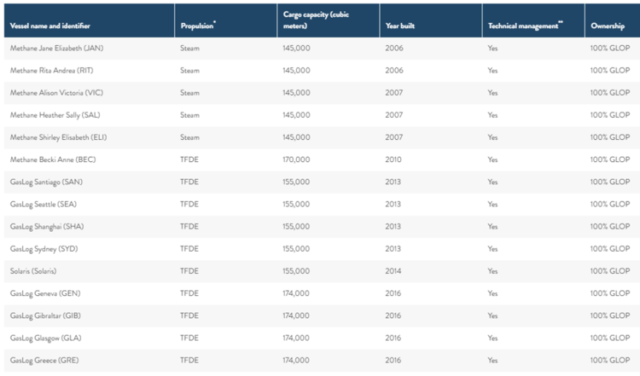 GasLog Partners LP has elected to be treated as a C-Corporation for U.S. federal income tax purposes. This means investors receive a Form 1099 and not a Schedule K-1. This is important because it makes life easier for investors around tax time.

The Elimination of IDRs

Prior to this week's announcement, GLOP's cash distributions to unitholders had grown at an average annual rate of ~8% since its IPO in Q214. Adding to the false sense of safety, investors noted that GasLog Partners had signed multi-year charters with high-quality customers, including a subsidiary of Royal Dutch Shell plc, Cheniere Energy, Inc. and Guvnor (the leases provide predictable cash flows and allows GasLog Partners to return cash to investors on a regular basis).

It is important to note that the distribution coverage ratio for Q419 stood at 1.2x, meaning it generated 20% more cash than what was needed to meet its distribution obligations. The ratio highlights the company's ability to pay cash distributions to its shareholders (a ratio of greater than 1 indicates that the company generates more cash than is required for distributions and shows strength in the business). And as shown in the chart below, GLOP has maintained a ratio of >1 every quarter since its IPO in 2014.

Further still, GasLog had been returning additional cash to investors by repurchasing common units as shown in the following chart. 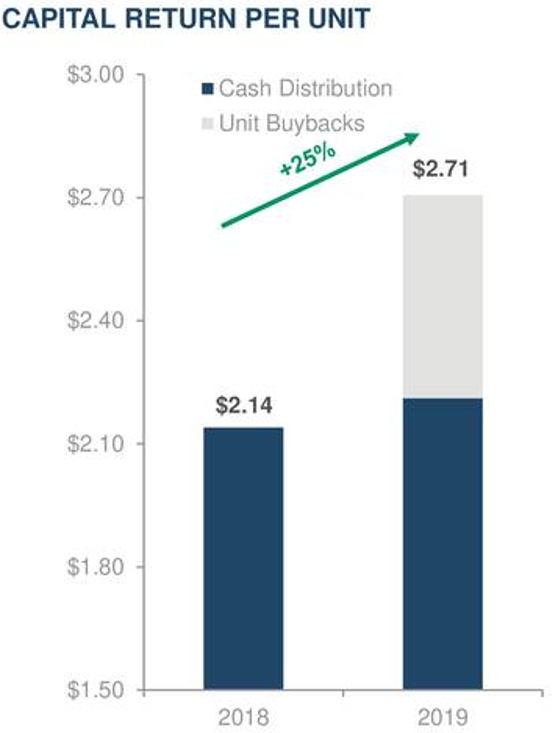 Why the GLOP Distribution Cut?

Essentially, management dramatically reduced the upcoming distribution (to $0.125/unit for Q1 from $0.561 for Q4) to strengthen its balance sheet thereby creating the capacity to be more opportunistic in the years ahead. According to Peter Livanos (Chairman of GasLog Limited and Director of GasLog Partners) during the call:

"when times change, the people who change quickly with those times are the ones who will benefit most for it. And so we're taking that step…

…strengthening his balance sheet means that has his breakeven costs on those opportunistic shifts will be lower, so he'll be more competitive and be able to trade them. And he'll be able to use his balance sheet in the coming years to be able to pick up assets when accretive assets become available. And I have no doubt in my mind. There are some people who are going to find themselves in an uncomfortable position the next two or three years with some of these speculative new buildings.

So we're getting ready, and we're getting ready to take advantage of that. It's not the most pleasant of things to do. But if I didn't get ready for that, I wouldn't be able to say that I had a sustainable business. Sustainability is not fixed, it means you change. And that's what we're doing."

Essentially, GLOP believes there is going to be distress for some of its peers in the years ahead, and they want to be able to take advantage of that by having the cash available to be opportunistic buyers at fire sales prices.

For more perspective, GLOP has lowered its own guidance for 2020 (as you can see in the following) chart, so the reduction is somewhat of a rightsizing to be consistent with the business. 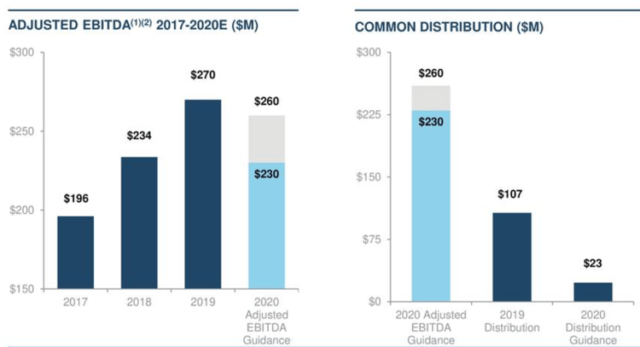 "Our plan for 2020 will reduce the Partnership's annual common distribution by $83 million and considerably decrease our cash outflows during the year. In the near term, we plan to prioritize debt repayment, while continuing to opportunistically repurchase our common units. In time, we expect today's decision will create greater flexibility for the Partnership to continue growing of assets with reduce reliance on common equity markets."

Orekar also explained that 2020 estimates are lower in light of GLOP recognizing (as of December 31):

"the non-cash impairment charge of approximately $139 million related to our five theme ships built in 2006 and 2007, primarily as a result of lower expected utilization and earnings estimates for these vessels."

Important to note, LNG demand globally is expected to grow significantly over the long-term which should be positive for GLOP in the future. In total, Energy Research & Consultancy Wood Mackenzie expects net LNG demand to grow by 150 million tons between 2018 and 2025 (see chart below). Although China's imports have been significant in recent years, it's important to note that other countries in Southeast Asia, together with Europe account for nearly two-thirds of the projected LNG demand growth 2025. 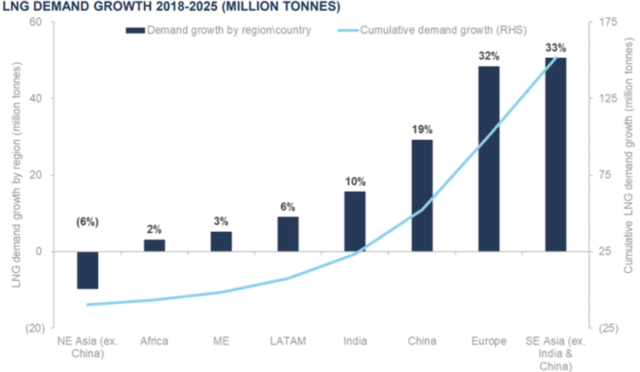 As can be seen in chart below, the market is expected to be structurally tighter through into 2021 based on the latest quarterly LNG supply growth estimates and based on the water shipping fleet plus scheduled vessel deliveries. In 2020, GLOP's fleet is 81% contracted and 75% of its open days are weighted toward the second half of the year when shipping demand is expected to be robust.

As shown in the chart below, spot rates generally bottom out in early spring and peak in the fourth quarter. GLOP is well positioned to benefit from this seasonality given that the majority of its charter expiry for 2020 is weighted towards second half, wherein the spot market rates are expected to be high. 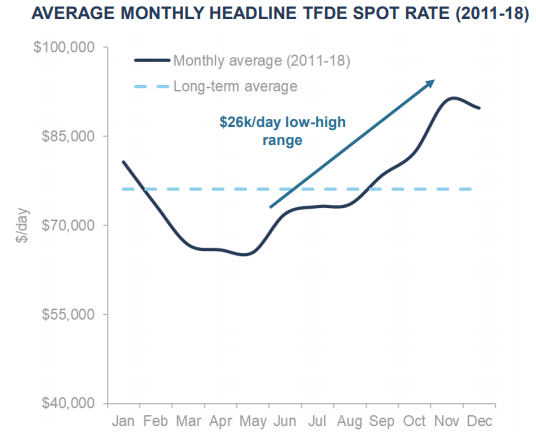 GLOP has issued three classes of Preferred units so far - 8.625% Series A, 8.20% Series B and 8.50% Series C. They're all cumulative (i.e. if GasLog misses a distribution payment, they're required to make it up later, so long as they don't go bankrupt), they're all redeemable by the company starting on the dates described in the table below, and the fixed rate of all three goes to a floating rate (as described in the table below) if GasLog doesn't redeem them (none of them have a stated maturity date).

All three of these preferred units sold off on Thursday (A was down 7.6%, B was down 8.9% and C was down 9.8%), and all three became more attractive (in our view) following the announced distribution reduction to the common units because it freed up more cash to support the preferred units (the preferred units are senior to the common in the capital structure), and because GLOP's distributable cash flow remains healthy. If you are an income-focused investor, all three are worth considering because of their attractive yields, discounted prices, and increased cash flow available. The preferred units will never experience huge price appreciation (because the company can eventually redeem them at $25), but they will be far less volatile than the common units and the big distributions are well covered.

In addition to lower-than-expected utilization and earnings estimates for 2020, GLOP faces other risks that should be considered:

International Maritime Organization ("IMO") Environmental Regulations: New IMO regulation are a risk, and have likely been a secondary contributor to the year-to-date price decline for units of GasLog and the industry in general. According to Reuters:

"From January 2020, United Nations shipping agency the International Maritime Organization (IMO) will ban ships from using fuels with a sulphur content above 0.5%, compared with 3.5% now."

Further, according to GasLog's annual report:

"These and other laws or regulations may require additional capital expenditures or operating expenses (such as increased costs for low-sulfur fuel or pollution controls) in order for us to maintain our ships' compliance with international and/or national regulations.

There remains a significant amount of uncertainty about the full impact of the regulations, as well as GasLog's ability to pass costs through to customers.

Parent Relationship: GLOP's future growth is largely dependent on a continuing relationship with GasLog Limited (GLOG). Specifically, uncertainty in winning new charters for existing and newbuild vessels may limit the drop-down pipeline for GLOP thereby impacting growth and payouts. However, as stated earlier, GLOP management believes there may be future opportunities for growth from distressed peers rather than only parent dropdowns. (Note: a dropdown refers to the transaction wherein the parent sells its asset (vessel) to the master limited partnership (GLOP). This helps parent to monetize its asset and at the same time provides the MLP with a new source of cash flow which is for growth. Parent GLOG recently had a dropdown pipeline of 14 vessels). 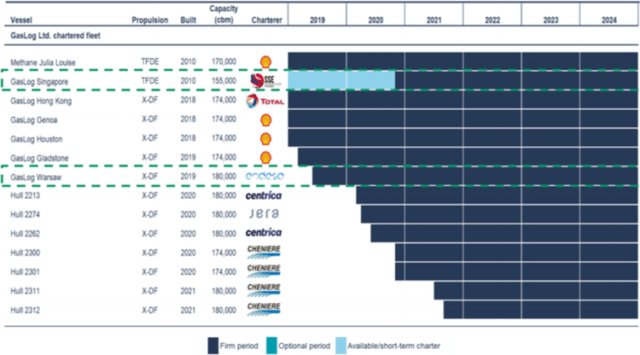 Given the abrupt about-face on GLOP's distribution (they went from using excess cash to raise the distribution and to buy back units, to abruptly cutting it, and ticking off a lot of investors in the process), it's difficult to predict what comes next for the common units (although a lot of volatility is likely on the menu). On the other hand, we believe the distribution cut to the common actually makes the preferred units even more attractive because it frees up more cash to support them.

All of the preferred units are attractive in our view. However, we like GLOP.PA, in particular, considering the high yield and the fact that its earliest redemption date is the latest among the three (GLOP will have to keep paying the A units the longest, whereas B and C could get redeemed earlier). Overall, if you are an income-focused investor that likes to buy attractive big yield at discounted prices, GLOP preferred units are worth considering. 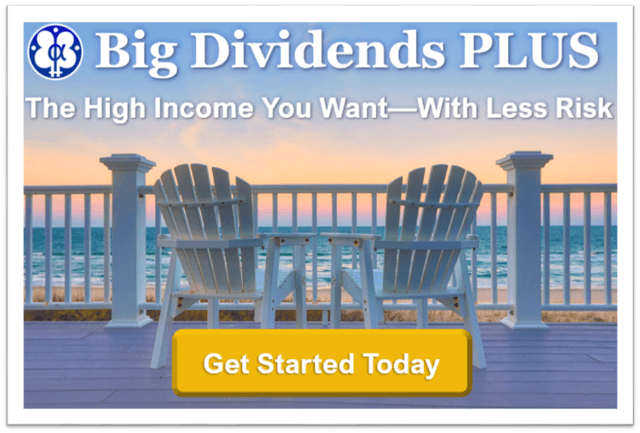 Whether you're retired, soon to be retired, or just like high income, we'll help you build a steady high-income portfolio, that you can use like paycheck, and with an account balance that grows. Big Dividends PLUS. Better. Smarter. More Profitable.

Try It Free for 2-Weeks, Before Prices Go Up!

Blue Harbinger
17K Followers
Author of Big Dividends PLUS
Helping you manage your income portfolio. Targeting 8-10%+ total returns.*
Use code "SA25" for 25% Off All New Memberships at www.blueharbinger.com. Our flagship membership service at www.blueharbinger.com covers top-growth stocks and high-income opportunities. Our Seeking Alpha marketplace service, Big Dividends PLUS, has been launched specifically to serve the needs of high-income investors.
- - - - - - -

Information presented is for educational purposes only and does not intend to make an offer or solicitation for the sale or purchase of any specific securities, investments, or investment strategies. Investments involve risk and, unless otherwise stated, are not guaranteed. Be sure to first consult with a qualified financial adviser and/or tax professional before implementing any strategy discussed herein. Past performance is not indicative of future performance.

Disclosure: I/we have no positions in any stocks mentioned, but may initiate a long position in GLOP.PA over the next 72 hours. I wrote this article myself, and it expresses my own opinions. I am not receiving compensation for it. I have no business relationship with any company whose stock is mentioned in this article.