Most of the silver is produced as by-product from copper and zinc/lead.

Each year, the U.S. Geological Survey publishes a report on world mine production and reserves. As precious metals investors, we are especially interested in the silver segment of this report which gives us extremely valuable information on the supply side of the silver market. 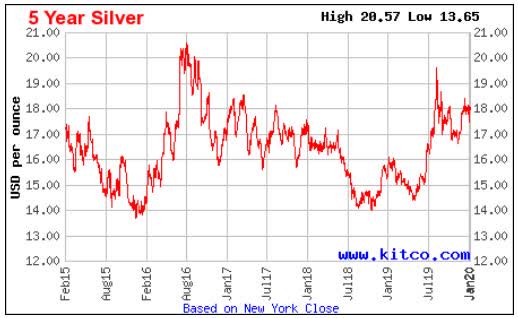 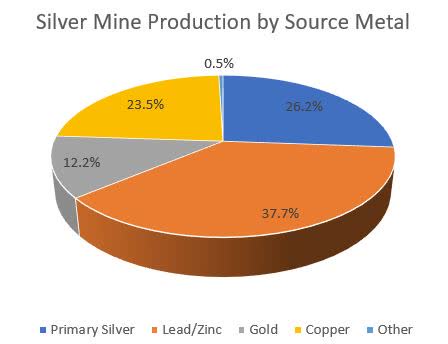 We are seeing a decrease in demand for base metals this year due to a slowdown in the economy and also due to the effects of the U.S. - China trade war and more recently the outbreak of the coronavirus. Copper took a big hit after the announcement of the coronavirus outbreak in China in January 2020. Chinese copper traders declared force majeur on lower copper demand. I cannot stress enough how important China is on a demand perspective. If China decides to quarantine cities, borders, airlines, manufacturing plants, this will have a huge impact on demand for base metals. Asia is the largest consumer of commodities and a decrease in demand for base metals will lead to a decrease in production of silver as a byproduct of base metal mining. 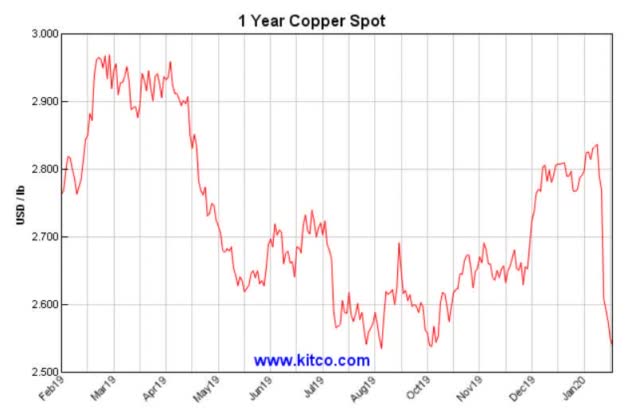 Interestingly, Statista reported that silver coming from primary silver miners decreased significantly in 2018 and this trend is going to continue going forward. Primary silver miners have enormous problems with declining ore grades and this is starting to show up in the numbers. Also very important to note is that declining primary silver supply only has a minimal effect on the silver price, because most of the supply is coming from base metal by-product (74%). 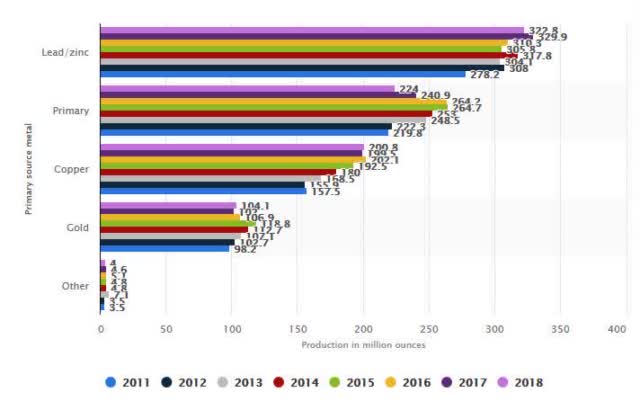 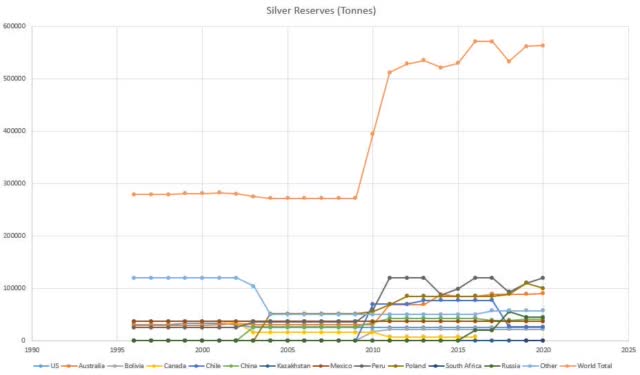 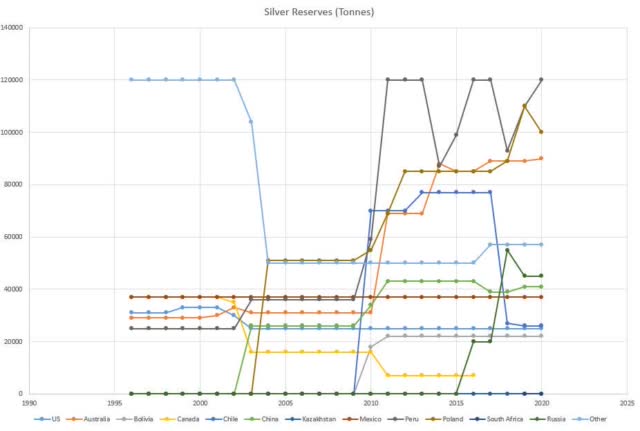 During 2019, we saw that Peru's silver reserves have risen to an impressive 120000 tonnes. On the production side, Peru has been doing well since 2013 with base metal mine production rising 30% from 2013 to 2017, but in 2018 we saw mining production decline again (see chart below from Statista). However, Peru expects its copper production to grow 27% and gold output to expand 12% in the next three years by 2022 (see second chart below from S&P Global Market Intelligence). 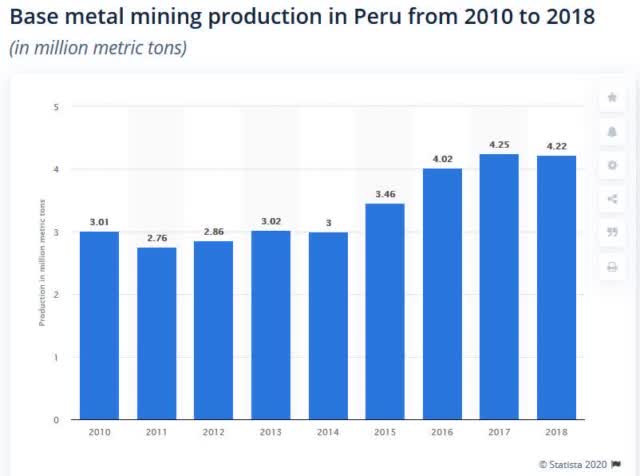 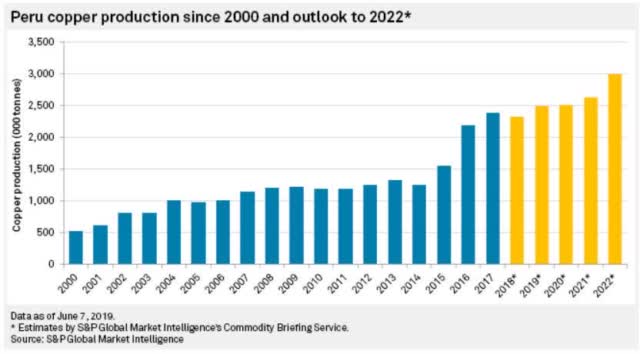 Now let's take a look at Mexico. It has been projected that 212 million ounces of silver will be produced in Mexican mines in 2020. The chart below from Tradingeconomics shows how Mexico's overall mining production improved in 2019. Silver reserves were unchanged at 37000 tonnes.

The third largest producer of silver is China and we have seen a nice comeback in 2018-2019. Silver production in China comes primarily from by-product of lead and zinc (95%), so we need to take a closer look at base metal mining. Mining production in China increased 5.6 percent in December of 2019 over the same month in the previous year (see chart below from Tradingeconomics). So it is likely that silver production will be growing in China. Silver reserves were unchanged at 41000 tonnes.

Looking at these numbers, base metal mining has been doing very well and a lot of silver is coming from there as a by-product. Nevertheless, it is a fact that silver reserves and grades are coming down and we will be facing a future where silver production will decrease as well. The decrease in primary silver production is evidence of that.

For example, Fresnillo had a terrible year as its ore grades kept declining. The underperformance of their stock price is indicating that things are getting worse. 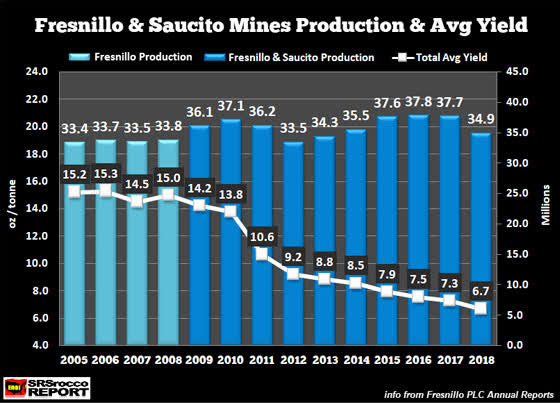 The conclusion is that primary silver mines face a deteriorating trend in their production profile and the amount of capital being put in exploration is almost non-existent, so more and more silver will need to come in as a by-product from base metal mining. Base metal mining production has seen a nice uptrend in 2019, but a recession could put a dent on that (and also on the silver supply). There is only one real cure to lower silver production and that is higher silver prices. Nevertheless, the current trend is still pointing to rising silver reserves and silver production but this could reverse any time.

Disclosure: I am/we are long PSLV. I wrote this article myself, and it expresses my own opinions. I am not receiving compensation for it (other than from Seeking Alpha). I have no business relationship with any company whose stock is mentioned in this article.

Follow Katchum and get email alerts
+
Add a comment
Disagree with this article? Submit your own.
To report a factual error in this article, click here.
Your feedback matters to us!