The CHF/USD has been climbing significantly due to gloomy market sentiment as a result of the coronavirus crisis.

That being said, the Swiss National Bank appears to be unusually tolerant of a stronger franc, with little action being taken to weaken the currency.

I expect further upside in the CHF/USD from here.

Back in December, I made the argument that the Swiss franc is likely to trade stationary against other major currencies going forward.

My reasons for making this assertion included a general decrease in risk-off sentiment by the markets, the stance of the Swiss National Bank that negative rates continue to remain necessary, and a decrease in concern regarding US-China trade fears.

However, contrary to my prior expectations, we have seen the CHF/USD rise significantly heading into 2020. 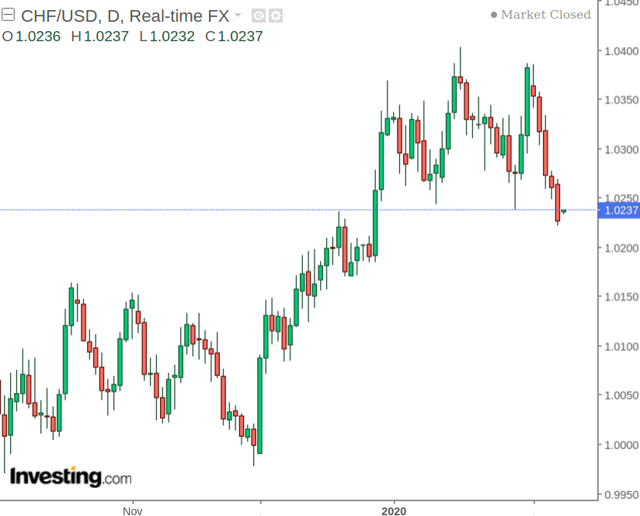 With the outbreak of the coronavirus in China, stock markets have been retreating as "risk-off" sentiment resumes. As a result, safe-haven currencies like the Swiss franc are currently in vogue and have been rising further.

In this regard, in spite of a recent short-term downtrend, we could expect an extended bullish run for the CHF/USD.

Given that much hinges on risk sentiment, it remains to be seen whether the coronavirus has the potential to become a global pandemic and whether markets will continue to retreat at this possibility. As it stands, the World Health Organization has chosen not to declare the disease as such.

That said, the SNB does not seem to be taking much action to counter a strong franc under these circumstances. For instance, the amount of cash held by commercial banks with the SNB has only risen by 0.22% recently. Moreover, the possibility of Switzerland being labelled a currency manipulator by the United States appears to have given the central bank some pause on lowering rates once more.

From a fundamental standpoint - in spite of the SNB's usual aim of keeping the Swiss franc weak to boost exports - growth metrics in Switzerland have been encouraging.

For example, Trading Economics reports that Swiss exports reached an all-time high of CHF 312 billion last year, even in spite of the US-China trade war. In spite of this, it is notable that the franc was strengthening significantly against other major currencies during 2019: 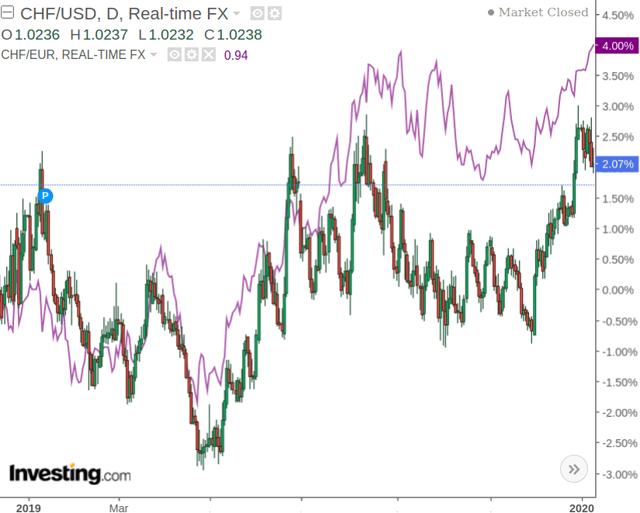 Consumer spending has continued to rise in Spain, while inflation levels remain low.

As we can see, inflation levels still remain quite low in spite of negative interest rates. This means that the Swiss National Bank could increasingly take the view that negative interest rates are not aiding in reaching inflation targets, and we could see a shift in sentiment on interest rate policy going forward. If the SNB shows signs of leaning in this direction, then this is likely to boost the franc significantly.

In this regard - aside from the ongoing coronavirus crisis - the economic landscape for Switzerland appears to be changing somewhat, and for this reason, we could well see the CHF/USD continue to ascend from here.