Antares Pharma's (ATRS) flagship product XYOSTED administered as an injection for testosterone replacement therapy has seen monstrous growth with prescription volume breaking through the 10,000 units/mo. mark in December 2019. While the company is not profitable, its net loss is not increasing as revenue compounds. Without further ado, let's take a look as to why the company's buy rating will be reiterated today. 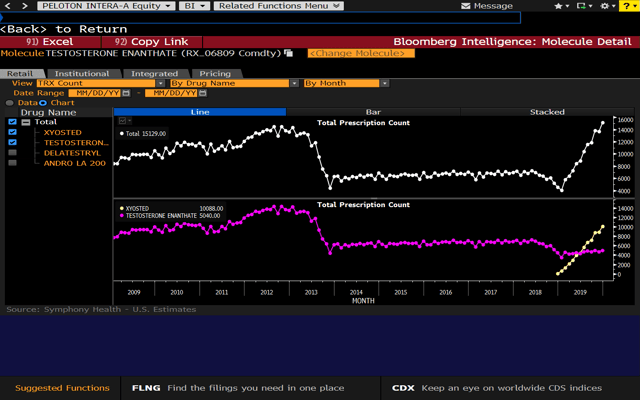 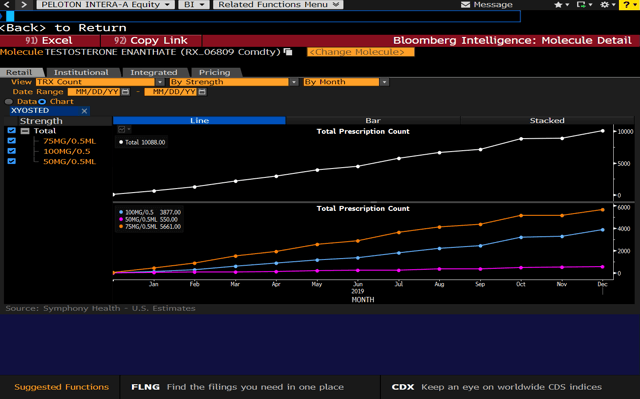 Since its launch in late 2018, XYOSTED has witnessed a momentous growth in terms of prescription volume. As of Dec 2019, monthly prescription count for XYOSTED has broken past 10,000 units compared to 5,000 units in June. Considering the drug has a list price of $500/unit, XYOSTED may bring in over $20M in revenues per quarter for ATRS in Q12020 at current growth rates. What amazes the author more, however, is the context at this growth is achieved. This was discussed in an article dating from last November, where the author compared the efficacy of several generic and branded testosterone replacement therapies currently on the market and concluded XYOSTED was one of the top tier options available. Furthermore, patents covering XYOSTED's injector last until 2028, guaranteeing nearly a decade's opportunity for the drug to grow and aggressively capture market share.

Furthermore, the market for testosterone enanthate has been declining since 2012 but has seen this trend reverse with the help of XYOSTED, which now accounts for over 60% of all prescription volume. Again, this is a considerable feat since generics are available for less than 10% of the list price of XYOSTED. Hence, management's efforts to grow sales of XYOSTED organically must be applauded; however, this is also where problems for ATRS begin to materialize. 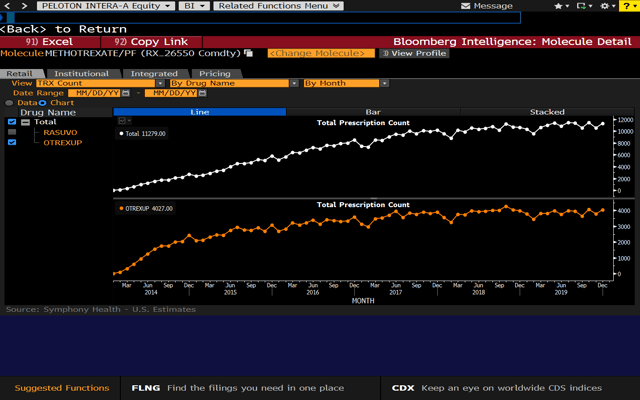 Meanwhile, Otrexup's Rx count has largely remained stagnant at ~4,000 units/mo. since its launch in 2013. Unfortunately, the drug's pricing of $161/mo. makes it extraordinarily cost prohibitive for arthritis patients considering several oral methotrexate generics are available at a cost of just $10/mo. Hence, it is very likely that prescription count for Otrexup is going nowhere for quite some time, or even further downwards as several of the drug's injector patents expire over the span of this decade. 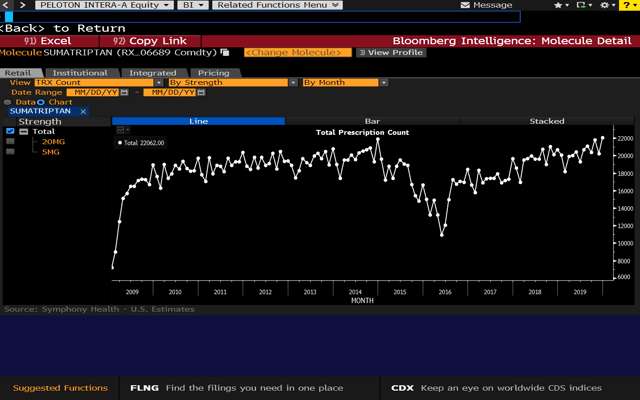 In addition, ATRS's Sumatriptan marketed in a partnership with Teva Pharmaceuticals (TEVA) indicated for the treatment of migraine headaches has stalled since hitting a peak of ~20,000 units/mo in the early 2010s. Moreover, the next generation of migraine treatments, such as that of TEVA's ajovy, has recently witnessed spectacular clinical success as to render products such as generic STATdose Pen/Sumatriptan outdated in terms of efficacy. Overall, investors should expect, at best, marginal growth for the drug moving forward. 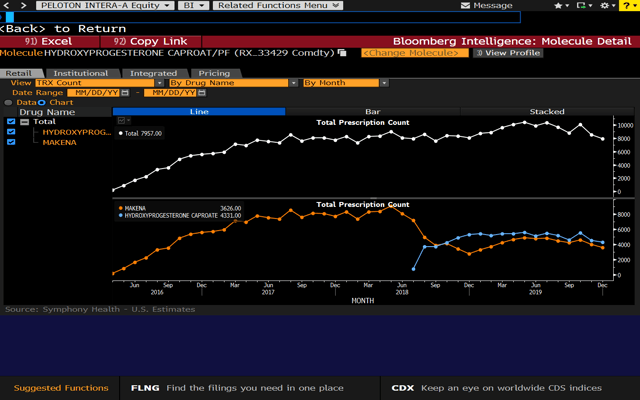 In Oct 2019, the FDA's Adcom committee voted to withdraw Amag Pharmaceuticals' (AMAG) Makena for the treatment of pre-term birth in women from commercialization. The drug failed to meet its primary endpoints in a confirmatory trial, which was required as part of its Accelerated Approval program. While the Adcom's decision is not binding, the drug's poor clinical data readout remains a tough sell to physicians. Indeed, even Makena's newly approved auto-injector manufactured by ATRS has seen its prescription volume stagnate at ~5000 units/mo. Regardless, the outlook for Makena is grim considering generics are widely available for less than one-tenth of its branded list of price. When the FDA meets again in 1H2020 regarding a final decision of Makena's commercialization, ATRS investors should expect the worse and anticipate a wipe-out of nearly $7.5 million to $15 million in estimated annual future revenues. 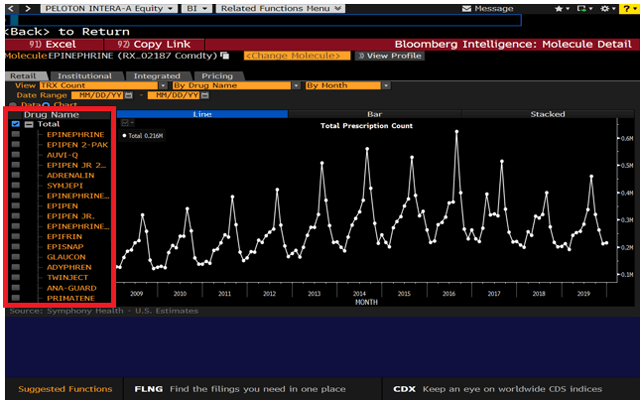 Another source of ATRS's collaboration revenues, generic Epipen (partnered with TEVA), has not been effective at capturing market share. Readers should note above the sheer volume of branded and generic competitors available, including EpiPen, EpiPen Jr, Adrenaclick, Auvi-Q, and Symjepi. Keep in mind, ATRS is only entitled to a 10% royalties agreement on sales of its generic injectors, and investors should expect at most $10 million annually from this product.

There is light at the end of the tunnel, however. Recently, Idorsia announced Phase 2 results regarding a single subcutaneous injection of selatogrel for the treatment of adults with acute myocardial infarction. The data is stunning, 89-90% of the 115 patients who took the drug saw their platelet reactivity units fall below 100 with robust statistical significance (P<0.0001) despite the presence of mild adverse events such as bleeding. As the maker of the selatogrel injector, ATRS will be entitled to royalty revenues in the highly likely event of approval. However, investors should be prepared to witness no revenue from this section of the pipeline until 3-5 years down the line when selatogrel is likely to enter commercialization. 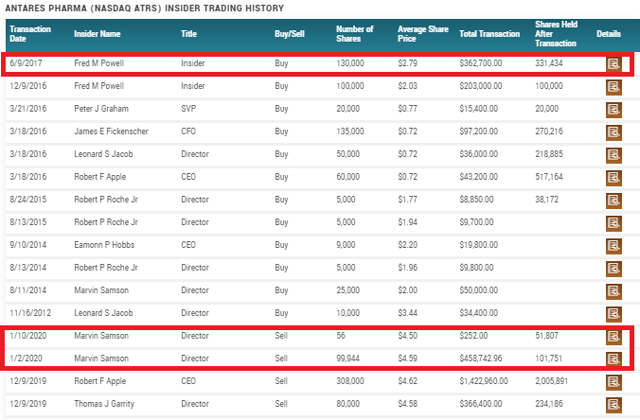 As readers can see, the last insider buy for ATRS occurred in June 2017 while the last insider sell occurred as recently as this January. This does not bode well for shareholders, as it suggests management is en route to cash-out after product launches. Meanwhile, share-based compensation expenses along with cash salary account for nearly 5-10% of ATRS's overall revenues. Such lavish spending of stockholder's capital while shares underperformed is certainly not a wise allocation of capital on management's behalf.

In addition, communication between investors and management has seen its fair share of woes due to the opacity of the status of pipeline products such as exenatide and teriparatide. For the former, investors have been waiting years for this product to be marketed by TEVA while the latter has only begun commercialization efforts in Spain.

Currently, ATRS has a balance of cash equivalents (~$40M) and long-term debt (~$40M) with a combined enterprise value north of $600M. The company is also operating at a ~$12M loss in terms of annual free cash flow. This is concerning as ATRS's ~45% gross margin is not quite on par with the industry avg. and is spending nearly all of its gross profits on sales and administrative expenses. The company's track record of developing innovative products is hence shadowed by its consistent failures to achieve profitability over the past 5 years. Meanwhile, the 10% of revenues spent of R&D is about on par with the 10% allocated each year on stock awards/cash salary paid out to management. Although growth in XYOSTED is stellar, investors should beware of the risk factors such as the company's failures to achieve profitability.

Despite the company being unprofitable, the author considers a growth premium of 5-6x EV/Sales to be acceptable for a company that is nearly doubling its revenues each year due to monstrous growth from XYOSTED. Keep in mind, ATRS's net losses are not increasing as its revenues grow. This leaves ample room for the company to restructure and to improve its efficiency in terms of margins. In addition, management's lack of insider buying and clarity on several pipeline products is balanced by their ability to sell a drug at a 10x premium to generic competitors while simultaneously achieving prescription growth. As a result, shares of ATRS will have its buy rating reiterated as of today.

Disclosure: I am/we are long ATRS. I wrote this article myself, and it expresses my own opinions. I am not receiving compensation for it (other than from Seeking Alpha). I have no business relationship with any company whose stock is mentioned in this article.