The recent price appreciation of Beyond Meat stock has no real fundamental backing.

The increased competition in the faux meat category will make it harder for the company to show triple-digit growth.

Our discounted cash flow model shows that Beyond Meat stock is overvalued by more than 40%.

We opened a short position in Beyond Meat and plan to hold it up to a year.

As investors, we always need to be disciplined enough not to buy shares of companies that we target at expensive valuations. Beyond Meat (BYND) has a noble goal in mind. The reduction of animal-based meat has a lot of positive environmental implications. But no matter how good the company’s intentions are, if there’s not enough margin of safety, then from an investment point of view such a company at the very least should be avoided. The recent price appreciation of Beyond Meat stock has no real fundamental backing and as a result, the current market price doesn’t represent the fair value of the company. Our DCF model clearly shows that Beyond Meat is overvalued by around 40% and we decided to short the company’s stock. The increased competition in the fresh plant-based meat category will make it harder for Beyond Meat to sustain its current pace of growth and as a result, its stock will depreciate in value in the foreseeable future.

Later in February, Beyond Meat will announce its Q4 earnings results that will probably beat the analysts’ estimates. Since the faux meat industry is only starting to gain traction, Beyond Meat has enough room for growth and will be able to create some additional shareholder value in the long-term. Currently, Jefferies estimates that in the next two decades’ plant-based meat products will account for 9% of the overall meat market, while UBS believes that alternative meat market will grow at 28% CAGR and will be worth $85 billion by the end of 2030. As we can see the demand for faux meat is there and the recent IPO of Beyond Meat in May helped the company to become the only pure-play stock in the plant-based meat business. This resulted in the rapid appreciation of its stock earlier in June-July and recently in January.

However, as Beyond Meat grows, it will start to face more and more challenges that will subsequently slow down the current pace of growth of its revenues. At the moment, we see three groups of competitors that will make it harder for Beyond Meat to achieve its financial goals.

The first group includes the producers of animal-based meat. Conventional meat has been a part of our food ecosystem for centuries and as the human population grows, so is the demand for it. Statista forecasts the global meat market to grow at an annual rate of nearly 4% and to be worth more than $1 trillion in the next three years. The absolute majority of fast-food chains and restaurants will continue to serve animal-based meat, and it will take a long time, if ever, for consumers to considerably shift their preferences and look for alternatives. At this stage, Beyond Meat is a major player in a small niche market and while the recent growth of the plant-based meat market has been remarkable, its customer base is still too small in comparison to the customer base of the conventional meat market.

The second group includes producers of lab-grown meat. Unlike plant-based meat, lab-grown meat is much cheaper, as it requires fewer resources to produce 1 kilogram of beef. One report suggests that cultured meat will overtake plant-based meat in the next two decades, as it will be more cost-efficient to grow the meat from animal cells than from plants. Last year, Tech Crunch reported that lab-grown meat could hit the shelves as early as 2022, while AT Kearney believes that the cultured meat market will grow at a CAGR of 42% from 2025 to 2040. While a lot of reports suggest that the conventional meat market will be depreciating in value in the next few decades, there’s no guarantee that plant-based meat will be the one to disrupt that market.

The third group includes direct competitors from the plant-based meat business. The threat of new entrants in this business is extremely high. While at the moment Beyond Meat greatly benefits from being one of the largest producers of faux meat, the competition already intensifies. As the first-mover advantage slowly evaporates, the company will not be able to show the triple-digit growth of its revenues anymore.

To understand the current ruthless competitive landscape, let’s just take a look at a number of events that happened recently. When Tyson Foods (TSN) sold its stake in Beyond Meat in April, it didn’t waste any time and created its own Raised and Rooted brand that produces its own version of plant-based meat. After that, Nestle (OTCPK:NSRGY) also decided to jump on a train and introduced its own plant-based burgers under the Sweet Earth brand. Starbucks (SBUX) recently announced that it will add its own faux meat sandwich across a number of its stores. While Beyond Meat greatly benefits from its partnership with McDonald's (MCD) and KFC, there’s nothing from stopping those fast-food chains to start developing their own versions of faux meat burgers. In reality, Beyond Meat doesn’t have any real competitive advantages against its rivals. When Impossible Food (IMPF) enters public markets in the next year or two, Beyond Meat will no longer be the only pure plant-based meat stock on the market and its early mover advantage will also fade away.

The reality is that on the fundamental level Beyond Meat will not have the same pace of growth of its revenues as its stock price. Obviously, it’s impressive that the company managed to increase its revenues in Q3 by nearly 250% to $91 million. However, considering that the whole meat market is worth close to $1 trillion and the plant-based market will be worth $85 billion, $91 million in revenue looks like a drop in the bucket. That’s why we believe that with more than $7 billion in market capitalization, Beyond Meat is definitely overvalued at this stage.

Since the majority of purely plant-based meat producers are private companies, we were unable to conduct a full-scale comparative analysis. Nevertheless, we managed to create a discounted cash flow model, which reflects our overall bearish sentiment.

Revenue estimates in the first few years are in-line with Capital IQ forecast. We estimate the company to make around $233 million in revenue this year, which represents a 165% Y/Y growth, but in further years the growth rate will be lower amid intensified competition. We calculated the fair value of Beyond Meat to be $63.07 per share, which represents more than a 40% downside from the current market price. 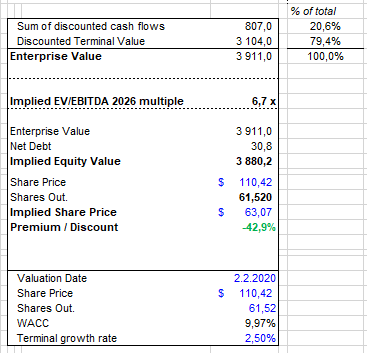 As we said at the beginning, we believe that Beyond Meat will be able to create some additional shareholder value in the long-term. However, at the current market price, its stock is definitely overvalued. The recent surge of its stock price is a great example of irrational exuberance and we decided to open a short position in the company. We believe that the upcoming earnings results are already priced in and as the excitement slowly fades away, the company will once again trade close to its fair value in the next 6 to 12 months. Thereby, we plan to hold our short position no longer than a year.

The bottom line on Beyond Meat:

Disclosure: I am/we are short BYND. I wrote this article myself, and it expresses my own opinions. I am not receiving compensation for it (other than from Seeking Alpha). I have no business relationship with any company whose stock is mentioned in this article.

Follow Bears of Wall Street and get email alerts
+
Add a comment
Disagree with this article? Submit your own.
To report a factual error in this article, click here.
Your feedback matters to us!