The 52-week analysis of Invesco Solar Portfolio ETF shows that it has increased its trading price by more than 53%.

Sunrun has operated a solar-as-a service business model where it has offered home solar application and battery energy storage systems, its latest being Brightbox.

Imposition of tariffs on CSPVs since February 2018 have driven prices of solar modules lower in the US.

Enactment of the California law requiring all family units in the state to have solar panels has increased demand and is expected to save energy costs up to 30 years.

Invesco Solar Portfolio ETF (TAN) has increased its trading by 28.9% from January 4, 2016, owing to a surge in the shift from fossil fuels to renewable energy. A 52-week analysis shows that it has increased by 53.55%. In this article, I will explain why the imposition of tariffs and quotas on imported CSPV products and the use of customized installation and payment systems of energy are the main game changers in the solar business. Also, the effect of the new legal requirement for solar installations in some parts of America will be investigated as turning solar power stock into a bullish market.

There have been significant price changes of crystalline silicon photovoltaic cells (CSPVs) and solar modules ever since the enactment of the tariffs and quotas on imports. According to the US International Trade Commission's report released in February 2020, two years after the enactment of the safeguard measures on February 7, 2018, we have seen decreased prices of PVs that have, in turn, increased both domestic and imported solar modules. In the period between 2017 and 2018, there was a decline in both the employment and financial performance of CSPV cell manufacturing plants. The trading price for TAN hit a low of $17.04 on April 17, 2017, after recovering from a low of $16.56 in December 2016.

The pricing trend for the PV cells has changed significantly in the past decade. This decrease has encouraged both import and domestic production that has, in turn, improved the solar business and made solar stocks very lucrative. In an analysis of 150,000 PVs in 2011, the U.S. Department of Energy recorded that in 2011, the median price for residential PV cells was $6.13 per watt. This price also applied to small commercial solar systems ranging from 10kW and below. For commercial solar PV cells above 100kW, the price of installation stood at $4.87 per watt. The utility-scale PV systems were installed at $3.42 per watt.

Price statistics by Energy Sage states that in 2020, the price of solar panels had decreased to $2.96 per watt which translates to $13,142 after application of federal tax credits. We are actually looking at a decrease of more than 39.22% for large commercial PV cells across the US. Average solar installations have, in turn, reduced to between $2.57 ($11,411 after tax credits) and $3.35 ($14,874 after tax credits). This price range represents a decrease of up to 58.075% since 2011 and before the tariffs were imposed. The following picture represents the average cost of installing solar panels (before and after tax credits) as applicable in the year 2020. 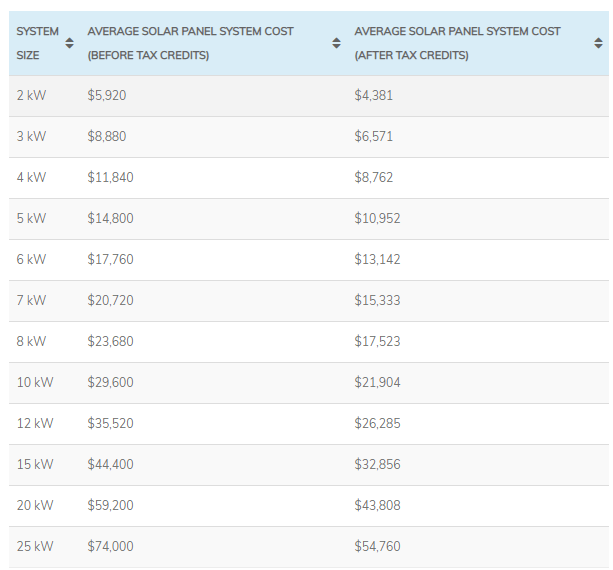 In residential systems, the price of PV modules has dropped to range between $0.65 and $0.73 per watt.

Sunrun (RUN) trading at $21.42 on February 10, 2020, indicated a 7.31% increase from trading at $19.96 on February 11, 2020. Since 2007, Sunrun has operated a solar-as-a service business model. In 2019, the company was identified as not only leading in home solar application but also in battery energy storage systems as well. The company has reduced its price range to at times including no upfront costs in installation of clean energy to households.

In fact, when compared to traditional electricity, home owners are able to credit savings when using solar clean energy. In 2020, the company had operationalized the Bright-box battery for home services. Using this platform, the company is able to use modern technology dubbed "smart inverter" that manages home solar power, battery storage systems, and utility power. Families are able to benefit from long-term finance options of solar projects that may run up to 20 years at predictable prices. Most importantly, it covers the solar designs, the offering of installation services, financing of the project, insurance, and management of the system as a whole. 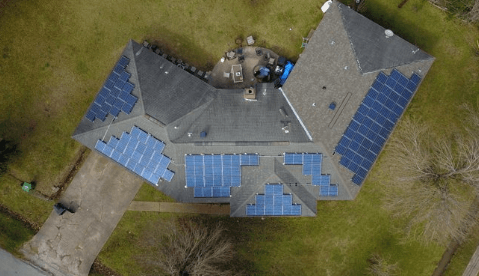 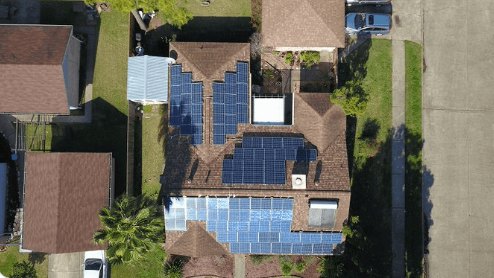 As seen in the two pictures above, each house has a customized solar installation that is compatible with its location and environmental morphology. These services have appealed to customers to the extent that solar installations are constantly increasing in the US alone YoY.

The US Department of Energy was reported to estimate that solar installations by end of 2020 will have reduced by 75%. This reduction means that up to 27% of US electricity will be generated by solar power alone. Additionally, by 2050, the emission of greenhouse gases will have reduced by approximately 28% due to the application of solar power.

The State of California signed into law, the legal requirement that all new homes (single or multifamily condominiums up to 3 stories tall) have solar panels or be powered by solar energy. The law took effect on January 1, 2020, under the new California building codes. California is the largest State whose households are powered by solar systems in the US. But despite this leap, the state keeps moving higher and higher. In 2006, under the leadership of Gov. Schwarzenegger, the "million solar roof" project began that aimed to increase the households powered by solar energy to more than a million. The following graph shows the progression before and after the declaration of this initiative. 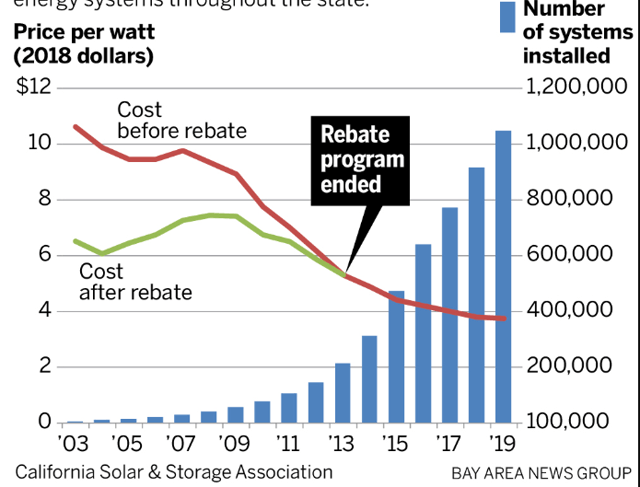 This graph shows that the demand for solar power in the US is rapidly increasing. In 2019, more than a million homes had solar systems in California alone. More than 500,000 homes had installed solar systems in the state after the tax rebate program was terminated in FY 2013-2014.

Estimates by the California Energy Commission show that this new building mandate (of solar systems) would add a total of $9,500 to the cost of home constructions. However, it would save up to $19,000 in costs of energy and home maintenance for a period of up to 30 years. This cost will be absorbed by both the home buyers, but it would, in effect, be handled by the home developers. Home developments are scheduled to increase prices from between $8,000 and $13,500 depending on the area of location.

While this law is specific to California, the effects are expected to appear in the rest of the country. The demand for solar systems will definitely push the price of solar stocks.

The imposition of tariffs and quotas have seen an upsurge in the solar business. Additionally, solar companies such as Sunrun have adopted customized services that have appealed to clients. The number of households that installed solar panels increased from 1.3 million in 2016-2017 to surpass 2 million in 2019. It is expected that the number will reach 4 million in 2023. In addition to this rapid increase, California still passed a law that would require new family units to have solar systems in their roofs. In spite of the cost, the benefits accrued will see the new homes reduce their energy and maintenance costs for the next 30 years. Based on these reasons, we are bullish with Invesco Solar Portfolio ETF.

Follow Stella Mwende and get email alerts
+
Add a comment
Disagree with this article? Submit your own.
To report a factual error in this article, click here.
Your feedback matters to us!