Since the publication of our initial bearish article on GameStop in April 2018, the company’s stock has depreciated in value by more than 65%.

We believe that digital downloads, subscription services, and cloud gaming will force GameStop out of business.

Nevertheless, shorting the stock at the current price is too risky, as it currently trades below its book value.

Since the publication of our initial bearish article on GameStop (GME) in April 2018, the company’s stock has depreciated in value by more than 65%. At that time, we believed that the company’s stock represents only a 10% downside and we did not expect it to tumble like it did in the last two years. Currently, GameStop faces an uphill battle, as its stock continues to depreciate in value amid the rise of digital downloads, subscription services and cloud gaming, which in our opinion will force the company out o f business in the long-term. Nevertheless, we do not think that shorting the stock at this stage makes sense, as the company is currently trading below its book value and there’s not enough margin of safety to justify the short position in the first place. With nearly $300 million in cash and cash equivalents and close to $1.3 billion in inventory, GameStop will be able to live to fight another day. However, in the long run, it’s doomed to fail. 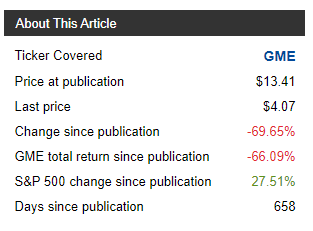 No Hope for The Future

In 2019, the gaming industry had its best year so far, as it increased in value by 7.2% and was worth around $148.8 billion at the end of December. In addition, the overall market also had one of its best years, as the S&P 500 Index increased by 28.9% in 2019. However, GameStop, which we all know is one of the most widely known gaming retailers, has not only underperformed in an industry that has been constantly growing but also suffered a 52% depreciation of its stock in one of the best bullish markets in history. Its latest Q3 report showed that the company continues to lose market share, as its same-store sales declined 23.2% year-over-year and as a result, its revenue of $1.44 billion was down 31% on an annual basis. Q3 was also the second quarter in a row when earnings per share were negative and the company was unable to meet the analysts’ EPS and revenue estimates. Considering the current state of affairs, it’s highly unlikely that GameStop will be able to stop the bleeding sometimes soon. Having close to $300 million in cash and nearly $1.3 billion in inventory is the only thing that is helping the company to stay afloat for now.

To improve the situation and somehow restore the faith of its shareholders, GameStop has been relentlessly working on cutting down its costs and fully reinventing itself. The management believes that one way to stop the bleeding is to become an eSports hub. The problem with this idea is that eSports is only a $1.1 billion market. It will take a lot of time for GameStop to make competitive gaming a sizeable stream of income and it will also require lots of cash to redesign all of its most popular stores. And if the management cannot successfully compete in a $148.8 billion video gaming industry, then why should shareholders even believe that the company will be able to improve its financials in a much smaller $1.1 billion market. The reality is that software and hardware sales will continue to be GameStop’s major sources of income in the foreseeable future and the company will suffer from it, as the industry is rapidly changing thanks to three different disruptors.

Digital downloads made it easier for publishers to sell their titles to the end-user, while the overwhelming number of consumers also prefer downloading games instead of buying them in stores. As a result of this, GameStop’s software sales were down 32.6% in Q3 and they will continue to decline going forward.

One major advantage that physical disks had against digital downloads was the ability to play the newly launched games without the need to fully install them in the first place. However, thanks to the introduction of pre-load systems, players are now able to download their favorite titles on consoles and PC before the initial launch and play them the moment they are released. Gamers no longer need to stay in lines in order to acquire the most anticipated titles from the store. The truth is that there is no advantage in owning a physical disk anymore.

The second disruptor is subscription services. In recent years, the rise of services like Xbox Game Pass, Uplay+ and EA Access gave consumers the ability to play a vast majority of popular titles online for a fixed monthly fee. As a result, companies that provide such subscription services were able to generate a much broader customer data and increased the engagement of titles from their respective libraries. In October, Microsoft (MSFT) said that users of their Xbox Game Pass service started to play 40% more games, while in November it was reported that the number of subscribers doubled over the year. As a retail company, GameStop will never be able to create its own subscription service and as a result, it will continue to lose more customers, who are slowly shifting to those digital services.

The third disruptor is cloud gaming. Unlike music or motion picture streaming, game streaming is a different beast. So far, latency issues have prevented companies from successfully launching their own cloud gaming services. However, with the upcoming full-scale implementation of 5G, gamers will finally be able to play their favorite titles on various devices without any input lags. Currently, only Google (GOOG)(GOOGL), Microsoft and Sony (SNE) have the ability to successfully test their own cloud gaming services and so far the results have been impressive. It will take a couple of years for such services to exit the beta stage and become fully functioning products. However, as such services become more and more accessible, the need to constantly update your console or PC to play the latest games will fade away and as a result, GameStop is at risk of losing revenues from its already declining hardware business.

Those three disruptors, in our opinion, are already forcing GameStop out of business and we do not believe in the company’s ability to reorganize itself due to the fact that it’s exposed too much to gaming software and hardware businesses. But once again, the only thing that GameStop has for it is its relatively strong balance sheet. The management so far has been successful in liquidating its assets. In the last 12 months, the company reduced its inventory by roughly $600 million and completed its expense reduction plan by 50%. GameStop has more than $1 billion in cash and inventory combined and as it continues to close more and more stores, it will be able to weather the storm for some time.

While we do not believe that GameStop has a bright future ahead, we also do not think that shorting the company’s stock at this price is a smart thing to do. Currently, GameStop is one of the most heavily shorted stocks on the market and the announcement of any positive development could lead to a massive short squeeze. Also, while the stock has been yielding a negative return of 35% since the beginning of the year, the company’s current book value is more than $9 per share. The lack of margin of safety is something that makes it hard for us to justify shorting the stock at these levels and thereby we decided not to open any position in the company.

The bottom line on GameStop:

Follow Bears of Wall Street and get email alerts
+
Add a comment
Disagree with this article? Submit your own.
To report a factual error in this article, click here.
Your feedback matters to us!