Fisher has substantial stakes in several ETFs/ETNs and hundreds of very small positions. Together, they account for more than one-third of the 13F portfolio.

This article is part of a series that provides an ongoing analysis of the changes made to Kenneth Fisher’s 13F stock portfolio on a quarterly basis. It is based on Fisher Asset Management’s regulatory 13F Form filed on 02/12/2020. Please visit our Tracking Kenneth Fisher's Fisher Asset Management Holdings article for an idea on his investment style and philosophy and our previous update highlighting the fund’s moves in Q3 2019.

This quarter, Fisher’s 13F portfolio value increased ~9%, from $91.13B to $98.96B. The number of holdings decreased from 903 to 898. Significantly large positions decreased from 66 to 62. The five largest individual stock positions are Apple Inc. (AAPL), Visa Inc. (V), Microsoft (MSFT), Amazon.com (AMZN), and Alibaba Group Holdings (BABA). Together, they account for ~18% of the 13F stock portfolio.

Note: Fisher manages ~68,000 private client accounts and over 150 institutional accounts. Each such portfolio is personalized to client requirements, and beating the S&P is not the focus for many of them. "13F Portfolio performance", which would be the performance of the sum total of all such monies in 13F securities, is an unknown. Some institutions pulled money from Fisher Investments in October last year following inappropriate comments by Ken Fisher that were made public. Despite that negative, Fisher Investments still managed to attract more investment capital during the quarter.

To know more about Ken Fisher, check out his Research Papers (most notably in Behavioral Finance) and investment books.

Visa Inc.: The Visa position was first purchased in 2012 at much lower prices compared to the current price of ~$207. The size of the stake has more than tripled in the last six years through incremental purchases almost every quarter. The position is now the second-largest stake at 3.84% of the portfolio.

Procter & Gamble (PG): PG is a long-term 0.65% of the 13F portfolio position that has been in the portfolio since before the financial crisis. The original position was increased by just over 75% in 2012 at prices between $60 and $70. The six-year period through 2018 had also seen periodic buying. Q1 2019 saw an about-turn: a ~50% selling at prices between $90 and $104. The stock currently trades at ~$124. The last three quarters have seen only minor adjustments.

Microsoft Corporation: MSFT is a top-three 3.40% of the portfolio position. It is a very long-term stake that has been in the portfolio for well over a decade. The two years through Q2 2019 had seen a combined ~30% increase at prices between $69 and $137. The stock is now at ~$185. Last quarter saw a ~3% stake increase, while this quarter there was marginal trimming.

Intel Corporation (INTC): The bulk of the 1.63% portfolio stake in INTC was built in 2008 in the high teens. The position has seen consistent incremental buying since 2013. There was a ~10% stake increase in Q1 2018 at prices between $42.50 and $52.50. The stock is currently at $67.46. The last six quarters had seen minor increases, while this quarter there was marginal trimming.

The portfolio has several positions in different ETNs and ETFs - they account for around 15% of the 13F portfolio. Fisher also had large stakes in the following businesses per the latest 13G filings: Stratasys Ltd. (SSYS), Atlas Air Worldwide Holdings (AAWW), Veeco Instruments (VECO), and Stamps.com (STMP).

The spreadsheet below highlights changes to Fisher’s 13F stock holdings (only positions that are over 0.5% of the 13F portfolio each are individually listed) in Q4 2019: 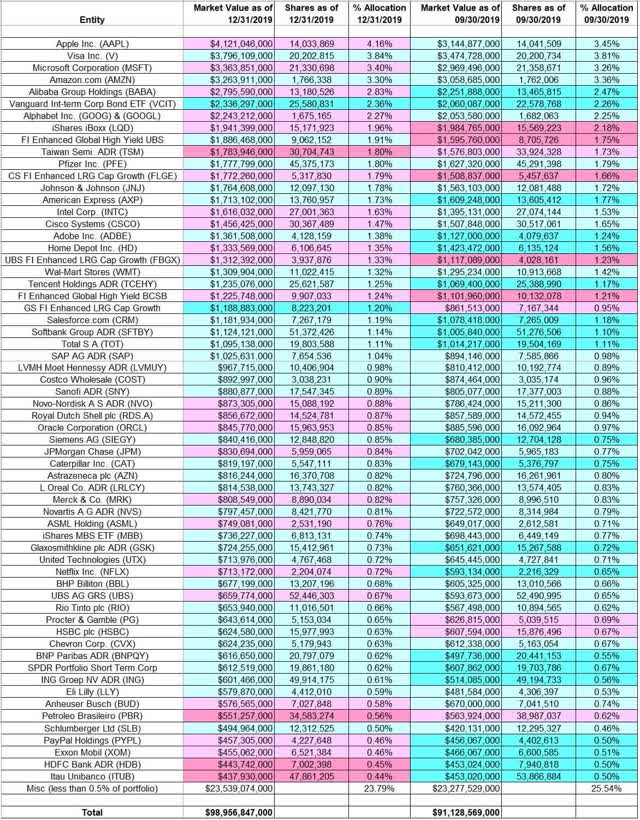 Disclosure: I am/we are long AMZN, BP, GE, GSK, SFTBY. I wrote this article myself, and it expresses my own opinions. I am not receiving compensation for it (other than from Seeking Alpha). I have no business relationship with any company whose stock is mentioned in this article.

Follow John Vincent and get email alerts
+
Add a comment
Disagree with this article? Submit your own.
To report a factual error in this article, click here.
Your feedback matters to us!