When you look at Disney's acquisition track record, you can see how each transaction has something in common: it adds content to Disney's Empire.

The second reason why Disney didn't increase its dividend is most likely because it wants to use its cash flow to grow its streaming services.

After reviewing the possible reasons why Disney chose not to increase its dividend for 2020, I feel comfortable keeping my shares.

This is old news as it was reported in December, but I wanted to highlight a situation: Disney (NYSE:DIS) didn't increase its dividend as it usually does at that time of the year. Management announced a bi-annual dividend of $0.88/share. Now, let's be honest, you don't buy shares of DIS to pay your utility bills every month (unless you can buy hundreds of shares!). But, the fact DIS didn't increase its payout goes directly against my investment philosophy.

The Walt Disney Co. owns the rights to some of the most globally recognized characters, from Mickey Mouse to Luke Skywalker. These characters and others are featured in several Disney theme parks around the world. Disney makes live-action and animated films under studios such as Pixar, Marvel, and Lucas Film and also operates media networks including ESPN and several TV production studios. Disney recently reorganized into four segments with one new segment: direct-to-consumer and international. The new segment includes the two announced OTT offerings, ESPN+ and the Disney SVOD service. The plan also combines two segments, parks and resorts and consumer products, into one. The media network's group contains the U.S. cable channels and ABC. The studio segment holds the movie production assets. 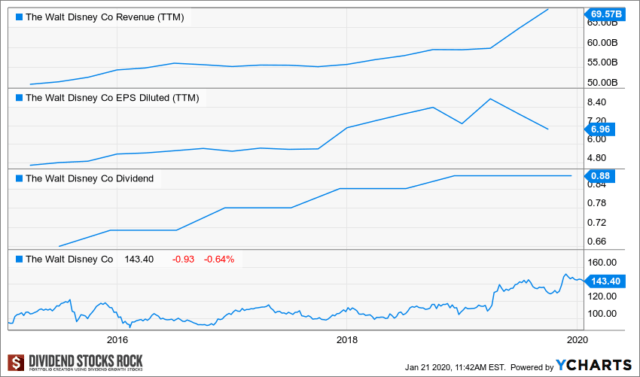 Over the past 5 years, DIS almost doubled its distribution as dividend went from $0.86 annually to $0.88 every 6 months. With a payout ratio around 20%, DIS should keep its distribution in the high single to double digits for many years. Unfortunately, management didn't increase its dividend as we expected in late 2019. The company has still lots of room to increase its payout going forward, but management may decide otherwise considering the amount of money required to market its new services. The good news is that it shows management can reward shareholders with better use of its money than dividends.

Why Disney didn't increase its dividend?

This is where investing gets so interesting: it's never black or white. Looking at those red flags (high yield, no dividend growth and weak dividend triangle) will only create an opportunity for investigation. None of them creates a screaming sell. Let's investigate Disney. The issue is quite easy to explain. First, the debt: 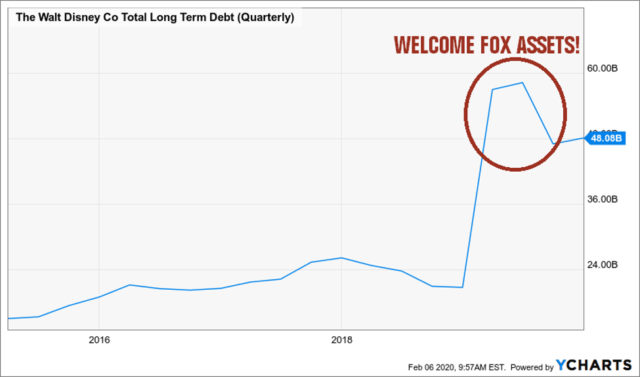 When Disney sealed the deal to purchase the Fox assets, the company disbursed $71B in the transaction. This is the kind of move that will most certainly increase its debt. Should you be worried? Let's look at past Disney transactions:

When you look at Disney's acquisition track record, you can see how each transaction has something in common: it adds content to Disney's Empire. What Disney does best is it creates multiple streams of income from its inventory of content.

The second reason why Disney didn't increase its dividend is most likely because it wants to use its cash flow to grow its streaming services. With Disney + and ESPN + positioned as potential growth vectors, the world is looking at how management will make them another success story. You can expect money to go there for a while. I'm good with that idea. Between its two new streaming services and Hulu, Disney will become a very strong challenger (2nd player) in the streaming space. As opposed to Netflix (NASDAQ:NFLX), Disney enjoys other streams of income and has an incredible track record when it comes down to producing content.

No dividend increase - keep or sell?

After reviewing the possible reasons why Disney chose not to increase its dividend for 2020, I feel comfortable keeping my shares. According to financial theory, a company must pay a dividend to shareholders when it is running out of ideas to make its money grow faster within the business. I think management has just found a way to create a lot more value for us than increasing that 1.25% yield.

Follow The Dividend Guy and get email alerts
+
Add a comment
Disagree with this article? Submit your own.
To report a factual error in this article, click here.
Your feedback matters to us!