The rally has priced the stock for perfection, attaching a rich valuation.

The stock remains a long term hold, but investors may find a better entry point at a potential pullback.

A few months ago, I wrote an article on Equinix, the data center industry leader, whose shares have since surged to new highs, substantially outperforming the market. The stock has returned investors ~16% vs. the SP500's ~10% over the last three months, as you can see in the chart below.

In my previous article, I was very bullish on Equinix (EQIX), which indeed delivered to my expectations. However, I have lately become concerned that its shares have become too expensive. The company just reported its Q4 results, once again proving its worth. The question, though remains, whether the latest results justify its current pricey valuation. 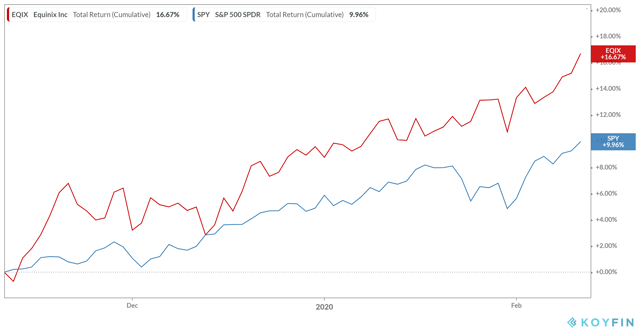 Equinix's results were overall great. Despite missing its FFO/share estimates, the company beat its top-line ones, which grew by 8/6%. The report also marks the end of the company's financial year, whose highlights I list below.

America once again represents the most stable and mature region for Equinix, with little to no growth at ~1-2% in terms of revenues. Where growth comes, is from Asia and emerging markets. The latter particularly impressed me, growing sales at 15%. While the data center space has been a growth avenue over the past few years, the REIT sub-sector has quickly matured due to economies of scale, competition, and being an easy-to-enter industry, with little barriers. Therefore a 15% growth in EMEA, which represents 30% of the company's total turnover, is a good reason to get excited.

When it comes to capital returns, the company generously increased its dividend by ~10%, or ~8% per share, considering its equity dilution. According to its FY2020 guidance, the company expects AFFO of $24.42 - $25.00 per share, an increase of 7-10%. Since the dividend is growing at about the same rate as AFFO/share, the company is able to maintain its comfortable payout ratio under 50%, as the bar chart confirms below. Since Equinix keeps reinvesting its cash for further growth, such a payout ratio is expected. However, the stock will hardly suit income investors. Despite being a REIT, which would attract retirees and income-oriented investors, the stock yields a weak ~1.6%, continuing being a growth pick, in my view.

As I mentioned before, a concern of mine regarding the stock's latest rally has been its pricey valuation. Equinix trades at twice as much its book value as the two of its most relevant competitors, at a P/B of ~6. 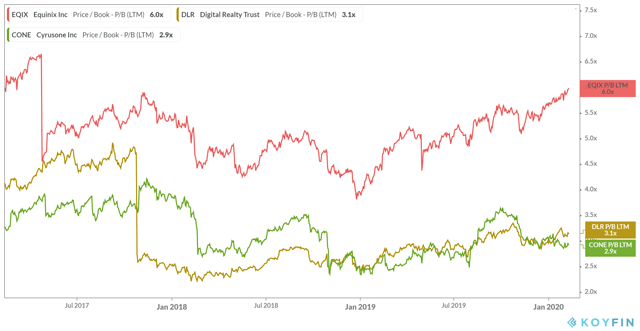 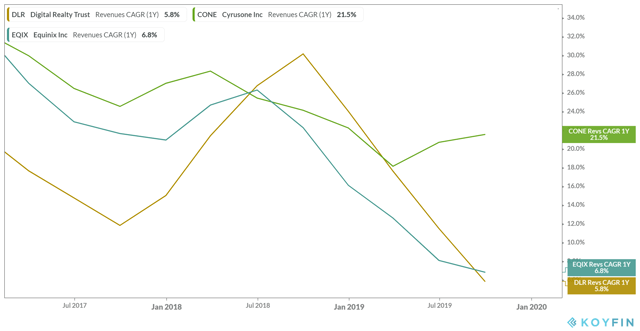 From another perspective, Equinix's P/FFO also remains rich at ~37, while both of its other two competitors have the same multiple below 20. What's more, even at the higher end of management's guidance of FFO/share of ~$25, the stock is priced today at a forward P/FFO of 25, still above its competitors. 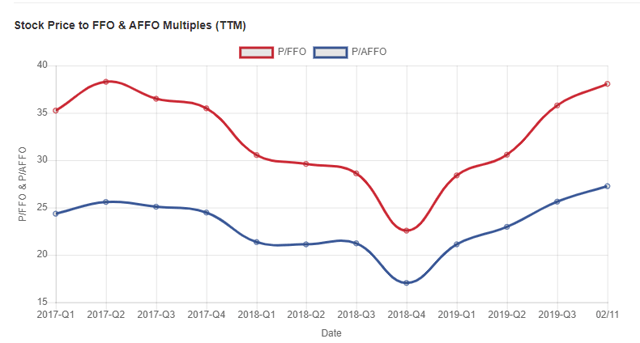 Now it's true that Equinix has many accolades to boast. The company has the world's largest Internet Exchange footprint. Its 9,700+ customers include 50%+ of Fortune 500 companies. With an average remaining lease term of >18 years, including extensions and a robust client base, Equinix has a real moat in the data center business. However, this may not be enough to justify its current share price. The stock is priced for perfection and remains relatively expensive to its competitors, even at its FY2020 estimates.

In my view, investors are taking advantage of Equinix's safety-net surplus, but that leaves little room for further upside. More than 84% of the company's recurring revenue is generated by either owned properties or properties where their lease expirations extend to 2034 and beyond. That makes for safe haven of future cash flows, whose value current investors are ideally attempting to extract.

In addition, the ongoing growth in Asia and EMEA, along with the corresponding generous dividend increases, have constituted the stock's surge to such a high valuation. As a result, I find it hard to see how investors who are planning to initiate a position now could find a significant upside. Should it rally further, the stock could become a potential sell-candidate, while if it remains flat, the weak yield fails to excite me. Therefore I find a little upside, with a moderate chance for a pullback, considering its high multiples.

Equinix is a fantastic company in the data center space. I remain bullish in the company for the long-term, despite the stock being priced for perfection. In my view, current investors should hold their shares and dollar-cost-average, should a pullback occurs. However, to those seeking to initiate a position, a pullback driven by the general market or the stock's high multiples may provide a better entry point. While Equinix is the leader in the space, its competitors also have excellent track records in terms of total returns. In the foreseeable future, I plan on doing a comparison-article to challenge where Equinix stands amongst them, so in the meantime, let me know if you have a particular stock in mind.

Follow Nikolaos Sismanis and get email alerts
+
Add a comment
Disagree with this article? Submit your own.
To report a factual error in this article, click here.
Your feedback matters to us!