With quality assets in strong markets and a solid business model for creating shareholder value, IRT's portfolio looks capable of continuing to generate strong performance in the years to come.

That being said, shares currently trade at a significant premium to NAV and the balance sheet is one of the most leveraged in the sector.

Independence Realty Trust (IRT) is a multifamily REIT that focuses on middle-market communities across non-gateway MSAs. Recently, its assets have been enjoying exceptionally strong same-store NOI growth, causing its shares to surge to a near 20% premium to net asset value. While the business model remains sound and the outlook remains positive for the foreseeable future, the fairly high leverage and the large premium to NAV makes these shares one of the less attractive options in the multifamily space at present.

IRT focuses their acquisitions on markets in the Southeast and Midwest that are leading gateway cities and at least at national averages in job and population growth. In fact, in IRT's markets there are roughly seven new jobs added annually for every unit delivered. 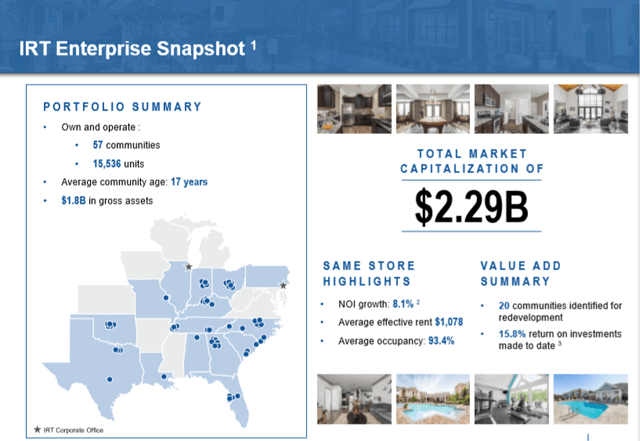 Their approach to acquisitions and operating their communities is centered on a tenant-first policy. They also use their own management platform to drive margin accretion and unlock additional value from acquisitions.

This policy was worked well, as evidenced by the greater than 15% annualized return on investment achieved across the history of the company and the greater than 30% increase in average base rent since the IPO six and a half years ago.

Beyond acquiring and operating communities effectively, IRT also boosts returns through their value add community redevelopment and capital recycling initiatives. In 2019 alone, they recycled $128.9 million into core Class B communities with value add opportunities in 20 communities. They typically achieve between a 15% and 20% return upon completion, making it well-worth their time and effort.

Clearly, the IRT business model has worked well as the company's common shares have significantly outperformed since going public:

They then add a layer of alpha on top of this through their main competitive advantage: their in-house management platform. This business services all 57 of their communities and helps them to further exploit economies of scale. They also employ an algorithmic-based revenue optimization tool, which has helped them manage costs and improve the stability of their cash flows.

For example during the last economic downturn, effective rent in IRT markets declined by less than 3% on an annualized basis at its worst point (2009), far less than the national average (~4.5%) and in Gateway markets (-5.5%) during the same time. 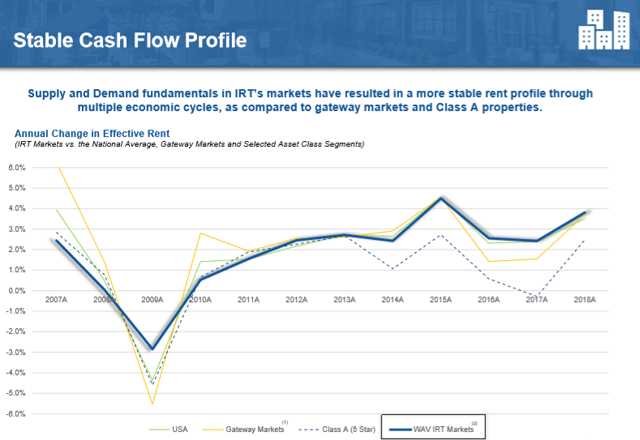 The company also benefits from the ability to react opportunistically to value-add opportunities that become available in its markets. As already mentioned, these projects typically result in 15%-20% annualized returns, making them another alpha generator for the company. Since inception, the value add program has generated a total weighted average return on investment of 15.8% across the renovation of 2,364 units.

In its most recent quarter, IRT generated stellar same-store NOI growth of 8.1%, showing just how successful their business model is currently. In addition, they enjoyed strong same-store occupancy of 93.4%.

Looking ahead, their core markets continue to enjoy a rosy outlook and this next year, IRT's FFO-per-share is expected to grow by ~7.8%.

(1) First, their leverage is towards the high end of the multifamily space spectrum. Their loan-to-value ratio is at ~43%, twice the amount of leverage that their investment grade peers carry. Their Debt-to-EBITDA ratio is a similar story. With a significant amount of debt coming due over the next half decade, it is important that they tackle this issue in order to secure strong refinancing terms and mitigate downside risk.

The good news is that management has acknowledged the issue and has laid out a plan to do so. First and foremost is their plan to reduce their leverage ratio by increasing NOI through organic growth and value add operations by 18% cumulatively over the next 3 years. They expect this will reduce their Debt-to-EBITDA ratio to the mid 7s, which - while not investment grade worthy - will at least make them much more secure against a significant economic downturn. Another positive for them is that 94% of their current debt is either fixed rate or hedged, making them pretty well insulated against interest rate volatility.

While management's plan makes sense from a numbers perspective, it is important for investors to remember that a deleveraging plan that relies solely on continued strong organic growth and value-add operations is a bit self-contradictory in that it is assuming a bull case scenario to play out in order to prepare for a bear case scenario. I would rather they focus a little bit less on continued growth and instead pay some debt down directly as well.

(2) The second major item of concern is valuation. While it is true that shareholders have enjoyed spectacular returns thus far, it isn't entirely due to fundamental outperformance. Shares currently trade at an 18% premium to NAV, trailing only BBB+ rated Mid-America Apartment Communities' (MAA) 21% premium to NAV. For a company with significant leverage concerns and good - but not best of breed - assets, this premium to NAV seems a bit excessive.

IRT has been a fantastic investment over the past several years as it has dramatically outpaced broader REIT and stock market indexes. Fundamentals remain strong and forward near term growth prospects continue to look attractive. However, leverage remains elevated despite signs of economic slowing appearing. Furthermore, the significant premium to NAV - which exceeds even that awarded to best of breed multifamily REITs such as Avalon Bay (AVB) at a 7% premium, Camden Property (CPT) at a 5.5% premium, and UDR (UDR) at an 11.2% premium - seems a bit excessive.

We think paying NAV or even a slight premium is warranted here given the track record and rosy growth outlook, but we think shares have gotten a bit stretched. As a result, we believe shares are a hold at present and favor buying high quality, investment grade multifamily REITs that are trading closer to NAV. 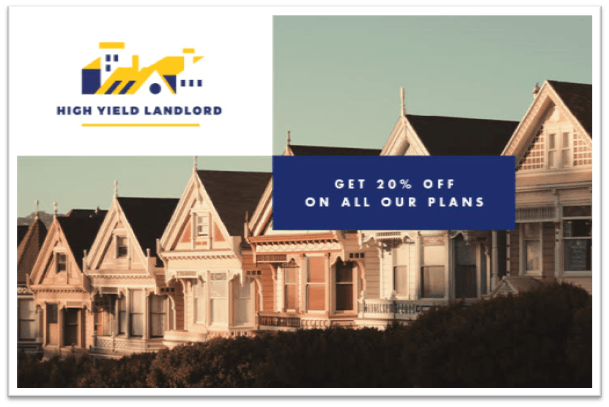 High Yield Landlord is the largest community of real estate investors on Seeking Alpha with ~1,500 members on board. We have over 170 five-star reviews from happy members who are already profiting from our 8% yielding real estate portfolio.

If you are still sitting on the sidelines, now is your time to act. We are currently running a Limited Time Sale. Start your 2-Week Free Trial TODAY and lock-in this 20% Discount!

Follow Samuel Smith and get email alerts
+
Add a comment
Disagree with this article? Submit your own.
To report a factual error in this article, click here.
Your feedback matters to us!