DRAM spot pricing has headed north for two months while contract has remained flat - until now.

The bottom is not just a narrative, it's getting ready for the magnet to pull it up.

DRAM and NAND contract pricing is what drives memory-producing companies to higher margins and also higher output volumes due to the inherent nature of higher pricing inferring to higher demand. NAND bottomed back in June, and margins have moved up for NAND-heavy producers like Western Digital (WDC). DRAM is doing the same today, showing the same signs NAND did. What's important to consider is spot pricing is a leading indicator for contract pricing and contract acts as a magnet toward it. Right now, we're in the latter stages of DRAM bottoming, in every aspect. In other words, DRAM-heavy producers like Micron (MU) are within a quarter of seeing margins and revenue rise.

Depending on the amount of activity and news flow from the DRAM and NAND market, I update subscribers to my service, Tech Cache, at least once to twice a month on the trends and the impact of memory prices.

In the last "Tracking DRAM" article I published for subscribers about a month ago, I outlined two near-term catalysts pushing DRAM spot pricing higher rapidly. At the time, the DXI was at 20,456. It had risen 15.5% at the time of the article and continued another 11.3% since then. This has been a massive move, considering DRAM has been in decline since before the summer of 2018 - at least until the most recent July move. 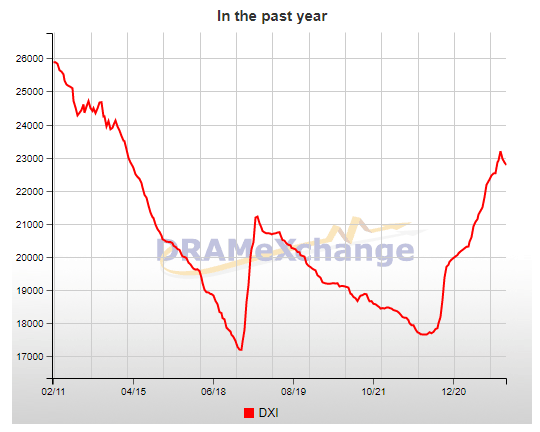 This has caused semi stocks like Micron and the Philadelphia semi index (SOXX) to rally before earnings have turned around. Semiconductor companies have called the bottom financially during the current quarter, and it's due to the increase in demand, which has caused a significant move in spot pricing. This point was reiterated in Tuesday's Goldman Sachs Technology Conference fireside chat with Micron's Chief Business Officer and CFO:

But why do spot prices matter if upwards of 90% of all business occurs on the contract market?

The simple answer is spot pricing acts as a magnet to contract prices, especially when inventory is leaner. Subscribers will recall I mentioned contract pricing had been flat but started to inch down a bit as the July spike cooled off. October saw a decline, but then December remained mostly flat as spot rounded another bottom. 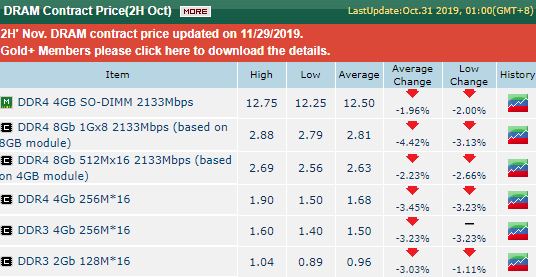 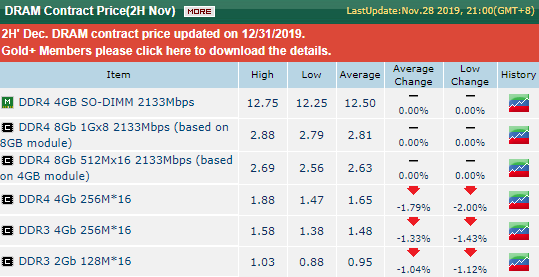 With the DXI and, more directly, spot pricing increasing by such a large amount in the last two months (as noted by the DXI chart at the beginning), it's January contract pricing I'm interested in seeing. And, to confirm the trend, February's contract pricing also.

But what's great is if you go to trendforce.com, you get a peek into January, ahead of the release set for another three weeks:

You can be sure if PC DRAM has "risen slightly," the higher demand products like server and graphics DRAM saw a rise as well - and more than likely, it's more than just "slightly" for those. So, the rise already is happening, and it's against the headwind of seasonality.

This brings us to the magnet aspect of the DRAM market. The market is only going to get tighter as the year goes on when back half demand for new consoles and smartphone refreshes come into view. Readers might be familiar with Bernstein's charts, the ones Electric Phred uses. I have to pay special regards to EP here as he kindly passed on the latest chart to me. This chart is from the Jan. 30, 2020 report. 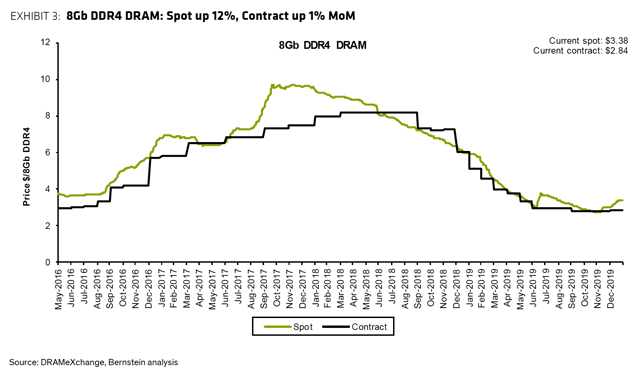 (Special thanks to Electric Phred for acquiring this chart)

At the time in August (and then September), contract pricing for 8GB DDR4 was $2.94. As of December, it has gone down to $2.81 while spot pricing has risen. Spot pricing has done a full circle over the last six months and has returned to the $3.40 area.

At any rate, contract pricing and spot pricing had diverged in the last few months of 2019. Spot pricing began to rise, but contract pricing lagged the movement - which is typical. But now, contract pricing will find its way higher and - as reported - it already has "slightly." A 3.5% increase would mean contract pricing for January is now $2.90, recovering to levels near September and forming a bottom in contract pricing. Even if it's just a 1% move, we are heading in the right direction. Additionally, there's no reason to drop further as spot has maintained a higher level.

This bodes well for companies like Micron and the other two producers, Samsung (OTC:SSNLF) and SK Hynix (OTC:HXSCF), as the price at which they sell memory will increase after a year and a half of falling. The bottom of the cycle is truly here, not based on management narratives but based on pricing and demand. This is especially true when you take into account NAND leading the way and the typical movement of DRAM and NAND to move together, albeit staggered. 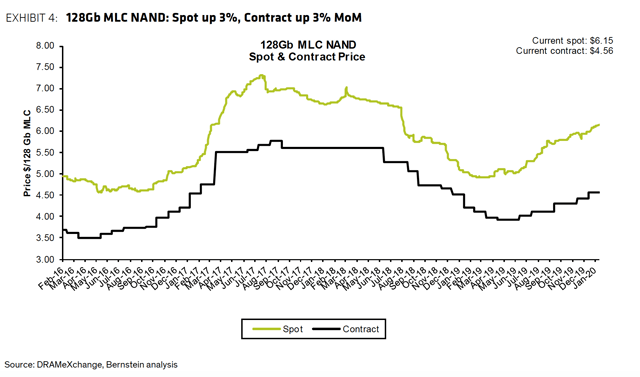 (Special thanks to Electric Phred for acquiring this chart)

It will be interesting to get the public release of January's contract prices and then to see if there's follow-through in February. If there is, expect semiconductors to continue to report upbeat guidance as earnings roll in after February. The industry analysts agree it's only going to get tighter in the supply/demand aspect of the market as the year continues. With capex cuts from semi producers taking effect and inventories back to normal levels, pricing will continue to rise the rest of the year.

Add in the potential for the latent coronavirus effects of forcing hardware manufacturers to rely on inventory to serve their customers, and we have a more firm thesis. Inventory levels may have been raised at the end of last year and the beginning of this year based on China-US trade uncertainties, but this unforeseen event will negate it and draw it down further. As the workforce heads back to work in China, customers are going to look for products to be shipped and orders to be met. Inventory is an easy way to do that.

Overall, NAND has been leading the way and exuding the magnetic effect while DRAM looks to be starting its catchup game. While slow, expect the move to be real as demand has picked up even during a seasonally weak time. Also, if there has been some China stockpiling, it won't last long. If anything, the more time that passes while spot pricing increases, the further into the seasonally strong time the market finds itself and that inventory level becomes irrelevant.

What does this mean for NAND and DRAM producers like Western Digital and Micron, you might ask? For Western Digital, the rise is still happening, and there doesn't appear to be any let-up in pricing. WDC should continue to climb as margins and revenue continue to grow because pricing is still rising. For Micron, revenue and margins are now being primed for a turn back toward growth as DRAM trails NAND's contract path.

The question, of course, is the 40% runup in Micron shares over the last six months already baking higher DRAM prices in? It depends on the rate of spot and contract ascent and the ability for producers to continue to meet demand and not oversupply demand. Right now, the less risky investment is Western Digital - but strictly relative to Micron. We know more about NAND's rate of ascent than DRAM's rate of ascent. But should DRAM follow the same pricing trajectory, Micron stands to benefit more in terms of revenue and size of profit. On a conservative basis, any pullback in either name is an opportunity. Growth appears to be ahead for the rest of this year due mostly to market demand having a positive effect on pricing.

Make Cash With My Cache

Get alerted to my tech sector analysis by clicking the follow button at the top of this page next to my name. Get further insight into DRAM and NAND pricing by joining my Seeking Alpha service Tech Cache. You also get real-time, chatroom access to ask me followup questions and hear ideas of other Tech Cache subscribers. Right now, you can try it risk-free with a 2-week free trial!

Disclosure: I am/we are long MU, WDC. I wrote this article myself, and it expresses my own opinions. I am not receiving compensation for it (other than from Seeking Alpha). I have no business relationship with any company whose stock is mentioned in this article.

Follow Joe Albano and get email alerts
+
Add a comment
Disagree with this article? Submit your own.
To report a factual error in this article, click here.
Your feedback matters to us!