I trade with 10% of my portfolio as a means largely to stay connected to the market. Otherwise, I am a buy and hold investor. The research I conducted for this article proves AT&T is a poor long-term investment. It has badly underperformed over 20 and 10 year periods, and I provide proof of my claim in this article. Aside from those that rely on income from dividend streams, and then for relatively short time frames, the stock is a manifestly poor investment.

That will likely prove true until the management and culture of AT&T changes.

Back in November, I warned SA readers that AT&T shares had likely reached a peak. Since that time, the stock is down roughly 6% (there goes the annual dividend) while the S&P has climbed nearly 5%.

Here is an excerpt from a letter Elliott sent to AT&T's board of directors:

"What has attracted our attention, as well as the attention of other shareholders - from large institutions to individual AT&T employees - has been the prolonged and substantial underperformance of AT&T as an investment relative to its potential."

AT&T's Management On How Not To Manage

DirecTV was acquired by AT&T in 2014 for $67 billion. Elliott is pressuring the company to sell off DirecTV, and management has stated it is open to the idea. However, reasonable estimates of DirecTV's current valuation stand at $50 billion or less.

Since 2014, the firm lost nearly 3.5 million DirecTV subscribers, according to a study conducted by Statista. Prior to the DirecTV acquisition, shareholders watched as the company lost $4 billion, $3 billion of which was paid to rival T-Mobile (TMUS), after backing out of a proposed merger of the two companies.

The most recent quarterly report is not reassuring. AT&T missed revenue projections by $140 million while revenues fell 2.4%. The chart below illustrates the drop in margins for HBO YoY. 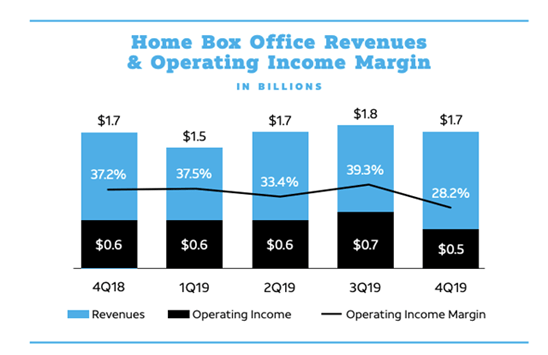 Add to that the declines in the WarnerMedia segment. AT&T lost nearly 1.2 million video subscribers in 2019. This is a story of a company that is failing in the arena that will supposedly boost revenues. 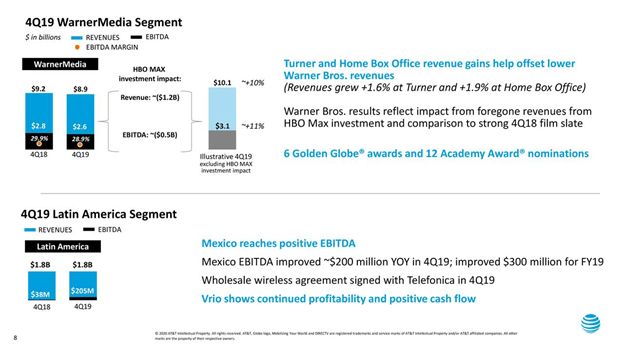 Last November, Disney (DIS) was the talk of Wall Street pundits when the company revealed Disney Plus had garnered over 10 million subscribers the day after its release. One team of analysts increased the company's five year subscriber target by 50% to 90 million.

AT&T management guides for 50 million domestic subscribers for HBO Max by 2025. Can the company hit that goal with Disney's outperformance and Apple (AAPL) entering the streaming wars?

One obstacle to the company's plan is the fact that HBO Max is generally priced above rivals' offerings.

In addition to the above, Verizon (NYSE:VZ) and Disney are offering a free year of Disney+ to Verizon's unlimited data subscribers. Will AT&T build to 50 million subscribers when competing with lower priced rivals? Will the company be forced to lower subscription rates to match competitors? 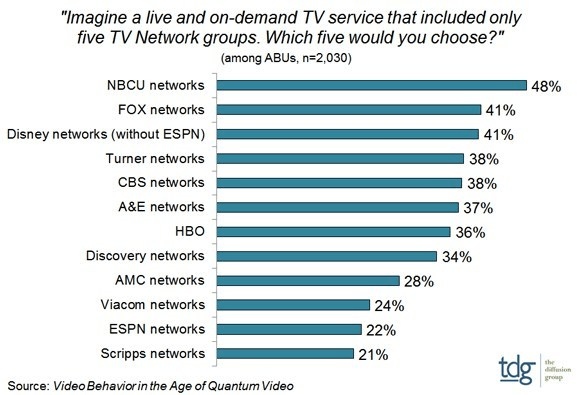 AT&T Is Losing In The Company's Key Arena

I originally invested in T due to the company's position as a premier provider of cell phone services. I consider T and VZ very safe investments due to their position in that industry. During the last three quarters of FY19, AT&T was taken to the woodshed by rivals.

In that same time period, VZ added 790,000 postpaid phone subscribers (versus 653,000 during the same period last year). Postpaid numbers are significant because those customers are much more likely to remain with the carrier. AT&T added 229,000 postpaid customers.

Another Reason I'm Not Investing In AT&T

Consider this: Since the current CEO gained the helm in 2007, AT&T's stock is down roughly a dollar a share. During that same time period, Verizon shares increased by roughly 50%, and the S&P 500 more than doubled. Verizon is the closest one can come to finding a twin for AT&T.

Management's subpar performance combined with subscriber losses and fierce competition steers me away from AT&T.

Still Not Convinced? A Lesson For The Yield Hungry

It is a simple task to point to a FANG stock to provide a tough comparison for AT&T shareholders. What if we turn to a mundane seller of everyday commodities? Let's try something as lowly as Spam.

"More money has been lost reaching for yield than at the point of a gun." - Raymond DeVoe Jr.

Perhaps you believe I cherry picked time frames and companies. OK, let's try a different time frame and a company occupying a space that doesn't include mind dazzling tech offerings.

Exactly ten years before I typed these words, AT&T stock sold for roughly $25 per share.

Ten years ago, AT&T shareholders received a quarterly dividend of $0.42 a share.

In the same time period, T shares are up a bit over 50% and Lowe's shares have roughly quintupled, and Lowe's dividend now surpasses AT&T's.

There are those who claim HBO Max will propel the shares to new heights. Well, maybe, but I'm not convinced. As outlined above, AT&T has a history of underperformance. Furthermore, the company is touting HBO Max as a major growth driver.

Will AT&T management finally rise above the competition with HBO Max? Will that drive AT&T above $40 a share?

Only time and the market can answer those questions. Meanwhile, it behooves those invested in the firm to keep a close eye on this company, especially developments related to HBO Max.

There are positives in the AT&T story. AT&T is a Dividend Aristocrat, and historically Dividend Aristocrats outperform the broader market. The company operates in an oligopoly, has a safe dividend and a yield that serves those seeking a reliable source of income. The company is making inroads to pay down debt, and the company's debt is rated investment grade, albeit two notches above junk. Through fiscal year 2019, EPS and revenues both increased by 1.4%.

Nevertheless, the company has a long history of underperforming the market. I do not believe long-term investors should sell their shares, nor do I believe the company is in an existential crisis. My position is that there are better investments. Furthermore, the future for the company is opaque. I seek investments with a clear future and sound management.

I hope to continue providing articles without cost to SA readers. If you found this article of value, I would greatly appreciate your following me (above near the title) and/or pressing "Like this article" just below. This will aid me greatly in continuing to write for SA. Best of luck in your investing endeavors.

Follow Chuck Walston and get email alerts
+
Add a comment
Disagree with this article? Submit your own.
To report a factual error in this article, click here.
Your feedback matters to us!