Over the last week, market observers have highlighted risks ranging from the coronavirus outbreak to fiscal and monetary conditions.

Despite those risks, the S&P 500 has traded near all-time highs. That can be an opportune time to inexpensively hedge.

For readers looking to add protection to their own portfolios, I show a simple way of doing so using optimal put options on SPY. 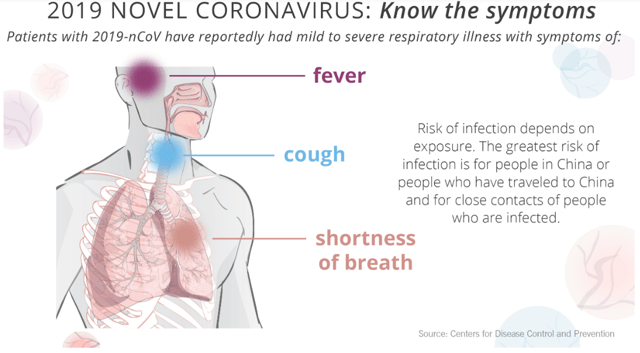 The CDC warns of coronavirus symptoms (image via Share America). Knock-on effects of coronavirus on supply chains and consumer demand in affected countries are a current market risk.

Sunny With A Chance Of A Rain

Those of you who've been to Manhattan when it's raining will be familiar with the sight of people selling umbrellas on the street. You generally don't get the best prices on umbrellas on that situation - you're better off buying one in a store when it's sunny out and having it with you when it starts raining. Hedging the market when it's trading near all-time highs is somewhat analogous: it tends to be cheaper. That's especially true when you use optimal, or least expensive, hedges, given your risk tolerance. I'll walk through a way of protecting your portfolio with optimal puts on the SPDR S&P 500 ETF (NYSEARCA:SPY) below, but first, let's address the chance of "rain" in our metaphor: risks that could lead to a market correction.

The first risk that comes to mind is the recent coronavirus outbreak. Seeking Alpha CEO Eli Hoffman, moonlighting as an SA news editor, offers the latest grim updates here: China changed its way of tabulating coronavirus cases, and as a result, it has nearly 15,000 additional cases. And on his blog, physicist and anthropologist Gregory Cochran cautions against facile comparisons of the coronavirus to the flu:

I've seen people compare the new coronavirus to influenza. Some have said that we should worry more about the flu, since it kills every year (maybe 10,000 in the US last year). They are mistaken. The danger in this case is not entirely clear, but on the high end, we're talking big trouble, way bigger than current influenza strains.

Current flu strains seem much less severe than this new coronavirus, much less likely to put you in intensive care or kill you. Fewer people are susceptible to the flu: we have a vaccine, and most people already have some degree of immunity from vaccination and past bouts with the flu. We have somewhat useful antiviral drugs for the flu.

Professor Cochran goes on to note that, unlike the flu, we currently have no vaccine for coronavirus; nor do we have antiviral drugs proven to work against it.

A second risk relates to monetary and fiscal conditions, as noted by Seeking Alpha contributor Stuart Allsopp last week ("Monetary And Fiscal Stimulus Will Not Prevent A Market Crash"). Allsopp's article is worth reading in full, if only for the variant view (my system is currently bullish on SPY), but in the interest of expanding the discussion, I'd like to gently push back on one aspect of it here. Allsopp warns that,

[I]f massive fiscal deficits are seen to be non-permanent there is no reason to assume they should support profitability over the long term.

It's not clear that massive fiscal deficits should be seen as non-permanent. In fact, Modern Monetary Theory suggests they should be seen as permanent. For those unfamiliar with the theory, FT Alphaville's Brendan Greeley offered a concise summary of it last year:

Advocates for modern monetary theory argue that, for a sovereign country with its own currency, there is no inherently unacceptable level of government debt - that country does not automatically begin to collapse when debt reaches 90 per cent of GDP, or even 200 per cent of GDP. The country appropriates what it believes is necessary for domestic programs, regardless of revenue.

A traditionalist would see this as a prescription for inflation: increase the supply of money and, as with any commodity, you reduce its value. Modern monetary theorists argue that inflation happens only when the real economy - plants, machines, workers - can't absorb what the government is spending. So: disconnect spending from taxation. Spend until the economy is at capacity, using all of its resources perfectly. Raise taxes only to cool down inflation, when the real economy exceeds that capacity.

In my view, there are two reasons why investors ought to familiarize themselves with Modern Monetary Theory. The first is that it seems to describe reality fairly well. Greeley presumably was alluding to Japan when he mentioned debt at 200% of GDP, and yet estimates suggest Japan's inflation rate will be below 1% this year. The second reason investors ought to familiarize themselves with the theory is that one of the leading exponents of it, Stony Brook University Professor of Economics Stephanie Kelton, is advising leading Democratic presidential primary candidate Senator Bernie Sanders.

With that said, I could be wrong, and Allsopp's warning of a market crash could be prescient. In the event it is, let's look at a way of protecting yourself.

Here's a simple way of protecting a stock portfolio against market risk using optimal, or least expensive, puts on SPY. For the purposes of this example, I'll assume your portfolio is worth $500,000, that it's closely correlated with SPY, that you have enough diversification within it to protect against stock-specific risk, and that you can tolerate a decline of up to 20% over the next few months (if you have a smaller risk tolerance, you can use the same approach entering a smaller decline threshold; similarly, if you have a larger or smaller portfolio, you can adjust Step 1 accordingly).

Scan for the optimal, or least expensive, puts to protect against a >20% decline in 1,482 shares of SPY over your desired time frame (the screen captures below are via a hedging app, but you'd like to do this manually, I described that process here). I normally use a time frame of about six months, but I've used time frames closer to two months this time, as the annualized cost of them is currently lower. 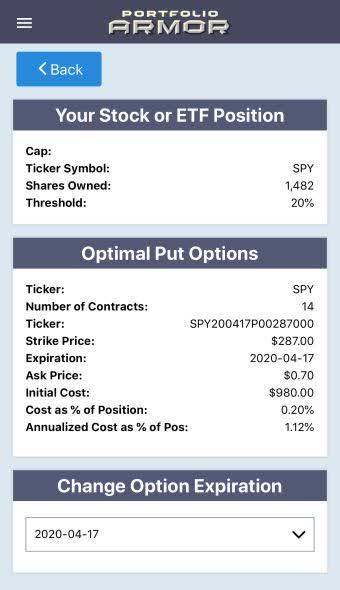 Note the cost here: $980, or 0.2% of portfolio value, which was calculated conservatively, using the ask price of the puts (in practice, you can often buy options at some price between the bid and ask prices). That worked out to an annualized cost as a percentage of portfolio value of 1.12%.

Round up the number of SPY shares to the nearest 100 and repeat step 2. 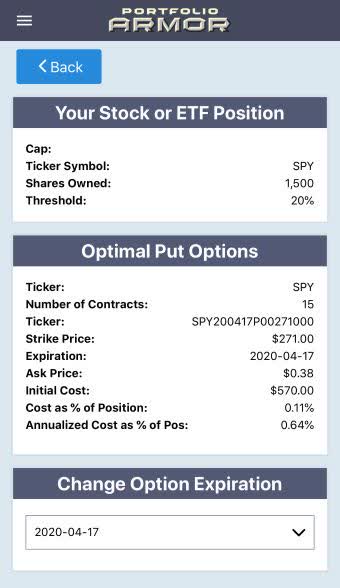 Wrapping Up: A Drawback Of This Approach

Recall that in the second, less expensive, example, the annualized cost is 0.64%. A drawback of this approach is that this cost will act as a drag on your portfolio's returns if the market keeps going up. If your portfolio is closely correlated with SPY, you can expect to lag it by approximately 0.64% over the next 12 months, assuming the market goes up over that time frame, you add new hedges of similar time to expiration just before these expire, and the cost is similar to what you paid here.

This article described a way to hedge against market risk using puts on SPY, and noted that your returns in an up market will lag SPY by your cost of hedging. To beat SPY in an up market while hedging, you need to own names that can outperform SPY. The top ten names I have presented in my Marketplace service each week since June of 2017 have outperformed SPY by 1.64% annualized so far, and can all be hedged in the same way I hedged SPY above. You can sign up for a free two-week trial to the service here.