OPEC's revised estimate for the demand for its oil has dropped to 29.3 million barrels per day for 2020.

But much depends on the depth and length of both the Libyan oil disruption and the coronavirus impact on demand.

It's too early to have a fix on either.

OPEC's projection for the demand for its oil in 2020 rests on a global demand increase of 910,000 b/d, which it revised down by 230,000 b/d due to the coronavirus in China and its impact on oil demand there.

With estimates of the current impact on demand as reported by the Financial Times, executives at China's largest refineries expect that the country's oil consumption could fall by 25% this month, equivalent to a staggering 3.2 million b/d. Other disruption estimates are discussed in my oil article, which places estimates between two and three million barrels per day for the most part.

OPEC is projecting that non-OPEC liquids production (crude plus NGLs) will rise by 2.25 million barrels per day in 2020. The drivers of growth and declines are specified in the charts below. 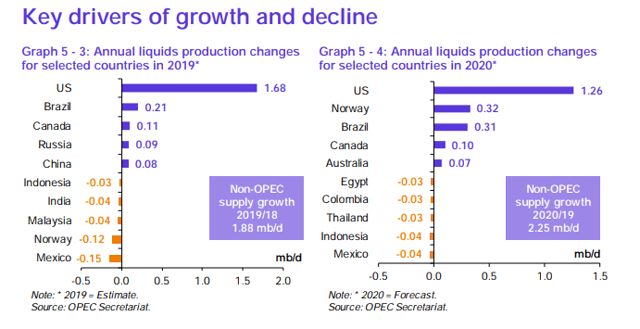 OPEC's Joint Technical Committee has proposed that the OPEC+ group cut an additional 600,000 b/d from the quotas decided in December. Russia is reportedly still considering the measure.

OPEC production fell by 509,000 b/d in January to average 28.859 million barrels per day. (Note: the total includes Ecuador, which cancelled its membership effective January 1st.) The largest decline was in Libya, which fell 344,000 b/d to 796,000 b/d due to internal conflicts. With the lower Libyan output now at 180,000 b/d, OPEC production would drop to 28.243 million if it stays there, all else equal. 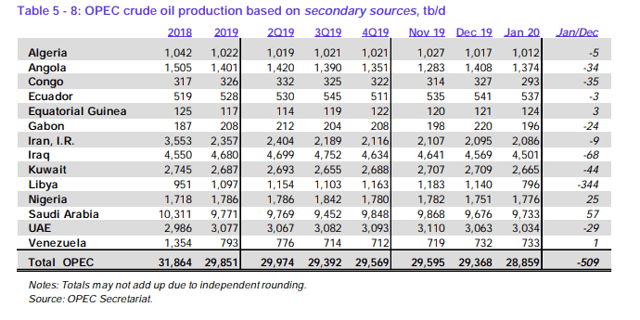 That level is approximately OPEC's demand projection for 2Q20 (28.290) if Libyan production stays low until the end of the second quarter. But if Libyan oil returns to 1.1 million, OPEC production would average 29.163, nearly 900,000 b/d higher than 2Q20 demand. And thus, the additional 600,000 b/d cut they are discussing now would largely close the gap, but there would still be some excess supply.

I agree with the assessment by Gibson Shipbrokers that "there are plenty of unknowns, most critically how long the outbreak will last and how far it will spread. Without a doubt, the longer the duration, the bigger the implications are. For now, we are not even close to approaching the end of this epidemic."