I would expect Brookfield to be able to pay more than $12. The implied EV/EBITDA of the deal is below. In my opinion, this is the beginning of the story.

The implied EV/EBITDA of the deal is below 7x EBITDA. A few years ago, the shares traded at 10x EBITDA.

After the announcement of the deal with Brookfield Infrastructure, another fund offered $12.00 per share in cash. In my view, Cincinnati is a buy.

Cincinnati Bell Inc. (CBB) signed a $10.5 deal with Brookfield Infrastructure Partners L.P. (BIP). The implied EV/EBITDA of the deal is below 7x EBITDA, which I believe is a low ball. Very recently, another infrastructure fund offered $12 for the company. I still believe that we will see new bids. In my opinion, there is a significant upside in the stock price. Additionally, with two bidders, we could see a bidding war. Smart money managers are betting on the company.

The company’s long term goal is transforming its business from a legacy copper-based telecommunications company into a tech corporation with state-of-the-art fiber assets. Right now, Entertainment represents 60%-64% of the total amount of revenue, and IT Services comprise of 40%-35% of the total amount of revenue. As shown in the chart below, revenue from Entertainment is increasing: 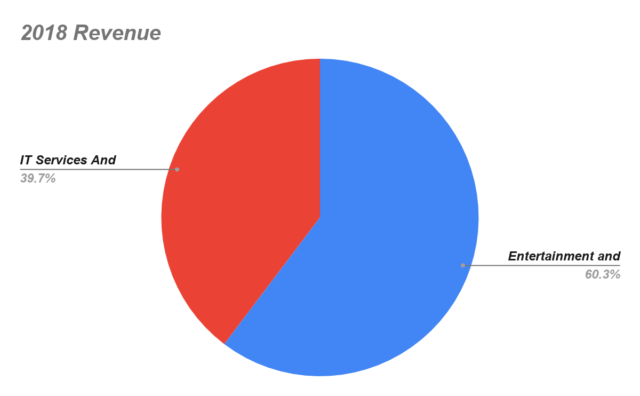 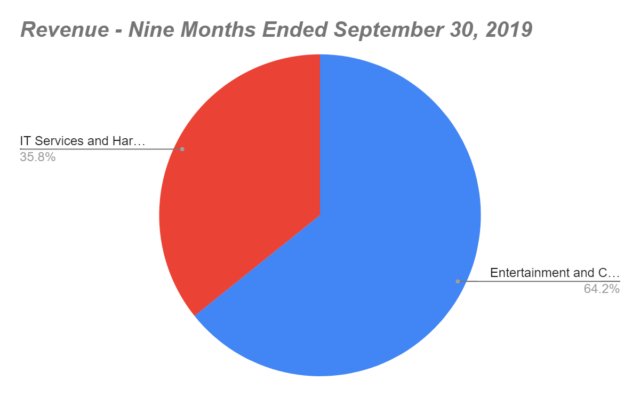 The company may be acquired by Brookfield Infrastructure Partners. Thus, I researched whether the company has expertise in the M&A markets. Cincinnati Bell is an old corporation, which has gone through several corporate transactions. Readers may remember the acquisition of IXC Communications, which occurred in the 1990s. Most recently, in 2018 and 2017, the company acquired Hawaiian Telcom Holdco, Inc., SunTel Services LLC, and OnX Holdings LLC. As a result, in my opinion, Cincinnati’s employees understand what an acquisition is. It will help during the merger integration.

I believe that investors would appreciate understanding what Brookfield Infrastructure Partners is buying. As of September 30, 2019, the amount of cash in hand is not significant. The company’s most valuable assets are its PP&E, which is worth $1.796 billion, and goodwill and intangibles valued at $317 million:

Most of the PP&E consists of network equipment. Before taking into account D&A, network equipment comprised of 85% of the total gross PP&E. Taking into account this fact, I would not expect financial buyers to be very interested in CBB. The company does not own buildings or any other asset, which can be sold. Cincinnati Bell Inc. may be targeted by other players in the industry, which understand the company’s business model and may present cost synergies.

The company’s acquisitions in 2018 and 2017 as well as the investments in the expansion of high-speed internet and video products pushed the EBITDA up. As shown in the plot below, from 2017 to 2020, the market is expecting EBITDA growth of 36%. I don’t think many companies founded more than 100 years ago can report the same growth. It is a pity, in my view, that retail investors may not profit from it when CBB gets bought out: 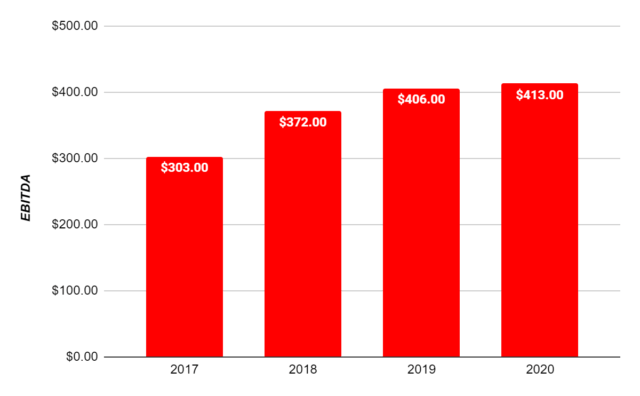 In my opinion, Brookfield Infrastructure Partners is about to buy the company at the best point in time. Right now, the company’s strategy is working properly, and the most recent acquisitions seemed succesful. I hope that shareholders and the Board of Directors will obtain a good price for the company’s shares.

As of September 30, 2019, the company’s balance sheet includes $1.904 billion in long-term debt and $220 million in pension and post retirement benefit obligations. Taking into account total liabilities of $2.746 billion, the company’s debt appears very significant. With that, the company’s Debt/EBITDA level is in line with other competitors. Thus, I am not that worried about the company’s financial risk: 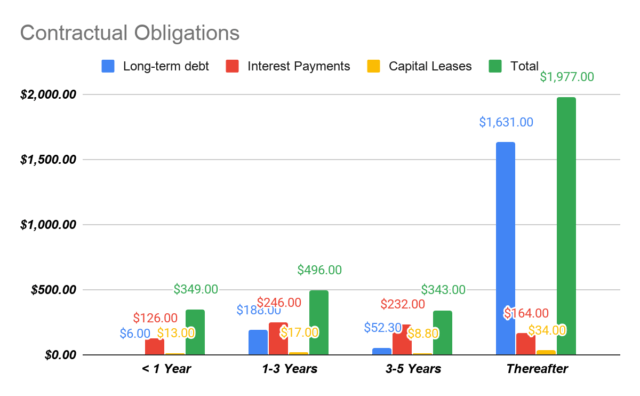 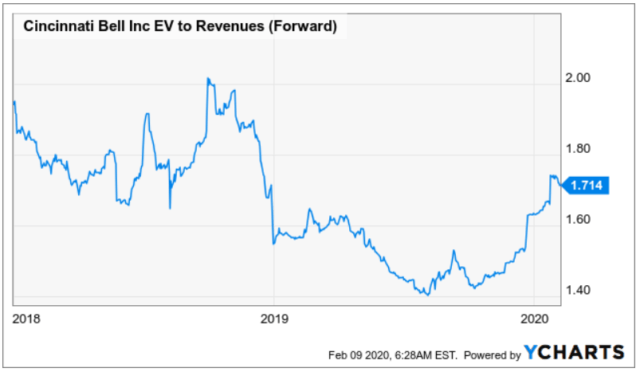 I did not see any condition that is very difficult to meet. It’s very relevant. In my view, with this merger agreement, other buyers would be interested in signing a new deal:

The break up fee is also low, equal to $17.97 million. If the company’s enterprise value is close to $2.5 billion, a termination fee of $17.97 million is not significant. In the light of this fact, in my opinion, buyers will not mind paying the break up fee. I saw several seeking alpha users giving, by mistake, misleading information about the breakup fee. Thus, I believe that I am doing good by pointing it out in the article:

With the exception of the termination fee of $17.97 million to be paid by the Company to Parent under certain circumstances, all fees and expenses incurred in connection with the merger and the other transactions contemplated by the merger agreement will be paid by the party incurring such fees and expenses, whether or not such transactions are completed. Source: Merger Agreement

Most institutional investors don’t care about what other institutions do. Having said that, I do like checking who bought shares. In this particular case, I could identify two well-known smart money managers among the shareholders. Check the table below for more details on the matter:

The $12.0 Non-binding Proposal And The Market Reaction

After the announcement of the deal with Brookfield Infrastructure, another fund offered $12.00 per share in cash:

Cincinnati Bell Inc. today announced that on January 22, 2020 it received a non-binding proposal from an infrastructure fund (the “Fund”) to acquire all of the outstanding shares of common stock of Cincinnati Bell for $12.00 per share in cash Source: Press Release

Investors did not care about the fact that the new bid is non-binding. The market reacted by pushing up the share price from $10 to more than $12. Clearly, many investors believe that Cincinnati Bell Inc. is worth more than $10. I do agree with the market’s vision: 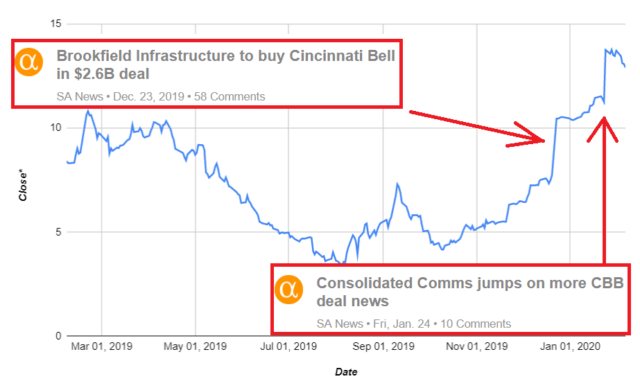 Let’s take a look at the valuation of other competitors. They trade at a median of 8.24x EBITDA with an EBITDA margin of 23%-132%: 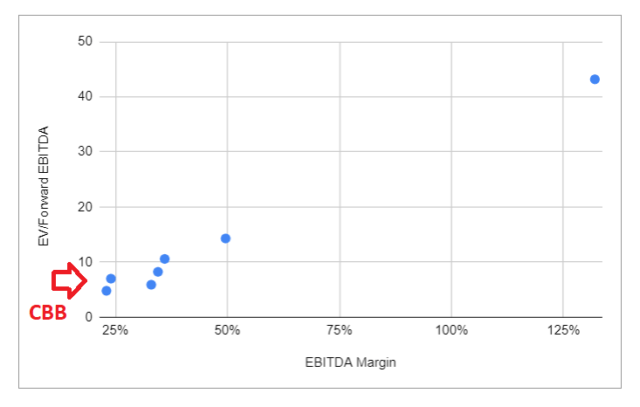 Source: Ycharts (Does Not Include The Control Premium)

Don’t you believe that the company could trade at 8.5x EBITDA? Have a look at the plot below. In 2000, the company traded at 30x EBITDA. Besides, a few years ago, the shares traded at 10x EBITDA: 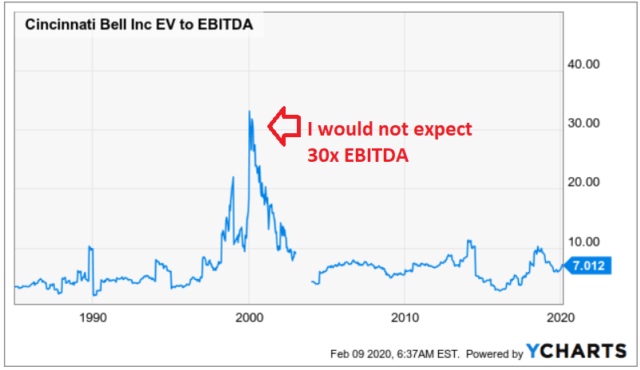 The company has two clients, which represent a significant amount of Cincinnati’s sales. Investors should understand that losing these clients will result in a significant sales decline:

As of December 31, 2018 Verizon comprised 18% of consolidated accounts receivable. As of December 31, 2017, GE comprised 10% of consolidated accounts receivable. During 2016, GE contributed 11% to consolidated revenue. As a result of these concentrations, the Company's results of operations and financial condition could be materially affected if the Company lost these customers or if services purchased were significantly reduced. Source: 10-k

The company represents an interesting buying opportunity. Brookfield Infrastructure Partners offered $10.50 in cash. Thus, if the other buyer does not pay $12, the share price would decline back to $10.5. As a result, investors would suffer a loss of 12%-15%. In my opinion, the loss is limited, which most investors would appreciate.

In my opinion, $10.5 per share is a low ball for Cincinnati. Clearly, the infrastructure fund, which offered $12 per share, understood it. Brookfield Infrastructure Partners L.P. reports a revenue of more than $3.5 billion. Thus, I would expect Brookfield to be able to pay more than $12. In my opinion, this is the beginning of the story. There is a significant upside potential in the stock price and limited downside. In my view, Cincinnati is a buy.

Follow Wang Financial Research and get email alerts
+
Add a comment
Disagree with this article? Submit your own.
To report a factual error in this article, click here.
Your feedback matters to us!