Tata Motors has been adversely affected by slow sales in China, by a decline in demand for diesel, and by Brexit.

Despite improvements, these factors have not abated.

Tata Motors (TTM) has had a brutal year, and while it appears to be over the very worst of it, there are ongoing issues. Although the share price has risen by 29.91% from its rock-bottom 52-week low of $7.38, and this Indian automotive firm still appears to be significantly undervalued at the moment, I am not inclined to recommend it as a prospective investment.

2019 started off badly for Tata Motors, and particularly for its British subsidiary, Jaguar Land Rover. Slow sales in China, a decline in the demand for diesel and Brexit all contributed to hurting the parent firm's bottom line - contrast the 2019 net income figures with the preceding four years' figures.

The 2020 financial year initially seemed to be a disastrous one as well, with Jaguar Land Rover reporting a pre-tax loss that adversely affected the Q1 2020 results - and the share price also plummeted to $7.38, as noted above. However, while the overall financial year is far from stellar at present in terms of net income, there has been an improvement in Q2 and Q3.

This improvement can be traced to several factors. Q2 results benefited from an improvement in Jaguar Land Rover's performance, and the share price appreciated in consequence. Investor confidence is also buoyed by Tata Motors partnering with Lithium Urban Technologies, the largest provider of electric cars operating in India. That Tata Motors intends to carve a larger slice of the electric vehicle market was confirmed by its announcement of the Tigor EV, an electric car for regular drivers. These factors account for Tata Motors' improved performance overall, and the projected earnings per share growth of 6.90% over the next five years suggests confidence that this performance will continue to improve in a solid, if unspectacular, fashion. 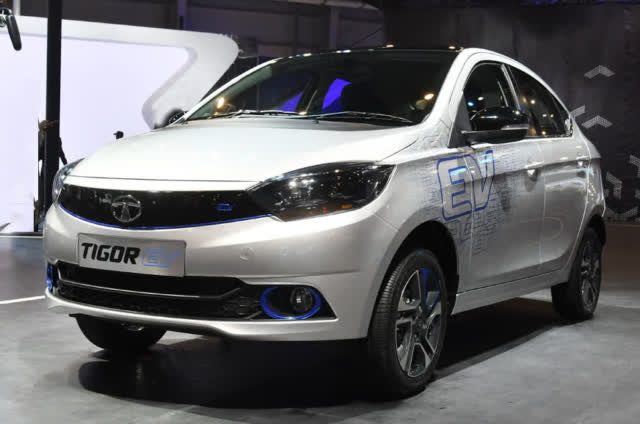 The Tigor EV will play a part in Tata Motors' plan to carve a slice of the EV market. Image provided by Autocar India.

That is not to say that there are no clouds on the horizon, however. In January, Tata Motors signalled that the ongoing coronavirus epidemic will likely have an adverse affect on profits, as extensive travel restrictions on Chinese factory workers could hinder production of Jaguars and Land Rovers. Another issue - that of falling retail sales - is one which a Jaguar Land Rover spokesperson explicitly stated was not linked to the coronavirus epidemic but to issues that have bedevilled Jaguar Land Rover throughout - namely, slow Chinese sales and declining demand in diesel. This issue has prompted the subsidiary to reduce or cease production in late February and March at two of its British factories, Castle Bromwich and Solihull, to cut costs. A third factory, Halewood, will cut 10% of its workforce in response to the same issue.

Such cost-cutting measures will hopefully aid Tata Motors' balance sheet, as the long-term debt of ₹739.2 billion ($10.37 billion) outweighs the firm's net worth of ₹530 billion ($7.43 billion). Short-term finances are in better shape, with total current liabilities of ₹1.41 trillion ($19.8 billion) offset by total current assets of ₹1.1 trillion ($15.4 billion), cash-on-hand worth ₹278.86 billion ($3.91 billion), short-term investments worth ₹61.82 billion ($870 million) and total accounts receivable of ₹249.22 billion ($3.49 billion). However, while revenues remain consistent, Tata Motors can ill-afford any more losses of the kind it has been hit with over the past year, and the issues which have caused these losses have not abated.

Currently, Tata Motors' supported ADR is trading on the New York Stock Exchange at a share price of $12.01. As earnings per share (trailing twelve months) is $1.94, it currently has a price-to-earnings ratio of 6.19, which is significantly less than its own five-year average P/E of 14.12, less than the 30.87 average for the transportation equipment manufacturing sub-sector and also less than the S&P 500 (SPY) average of 25.18.

Figures collated from Morningstar and The Street

Despite this apparent undervaluation, however, the sales growth issues in China and the drop in diesel demand are factors that are still in play, as well as Jaguar Land Rover's cost-cutting measures, portend further losses may well be on the way here - and Brexit and the ongoing coronavirus epidemic make such losses more likely. Consequently, Tata Motors looks more like a value trap at present rather than a value opportunity.

Follow Cash-Centered Creep and get email alerts
+
Add a comment
Disagree with this article? Submit your own.
To report a factual error in this article, click here.
Your feedback matters to us!