A major plank of the economic argument to remain in the EU was that the U.K.'s highly integrated supply chains with the EU for industries like automotive and aerospace would be catastrophically impacted by the imposition of tariffs if the U.K. left the single market.

Important as automotive production is for the U.K., the country is a net importer of new cars.

A recent Financial Times article offers up the prospect that, at least for some manufacturers, an alternative outcome could be that they double up on cars produced in the U.K. as imported cars become less economically attractive.

One of U.S. President Donald Trump's objectives when applying high import tariffs to steel, aluminum and, now, downstream products was to support domestic producers by making it economically more attractive to produce locally than to import.

An unexpected, or at least unintended, side effect of Britain's decision to leave the U.K., or Brexit, could be something similar for the U.K. car industry.

A major plank of the economic argument to remain in the EU was that the U.K.'s highly integrated supply chains with its nearest neighbor for industries like automotive and aerospace would be catastrophically impacted by the imposition of tariffs between the U.K. and the EU if the U.K. left the single market.

But a recent Financial Times article offers up the prospect that, at least for some manufacturers, an alternative outcome could be that they double up on cars produced in the U.K. as imported cars become less economically attractive.

The Financial Times points out more than 1 million brand-new cars leave Britain every year, bound for Europe and the rest of the world; however, for each one that departs, two arrive.

Important as automotive production is for the U.K., the country is a net importer of new cars. But under WTO rules - the worst-case scenario, should the U.K. fail to reach an agreement with the EU on a free trade agreement by the end of this year - 10% import tariffs would apply on imported cars into the U.K. and for imported U.K. cars into the EU, but only 2.5% on car parts.

So, supply chains may feasibly survive but finished cars could suffer.

The U.K. could become more like the U.S. or China, the Financial Times speculates (the U.S. imports just half its vehicles, while China imports a paltry 5%). But both enjoy massive economies of scale, consuming some 40 million cars between them, compared to just 2.3 million in the U.K. 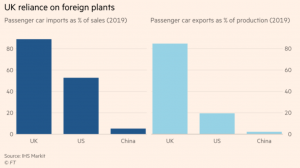 The holy grail for carmakers is volume, meaning producing just one or two models in a plant in large quantities for sale in multiple markets.

Considerable progress has been made recently in producing multiple models from the same plant, provided they are all based on a standardized wheelbase tray or platform, the Financial Times reports.

Vauxhall, owned by French group PSA (OTCPK:PEUGF), has dozens of models across its Peugeot, Citroën, Opel, Vauxhall and DS brands, but they are all produced from just two platforms.

Currently, Vauxhall makes the Astra at its Ellesmere Port plant, but feasibly could produce the popular Peugeot 308 and Citroën C5 Aircross models, too.

Nissan (OTCPK:NSANY) was one of the firms lobbying the government of Theresa May the hardest after the original referendum to leave, worried that Britain quitting the EU could undermine the case for its massive Sunderland site - which is larger than Toyota (TTM), Vauxhall and Mini's plants combined. 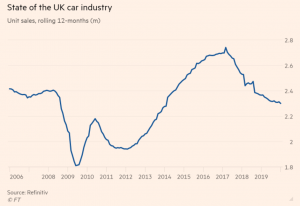 According to the Financial Times, Nissan's contingency plan for post-Brexit tariffs include ramping up sales to as high as 20% of the U.K. market, which would equal 400,000 cars. Nissan believes that would be enough to sustain the site's future.

BMW (OTCPK:BMWYY) faces a similar conundrum at its plant outside Oxford, the article reports. Combined British sales of the Mini, the BMW 1 Series, and the X1 compact SUV, which all sit on the same platform and could be made at the site, last year were 108,000 - less than half the 222,000 Mini vehicles made by the site currently, many of which are currently exported.

The toughest challenge is on the cheapest or smallest cars, where margins are already razor-thin; even the U.S. has the Fiesta (F) made in Mexico to achieve the cost structure to make it viable.

Nor will Europe's supply chains emerge unscathed in the event of tariffs, as the economic impact of border delays and additional tariffs costs changes the economics of automotive production on both sides of the English channel.

Follow MetalMiner and get email alerts
+
Add a comment
Disagree with this article? Submit your own.
To report a factual error in this article, click here.
Your feedback matters to us!