Guidance in-line with expectations down meaningfully.

Dividend raised by a penny.

Over the last year, US markets have raced to new all-time highs, with another record set on Wednesday. Most large cap technology names have done quite well, but there is one notable laggard. I'm talking about networking giant Cisco Systems (CSCO), which as the chart below shows has greatly underperformed the NASDAQ index. Unfortunately, the latest earnings report wasn't exactly a home run, meaning the name is likely stuck in the mud for now.

After the closing bell on Wednesday, Cisco reported its fiscal second quarter results for the period ending January 25th, 2020. Revenues of just over $12 billion were down 4% over the prior year period, but they beat wall street estimates by a small margin. Non-GAAP EPS of $0.77 were up 5% and came in a penny ahead of the street.

To see Cisco beating the street isn't a surprise. As its earnings history page shows, the company has basically beat on the top and bottom lines every quarter since 2015. Additionally, it's not hard to beat when you lower the expectations bar quite significantly, as I detailed a few months ago at the company's disappointing Q1 report:

Management is calling for a 3% to 5% decline for fiscal Q2 revenues, which is a major surprise. The street was actually looking for a revenue increase of more than 2.5%, so not only is the decline a surprise, but the magnitude is quite dramatic when compared to estimates. Non-GAAP EPS guidance of $0.75 to $0.77 was also a bit below the $0.79 average estimate.

As a result of that weak guidance, analysts took down their estimates for a number of future periods, including the one we are currently in. Since the end of October 2019, the average street revenue estimate for fiscal Q3 has dropped by about $650 million. Going into Wednesday's report, that put the average at $12.62 billion, or a decline of about 2.6%. Non-GAAP earnings per share estimates saw a similar trend, going from $0.84 to $0.80 over that time. Thus, the following Q3 guidance was only in-line with expectations this week.

Cisco's February earnings report also has been a time for a major capital return update. The company announced that the quarterly dividend was raised by a penny to $0.36 per share per quarter. That's a less than 3% raise, following a two cent increase last year. Before that, the dividend had been raised by double digits, percentage wise, each year since it had been started back in 2011. The chart below shows the raised dividend amount by calendar year, so for example 2020 represents the new $0.36 payout level. 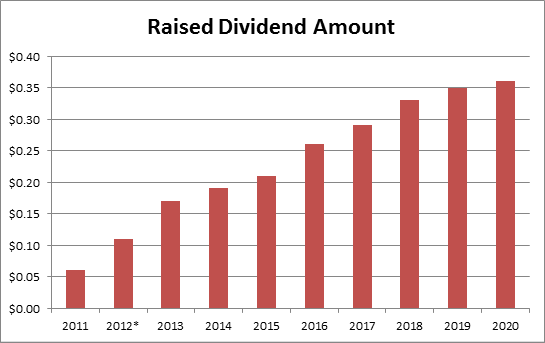 (Source: Cisco dividend history, seen here. *Dividend average, as first two quarters were paid out at $0.08 per share and last two were at $0.14.)

There are likely some investors disappointed with just a penny increase. In fact, total dividend payments seen in the cash flow statement are basically flat over the prior year period. With the company's buyback program having reduced the share count meaningfully in the prior fiscal year, the amount of cash funneled to the dividend has basically flatlined. In the current fiscal year, buybacks have also dropped, although that's more a function of previous years that saw repurchases well above free cash flow levels. In fiscal 2019, which ended last July, total dividends were under $6 billion, less than half of the roughly $15 billion free cash flow figure.

The problem with Cisco right now is there isn't a major catalyst to get this stock going in a meaningful way. Revenues are declining and most earnings per share growth is due to the buyback. The dividend is nice at nearly 3% annually, but that's not a major reason to own the stock. Investors favor growth names right now, and that leaves Cisco looking for an invite to the party. When you include Wednesday's after-hours decline, the stock is basically flat over the past year. Until the company's results really start to improve, the stock seems likely to continue lagging.

Follow Bill Maurer and get email alerts
+
Add a comment
Disagree with this article? Submit your own.
To report a factual error in this article, click here.
Your feedback matters to us!