Apple's recent meteoric rise has left many wondering if they should hop aboard as it rockets upwards.

I demonstrate what return you can expect from buying Apple at this price and why buying here will likely lead to underperformance of the SPY.

With services and wearables growing at healthy rates, Apple has once again restored investor confidence, as evidenced by their ~25x price to free cash flow, but that doesn't mean buy. 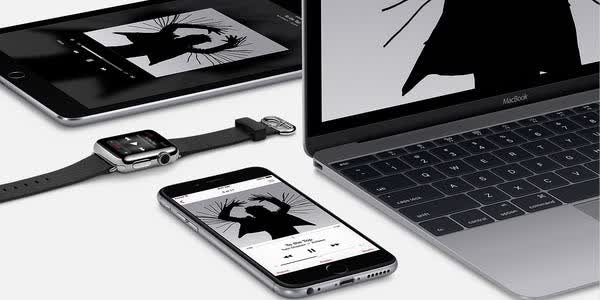 In today's article, we will go through a sum of the parts valuation analysis of Apple (AAPL) based on two factors. The first factor is somewhat qualitative, in that, it's a description of the ecosystem, or walled garden as some call it, upon which the second factor rests. The second factor relates to the growth of certain business segments within the ecosystem that have proven themselves capable of fueling Apple's business growth for years to come.

The walled garden refers to the technological ecosystem in which one finds themselves once they have purchased two or more Apple products. It's the idea that Apple has a substantial competitive advantage over their competition because one can own a smartphone, laptop, desktop, watch, speaker system, and TV, and they can all be seamlessly integrated with user friendly Apple software.

In the world of Android and Windows, such seamless integration does not exist because Alphabet (GOOG) (GOOGL) designs the Android operating system, Microsoft (MSFT) designs Windows OS, and, for example, Roku (ROKU) or Amazon (AMZN) designs smart TV operating systems. This leads to a fragmented user experience that cannot rival that of Apple's. Hence, once one enters the Apple ecosystem, it is unlikely that they will exit, and as Apple introduces more products, i.e., their AirPods or Apple TV streaming service, those new products seamlessly and conveniently integrate into the ecosystem, building the wall ever higher.

Great! So What's It All Worth?

While the walled garden is certainly something to celebrate for shareholders, parts of the walled garden have reached terminal growth, and it has become utterly imperative for Apple to focus on other aspects of the wall, lest competitors besiege their ecosystem and create an opening through which "eco-citizens" might leave.

Valuing Each Of Apple's Individual Businesses

As can be seen in the above, "Wearables, Home and Accessories" grew at 41% yoy from 2018 to 2019. Additionally, Services grew at 16% yoy. These two growth rates are essential in forecasting the value of Apple, because the iPhone, Mac and iPad have essentially stopped growing entirely, as can be seen below.

With the above metrics, it's rather easy to create a sum of parts valuation, whereby we can identify exactly what to expect in the way of future returns from our Apple holdings.

Assumptions: The following DCF model is predicated on a few assumptions regarding the margins of these businesses and the resulting free cash flow they should produce.

2) Free cash flow to shareholders is assumed to be about 80% of the above operating margin when we account for deductions resulting from an effective tax rate around 20% and interest expense.

3) For modeling purposes and in light of the recent stagnation in revenues, we assume 1% annualized growth for the entire segment, and 0% thereafter for a 100 year period of time.

This is where the fun starts.

1) Firstly, the model assumes an average of 20% top and bottom line growth for the next ten years. Considering Wearables, Home and Accessories are growing at a steady 35-40% presently, this may certainly prove to be a conservative estimate.

2) Gross margins for the segment as a whole rest at 32% throughout the 10 year period of the following DCF model, and operating expenses rest at 13%. This is the same as the iPhone, Mac and iPad segment because Apple combines both of these into one "products" segment, for which they give a total gross margin. This may lead to some distortion in results due to the chance that newer products will have higher operating margins, and therefore generate more FCF.

3) Free cash flow to shareholders is assumed to be about 80% of this operating margin when we account for deductions resulting from an effective tax rate around 20% and interest expense.

Lastly, I will model 10% growth for the next 10 years in services.

Projected share buybacks resulted in a CAGR in FCF to equity per share of 14.28%, instead of the initially assumed 12.5%.

To sum up the DCF present value, and to identify in the near term how shares will trade, let's add up the values of the individual businesses:

Apple continues to aggressively repurchase shares as they execute their leveraged recapitalization, whereby they eventually will become cash neutral, which means the cash on their balance sheet will equal their total long-term debt. 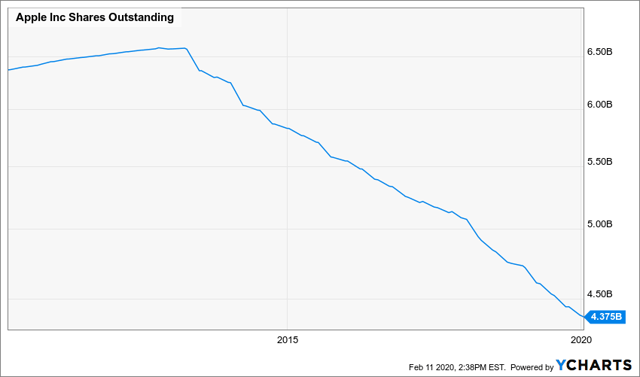 This means that Apple will likely execute another $58.9B worth of share repurchases during fiscal year 2020. This is likely because Apple's financial team is probably employing a DCF model nearly identical in nature to mine, which is further demonstrating to them that their shares are fairly valued at worst, and potentially undervalued.

For myself and my team at L.A. Stevens Investments, we view share repurchase programs more often than not as the most ideal method by which to return capital to shareholders. It enables investors to maximize tax efficiency by strategically liquidating their holdings during a period in their lives when it would be wisest, from a tax perspective, to do so.

Therefore, we see Apple's conservative dividend policy juxtaposed by their aggressive share repurchase program as very positive. With that being said, dividend policy cannot be ignored in creating a company's valuation. 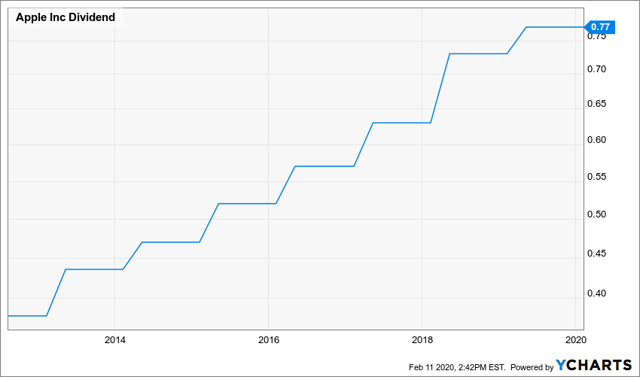 In the next section, I will tie together all of the components of this valuation and include a valuation based on DRIPing Apple in, for example, a Roth IRA.

Tying It All Together: Price Targets & Expected Returns

Below you will find what is normally the third step in my valuation model. Refer to some other far shorter articles of mine, in which I clearly employ the three step model, for further clarification.

The third step always involves normalizing the share price for the reality that after 10 years, they will have a P/FCF multiple, by which their share price will be defined. Below you can see that normalization:

Adding the three business share prices together, we arrive at a price target of $537.85 by 2030, which implies a CAGR of only 5.33% for the next 10 years based solely on share price appreciation.

I want to point out that the largest influencing factor on this estimate is my assumption that Wearables, Home and Accessories would grow at an average rate of 20% annualized for 10 years. For the past few years, it has grown at 35%-40% annualized, so 20% may be slightly too pessimistic. A sustained 30% growth rate would indeed materially alter the final share price, though such an assumption would be rather reckless, as 10 years of sustained 30% growth would be challenging for the mature titan that is Apple.

So in light of these rather conservative estimates (feel free to tell me if or how you disagree), Apple has share price appreciation ahead; however, the share price alone may not be able to rationally beat the market over the next decade.

But before we write off Apple as a market under-performer, let's look at what returns would be for a person DRIPing Apple in a tax exempt retirement account.

We purchased a great deal of Apple at around $180, and we hope to achieve a stable 11.6% CAGR from the investment through DRIPing; however, at today's price, we would not recommend putting capital to work in the stock.

Will Apple reach $400? Yes, of course, but that doesn't mean it's going to outperform the market over the coming 10 years from a starting point of $320.

As always, I'm very grateful for your readership, and happy investing!

Follow Louis Stevens and get email alerts
+
Add a comment
Disagree with this article? Submit your own.
To report a factual error in this article, click here.
Your feedback matters to us!