On the back of rebounding oil prices and an ever-higher stock market, midstream indexes were positive this week.

The broader AMNA index was well ahead of the MLP Index.

Oil prices were higher on Wednesday as coronavirus concerns abated some and the U.S. liquids inventory report posted a positive data point for refined products demand.

On the back of rebounding oil prices and an ever-higher stock market, midstream indexes were positive this week. In a familiar refrain, the broader AMNA index was well ahead of the MLP Index, reflecting better performance among corporations, both U.S. and Canadian. It seemed to be all about the macro this week, with little news in U.S. midstream. 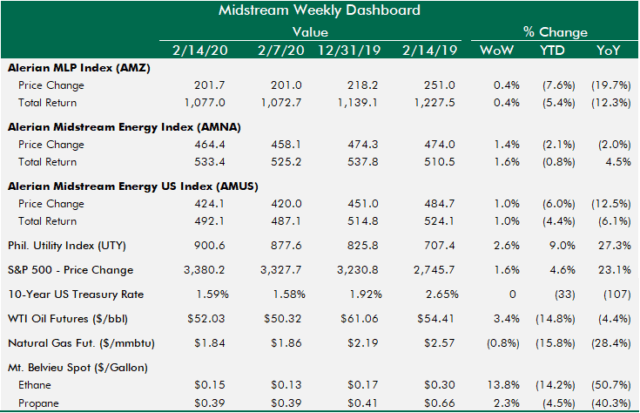 Earnings season continues to drag along, with DCP the most notable MLP to report this week. The two big Canadian midstream corporations reported non-controversial results later in the week. Things pick up in the upcoming week, with ET, WMB, TRGP, ENBL, CEQP, GEL, SUN and SHLX all set to report.

Oil prices were higher on Wednesday as coronavirus concerns abated some and the U.S. liquids inventory report posted a positive data point for refined products demand.

This week, major oil company British Petroleum (NYSE:BP) (or at one time 10 years ago "Beyond Petroleum") announced a target to have zero net carbon emissions by 2050. 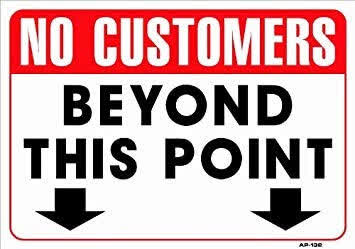 This is just the latest signpost of the impact climate concerns are having on the messaging from energy companies. Market sentiment continues to favor renewables over fossil fuels, and it appears to be impacting the market's expected future value of fossil fuel related energy assets.

Beyond the BP announcement and some largely shrugged off results from TRP and ENB, it was a slow week for midstream. So, we can just bask in the glory of a second straight non-negative week for midstream for an extended weekend. Enjoy it midstream investors, you earned it.

BSM led all MLPs, helped by stronger oil prices. MPLX reacted positively to reports of potential bidders for Speedway at attractive prices, which may have some positive readthrough for MPLX if it means MPC takes less drastic action to "solve" MPLX. Other MLP winners CEQP, GEL and HEP had no news, but all three report results in the upcoming week. CCR was the worst performer after reporting results and guidance out of whack with market expectations.

NBLX was among the biggest losers this week on weaker results Wednesday, but it was on Thursday when the big drop happened and when other MLPs with exposure to Colorado assets all seemed to selloff in tandem, including DCP, WES and SMLP. Colorado continues to organize against development in populated areas and another tense ballot initiative situation may emerge again this election cycle. 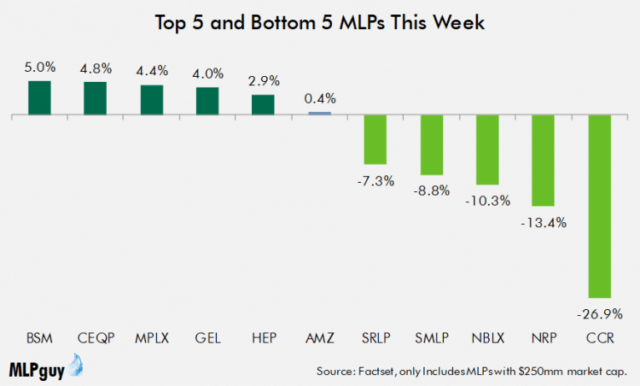 SMLP repeated in the bottom 5 this week. CCR went from first last week to worst this week. Also, CCR was the best performing MLP for the year overall before this week's big decline. All 5 of the bottom 5 YTD are down more than 20% already, including a distribution! BSM climbed out of that bottom 5 group this week, replaced by NBLX. NS took over the top spot YTD. HEP and EVA joined the top 5, replacing CINR and CCR. 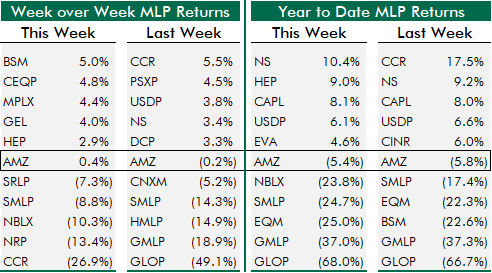 Median return of the midstream corporation group was negative this week, but the big outperformers were some of the biggest market capitalization companies. KMI continues to grind higher, attracting capital after its positive earnings announcement several weeks ago. 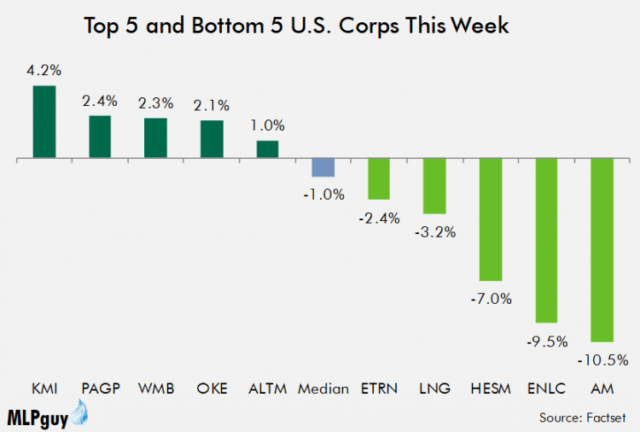 Stocks that worked last week, worked this week. KMI, WMB and OKE repeated in the top 5 week over week.

Stocks that did not work last week did not work this week. AM, LNG, HESM, ENLC all repeated in the bottom 5 week over week.

On the YTD leaderboard, KMI took over the top spot, HESM dropped into negative total return territory, leaving just three positive midstream corporations in the group. ETRN joined the negative 30% club in the bottom 5 YTD group, as the divergence between winners and losers widens. 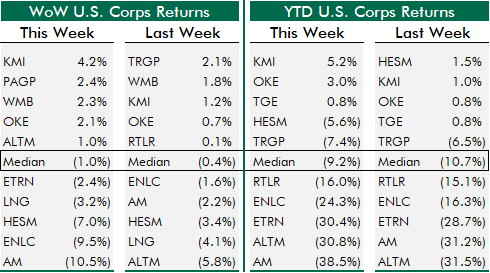 Every Canadian midstream corporation was positive this week. TRP and ENB reported results that were slightly below market expectations, but pretty close. Both stocks started out their respective reporting days negative and finished positive. Canada seems to be winning the fund flow battle again this year as money leaves the shrinking universe of MLPs in search of liquid midstream alternatives. Gibson (OTC:GBNXF) led the way this week on no news. 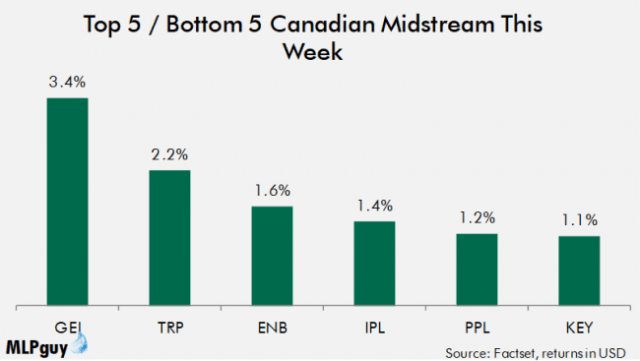 Super light week of transaction news. Things are very quiet on the M&A front, but that never lasts.