If Spotify (NYSE:SPOT) is to succeed, it will have to change the audio landscape dramatically. Today, it looks like a long shot. In several years, will we look back on this company as having done the unimaginable, or will they falter along the way?

I believe Spotify has a good chance of changing audio forever. The question is, are they a worthy investment at these levels, or do the risks outweigh any potential benefits?

The Growth of Audio

With new video streaming services popping up seemingly daily, audio has taken a bit of a backseat. Audio is, however, growing too, and it's growing fast. Research from Ark Investment Management shows that audio streaming, a ~$15B market today, could soar to more than $50B by 2024. That's 32% CAGR!

I should add a caveat here; I consider some research from Ark Investment to be a bit of a stretch. In this case, however, I think there are several encouraging signs to back up that growth. In the RIAA's 2018 report on the music industry, they outlined how music streaming revenues continue to grow, and how the music market is also growing. The RIAA also released a similar report covering the first half of 2019, growth didn't show any signs of stopping.

Then, there's podcasting. Podcasting, a simple means of delivering an audio feed, is seeing staggering growth as of late. According to data from Statista, 35% of the U.S. population could be considered monthly active listeners of podcasts in 2019. It's a far cry from, say, watching TV, but that share continues to grow year-over-year. 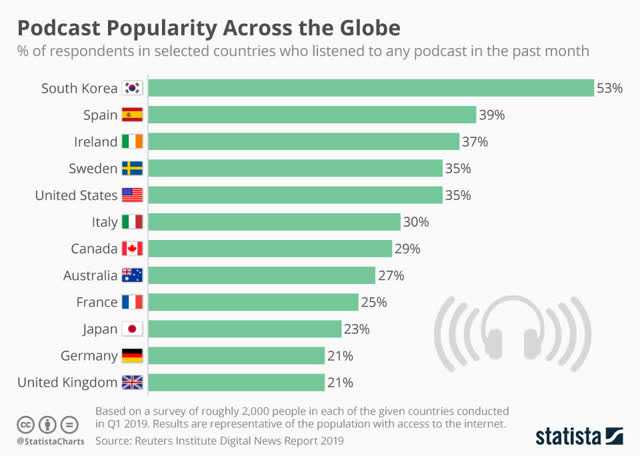 The High Cost of Music

Why would Spotify be so interested in podcasting? Well, quite simply, the writing is on the wall for Spotify. While they (and Apple (AAPL)) may have won the music streaming game, there are limits to growth and profits in that industry.

After product costs have been subtracted out (primarily fees to music providers per its annual report), Spotify is left with a gross profit margin of 25%. This is a far cry from most tech companies and leaves Spotify with little R&D / SG&A wiggle room if they wish to become a profitable company.

That's where podcasts come in. Podcasts don't charge royalties per play. They also have ad spots (of which Spotify now owns some of the most lucrative in Gimlet and The Ringer). Ad spots increase revenue and getting people to listen to podcasts, to begin with, takes away listening hours from music. If Spotify can get customers away from music and into podcasts they:

It's a wise game for Spotify to be playing at this point. They're still growing their user count, they're still the market leader, and they have to make something work. It also makes things easier for them that competitors are primarily focused on video, leaving Spotify to wrangle up the audio market before others offer their full attention.

There are some hefty headwinds that Spotify will face. These headwinds, in my opinion, make any investment in Spotify a purely speculative play. Overcoming them all will be quite the task. If they can pull it off, the payoff for patient investors will be great.

The largest of those challenges is complacent competition. No, not a poor choice of words, competition in the streaming music space is complacent, that is, for now. The truth is that neither Amazon (AMZN), Apple, nor Alphabet (GOOG) really cares about their music plays, but should they begin too, Spotify could be in real trouble.

Spotify is a ~$26B company. Competitors offering similar apps (Apple, Amazon, and Alphabet) all have more cash than Spotify's market cap. They also occasionally have intraday trading swings bigger than Spotify. All this to say that they have the market power to erode any advantage Spotify currently holds in the music market, almost at a whim.

A move that is likely coming that won't bode well for Spotify's iOS contingent is Apple's bundling. A music / TV+ / Arcade / News bundle costing $20/month will have users switching in droves, especially so if family bundling occurs at a similar price point. Even at $30/month, such a bundle would give Spotify troubles. This right here is probably my biggest fear for Spotify in the near-term. 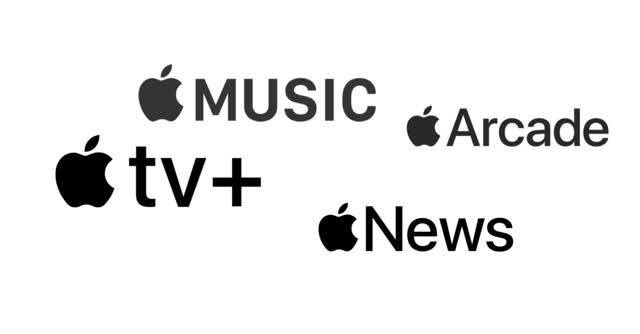 Apple's quick success in the music space also gave Spotify some pricing troubles with the record labels. It used to be thought that the many millions of subscribers in Spotify's back pocket could be used to sway music rights holders to cheapen royalties. Not anymore, Spotify is even more vulnerable to rights pricing, and if even one of the big three record labels stepped away, the company is as good as done. 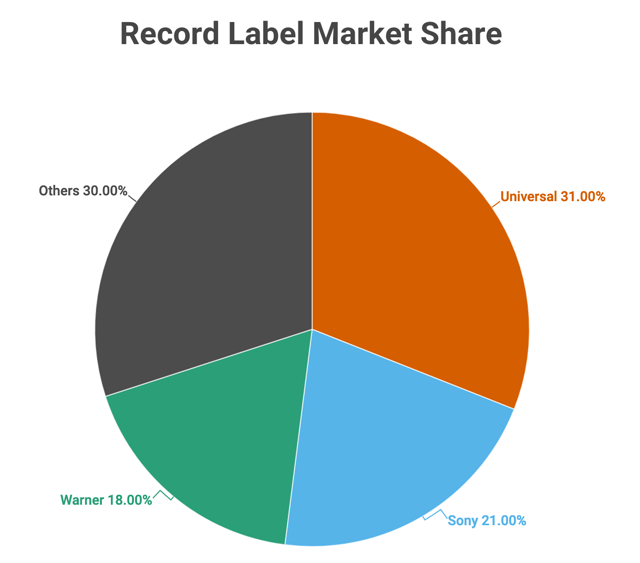 The Need for Differentiation

We know that Spotify is trying to branch out into podcasts, but is that enough? I don't think so. While it will give a slight boost to margins, the company will still need to hire staff and content producers to get those podcasts out there.

Spotify will also need to continue to lead the market in terms of content quality. With more than 850,000 podcasts out there, users have a lot to choose from should Gimlet and The Ringer begin to slip. Producing top-quality content using top-quality talent does not come cheap.

So, where else could they go? I have three areas:

Hardware is an obvious play, and it's something we know that Spotify has been dabbling around with. The company has been testing products for the car, but that might not be enough, especially as Alexa for the car seems more feature-rich. The company should be looking to build out speakers and possibly even challenge Apple's booming headphone market with a top-tier device. 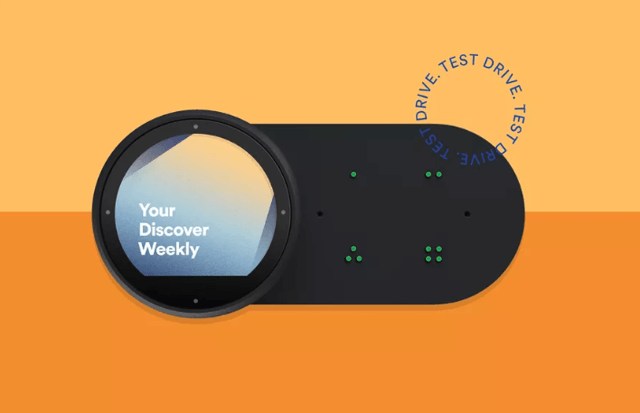 Hardware, however, is expensive. Spotify's current margins don't really allow much room for R&D into this type of venture, and there's no telling if the market would opt for Spotify made headphones over a new set of AirPods. The hardware market, while it could be a lucrative addition to the flywheel, might be too risky for Spotify.

How about social? Since launching in the United States, Spotify has had a social presence. The company launched its service with a Facebook integration allowing users to share listening habits with friends. To increase user buy-in, I think they have to up this social game over the long term. 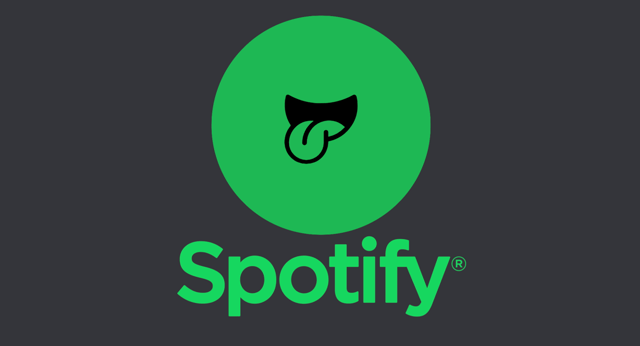 New services from Spotify, such as Tastebuds and Influencer Stories are steps in the right direction. For me to truly be a buyer of the stock who's able to sleep at night, I'd like to see a more significant presence in these spaces.

Finally, there's fringe audio. Spotify is now the place to go for your music and podcasts, but what if it was also the place museums sent you for their audio programs? There are also a variety of apps that offer walking tours around cities, which Spotify could tap into to truly become the place you go for audio. 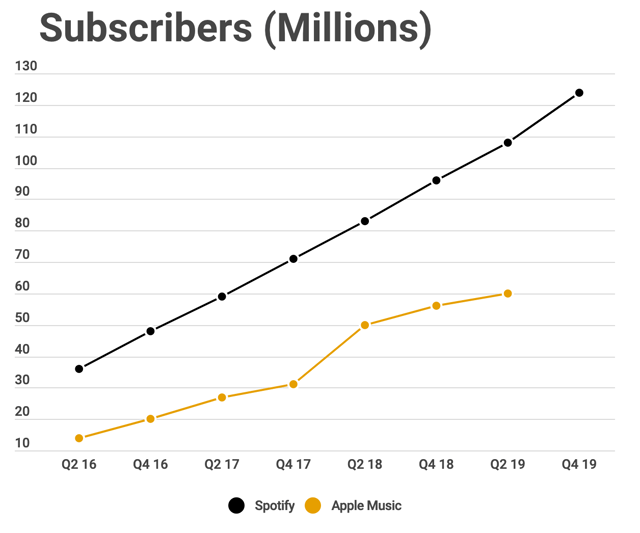 If Apple were not already so deeply entrenched in the music game, I think I'd buy Spotify at these levels. Given Apple's current position and its ability to build an entertainment bundle, I would not buy Spotify at these levels. If there were a significant pull-back to the $110 range, bringing them closer to a $20B market cap, then I'd seriously consider loading up for the long-haul.

I can only be neutral on Spotify at this time. Spotify is not a stock for those that want to rest easy at night. For those with a tendency towards risk, however, I can see many reasons to want to own this stock. Several more years of making correct decisions could change the audio game forever, leaving Spotify at the helm.

Ash Anderson
2.19K Followers
I am a Software Engineer by trade and an avid market participant. Traditionally a long-only investor, I use home-grown software to find the best companies at the best prices. My investment philosophy is primarily high-quality firms. Firms that hold a significant advantage in their market, or demonstrate the ability to get to the peak. Software is my area of expertise, so my writing will frequently cover those in that sector. I also cover stocks that I consider to be high-quality, and investable that are outside the software world.Fans of video, please check out my YouTube channel where I also cover finance and stock research at youtube.com/ashanderson1