There is a new dynamic at play in the gold futures and options markets at the COMEX, something that has never been seen before, at least not in recent contemporary commodities markets. It could prove explosive for gold, even in the short to medium term, and a problem for the world's biggest bullion banks. These include the 6 full market maker members of the London Bullion Market Association (LBMA), which are Citibank (C), Goldman Sachs (GS), HSBC (HSBC), JPMorgan Chase (JPM), Morgan Stanley (MS), and UBS (UBS). What is happening now is a fascinating confluence of events. 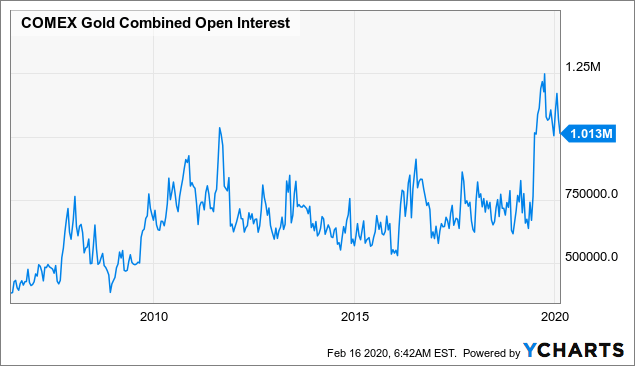 Second, after reaching an all time high of about 1.25 million contracts in September, open interest fell to a low of 920,000 contracts in November, a fall of roughly 25%. Before July 2019 however, that low of 920,000 was almost the same as the previous all-time high hit at gold's all-time dollar high back in September 2011. Third, ever since the July 2019 spike in open interest, the coincident pattern of a falling gold price with falling open interest no longer seems to hold. This third point I think is the most significant of the three.

Why? We can think of a bullion bank as a fractional reserve bank for physical gold. Bullion banks never hold enough physical gold in storage to fulfill all futures obligations, just like regular banks only hold a fraction of cash on deposit. Total gold physically stored at COMEX and NYMEX is currently 8,712,723.766 troy ounces. The total changes every business day but you can track it at the link. Current combined open interest of 1.013 million contracts according to the YCharts data represents 101.3 million troy ounces, for a fractional reserve ratio of 8.6% currently.

Just like a run on banks generally leads to a rise in the purchasing power of the currency being withdrawn, a gold run on bullion banks should, in theory, lead to the rise in purchasing power of gold, or in other words a rise in the dollar price of gold. We are not at a point yet where a run on bullion banks is happening, but it looks as if a setup for that potential is building and could happen fairly soon. Of course, I do not know exact timing but I will try to explain what I will be watching for.

A Change in Pattern Since May

Until May 2019, the interplay between combined open interest in gold and the gold price seemed to work as follows. As the gold price rises, bullion banks issue more contracts at the higher price, thus inflating the supply of paper gold obligations. As the supply of paper gold increases, downward price pressures on gold accumulate, causing the gold price to eventually fall as speculators are washed out. As the price falls, bullion banks cover their positions at the lower prices, pocket the difference, which causes open interest to fall, and the cycle begins anew.

This cyclical process no longer appears to be functioning as it once did. Back in May, combined open interest on the COMEX suddenly skyrocketed, climbing a record 86.3% in the space of 4 months to an all time record high. During that time, the gold price rose by 19.38%. 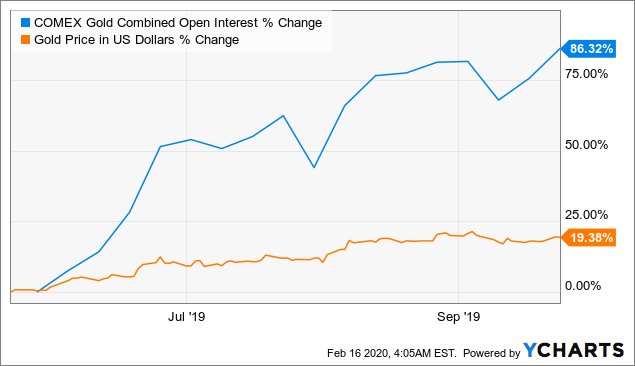 While the enormous spike in paper gold derivatives on the COMEX alone was extreme, the fact that the gold price was rising in tandem with this spike was still fairly normal. However, what is happening now is that gold is no longer falling together with open interest. The steepest drop in combined open interest on the COMEX since last May measured 25.78% top to bottom. During that time though, the gold price fell by only 2.44%. 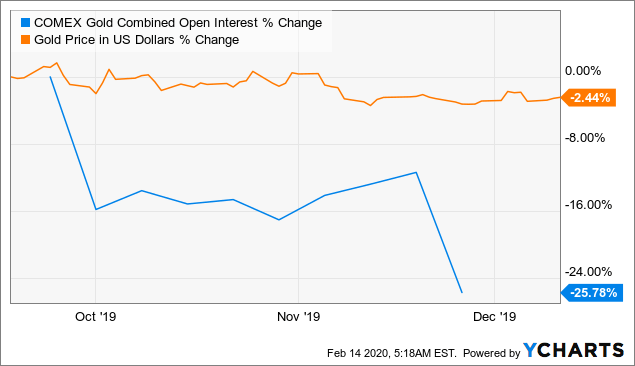 This was unusual by itself, but now the situation is getting weirder. Since an intermediate top in open interest in early January, we've seen a mild fall of 15.35%. But since that peak, the gold price has actually risen by 0.31%. See below. 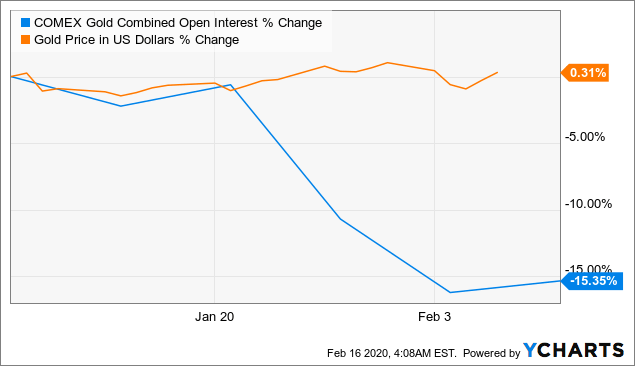 It's hard to know exactly what is going on because who owns what contracts is not fully transparent. But given the evidence, it is reasonable to speculate that one or more bullion banks is trying, or perhaps even being forced, to cover positions into relative strength.

It's certainly not definitive yet that we are seeing the beginnings of a short squeeze. A 15.35% fall is not particularly large and the gold price may have fought that off briefly. However, open interest is steadily rising again, possibly to yet new record highs. If, during the next inevitable fall in open interest from what could easily be new record highs, gold either stays steady or rises, then the chances of a short squeeze at the bullion banks increases to the point I'd be willing to place timed bets on it in the options markets.

Seeing this in the context of the three largest peaks/falls in open interest, we do see that what is happening now is different. Before May of last year, the all time high in combined open interest was hit in September 2011 at about one million contracts at the peak of the last gold bull market. Open interest proceeded to collapse from there by 38%, together with a hard fall in the gold price of 16%. 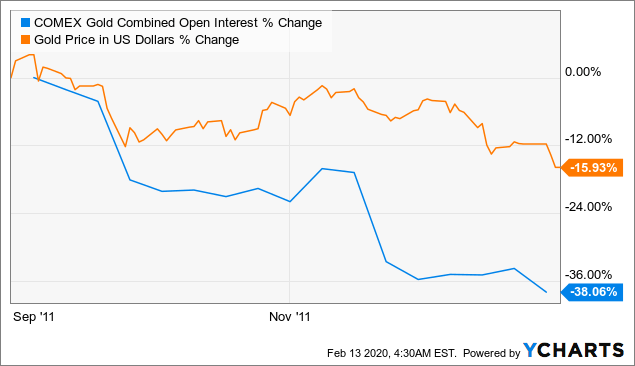 During the last peak in open interest in July 2016, something similar happened. Open interest fell by 39%, and the gold price by 10.2%. Not as much as the 16% fall at the end of the last bull market, but still a sizable fall. 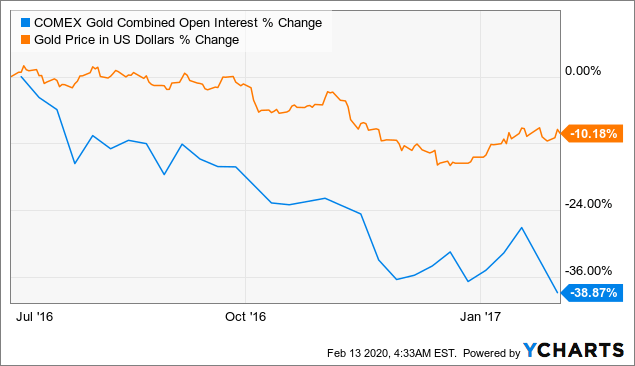 Interestingly, during the brief but sharp fall in gold during the depths of the 2008 financial crisis, we also saw a concurrent peak and fall in open interest, but the fall in the gold price was relatively mild by comparison. Charting from the open interest peak to trough that year we have a massive fall of 50%, the gold price falling by only 6.6%. 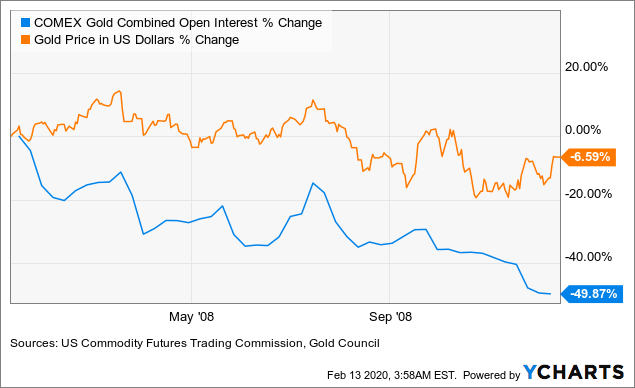 In any case if the gold price is actually rising in the face of falling open interest (which it in fact did briefly at the end of the 2008 gold selloff as can be seen at the end of the chart above), we could be at the precipice of a very strong move in gold that could be accompanied and fueled by a short squeeze, AKA a run on the bullion banks.

What could indicate that this is actually happening? Two things, I believe. First, we should see increasing demand for Federal Reserve-sponsored repos as bullion banks would need more and more reserves to roll over their gold contracts or cover them. We are already seeing some possible evidence of this as the last four 14-day repo operations starting February 4 have all been oversubscribed. The four before that were all undersubscribed. A second confirmation would be an inverse relationship between the gold price and the stock prices of the largest bullion banks. This second indicator may not be a leading one though, so it would only confirm after the fact. Since this hasn't happened before we don't know what it will look like, so my main indicator will be what happens to the gold price the next time open interest takes a dive.

For those interested in monitoring the conditions for this trade, watch the daily open interest figures at the COMEX and watch what happens during the next open interest contraction. If gold stays steady or climbs, then an options trade on (GLD) going out to 2021 could be particularly profitable. Alternatively, buying the main leveraged gold and gold stock ETFs like (UGL), (NUGT), or (JNUG) would work as well with less of the timing constraints, but more capital would need to be committed. I will indicate in the comments when I take leveraged positions for those who are interested in following this trade. For those who have no core non-leveraged positions in gold yet, I would strongly suggest establishing some now, rather than trying to execute a perfectly timed trade here.

Austrolib
6.54K Followers
Author of The End Game Investor
A gold-based approach to protecting wealth and profiting off Fed inflation

Disclosure: I am/we are long GLD, GDX, GDXJ. I wrote this article myself, and it expresses my own opinions. I am not receiving compensation for it (other than from Seeking Alpha). I have no business relationship with any company whose stock is mentioned in this article.