Buying stocks for your children is a wise long-term choice, which will come in handy in the future. Whether it goes towards college expenses, the launch of a business, or a general source of growing wealth/income, building a portfolio early on can compound into great returns. Besides being wise in terms of wealth appreciation, by investing early, kids learn the basic concepts of finance and the value of money, should they be used meaningfully.

In my view, while a smart choice would be that parents invest in market ETFs, individual stock pickings are also necessary, since kids will find it easier to associate with. That's why in this article, I am suggesting three stocks that are not only great long-term investments overall but also a great fit in the context of a child's portfolio.

My first pick is Nike(NKE), and the primary reason behind it is its brand recognition. The company's logo is, without a doubt, one of the most recognizable in the world. Moreover, since kids are very likely to own several Nike shoe pairs and apparel throughout their childhood, their brand is very easy to associate with. Owning a little piece of your favorite brand should be exciting and a great starting point in attracting early interest in the world of investing.

Besides, Nike makes for an excellent investment, regardless. The stock has dramatically outperformed the market over the decades, driven by product quality, brand recognition, and dominance in the sports apparel sector. 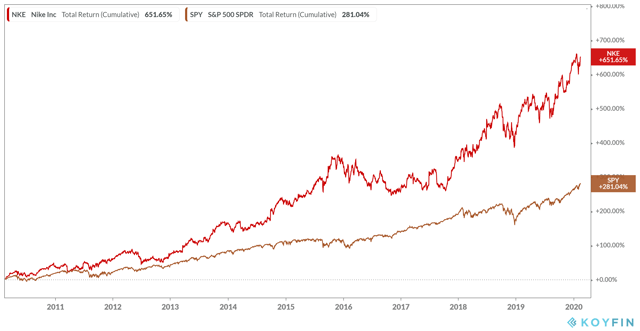 While Nike's current yield is relatively low at the moment, at less than 1%, dividends can quickly accumulate and compound over time, especially when they are growing at double digits, like Nike's. Its safety is well assured too, with a payout ratio of ~33%. Finally, management has constantly been increasing its buyback program. Nike has repurchased $922M worth of shares over the last twelve months. Again, even though this amount seems insignificant in terms of Nike's $160B market cap, it's a great way to reduce the company's share count over time. Regardless, the primary source of the stock's appreciation has been its robust EPS growth, but the growing dividends and buybacks make for a great addition. 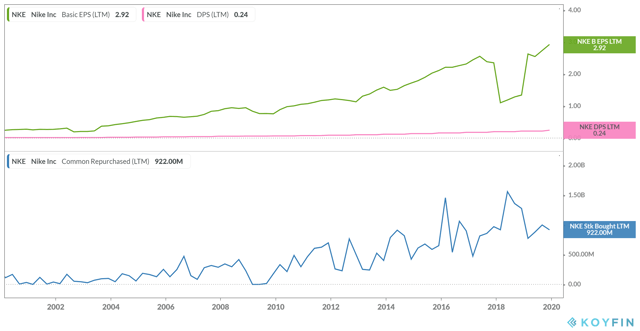 What should be watched when buying into Nike is its valuation. The stock has had a fantastic run, which has caused it to be trading above its historical P/E ratio, currently at ~36. While the stock is by no means cheap, the premium can be justified considering the company's brand value, outstanding moat (oligopoly, economies of scale, athlete deals, etc.), and continuous growth. The best option, in my view, is to hold Nike for the long term and average down with every pull-back. 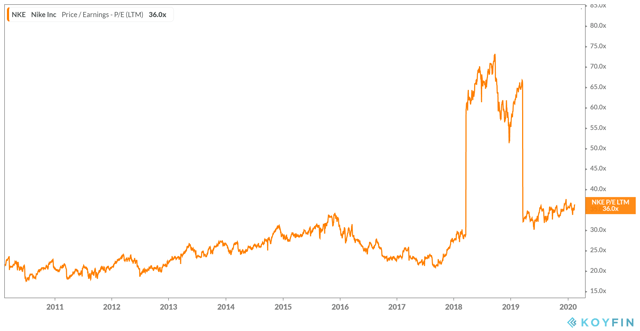 Apple(AAPL) is another pick that perfectly fits a child's portfolio. Similarly to Nike, the brand recognition is beyond enormous. Apple's products are not only used daily (or should I say hourly?), but they are vital devices for probably every single human activity we perform. Kids can easily associate with Apple as they utilize their products from early on. In any case, Apple remains a great shareholder value creation machine, which I consider a must-own for the long term.

We also returned nearly $25 billion to shareholders during the quarter, including $20 billion in share repurchases and $3.5 billion in dividends and equivalents, as we maintain our target of reaching a net cash neutral position over time.

The amount of cash Apple returns to shareholders is enormous. Over the past twelve months, the company has repurchased ~$81B worth of shares. 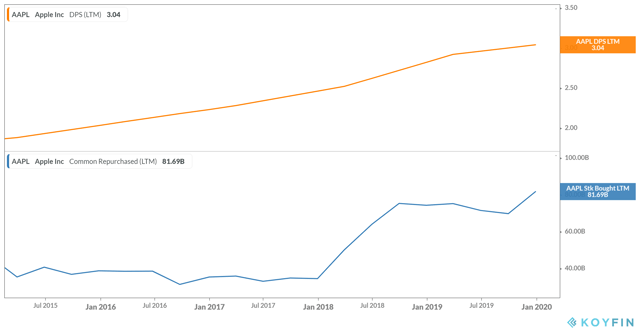 With Luca's goal to drive the company towards cash neutrality even more cash is expected to be returned. What's more impressive, though, is that even with Apple's effort to "get rid of its cash," the pile keeps growing, having reached a mind-boggling ~$107B, as of its latest report. 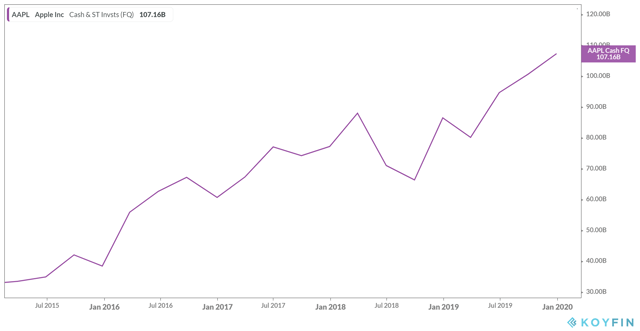 Since 2013, Apple has repurchased ~32% of its shares, while its dividend keeps growing between a high-single to low double-digit rate, which is a nice complimentary mean of returns, along with the monstrous buybacks. Again, what investors should be cautious, is its valuation transformation. With its services growing, Apple's valuation has transformed from a hardware company to services/recurring revenue one. As a result, the stock is currently trading at historic highs in terms of P/E, at ~26. Similarly to Nike, I see Apple as a long-term must-own stock that investors should dollar-cost-average, should its price decline. Driven by its growing dividends and buybacks, in an effort to become cash-neutral, Apple should deliver above-average returns, and that's why I believe it should be a substantial holding in a kid's portfolio. The company's brand value is gigantic, and at the moment, the only problem Apple seems to be facing is that it has too much cash. A good problem to have, if you ask me. 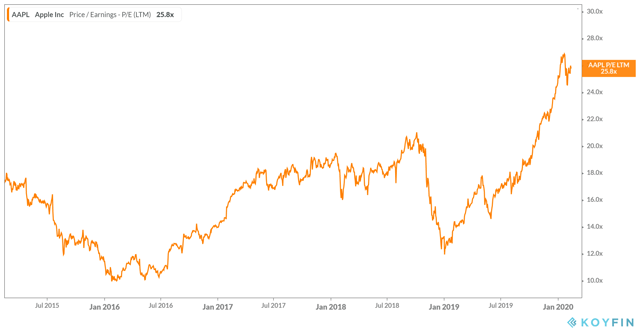 Google- For the future of everything

Another top-brand that its logo shows daily on every child's screen, is Alphabet (GOOGL)(GOOG). Children may understand that by owning Nike and Apple, they own a piece of the company that manufactures their favorite products. However, with Google, the case is different and way more special. In his famous book, "The four," NYU professor Scott Galloway masterfully explains the deal with Google, and that is the special trust humans develop, by asking the search engine all kinds of questions. Nowadays, as the book proposes, when one faces a symptom, they are way more likely to google it in an effort to identify what's happening to them, than actually calling their doctor. Google is more than a service, but instead a bond of trust. That's why, in my view, Google is a fantastic pick for a child's portfolio, besides, of course, its financial and sector dominance.

Moreover, with Larry Page and Sergey Brin, who previously acted as CEO and president of Alphabet, respectively, stepping down, the company may eventually become more shareholder-friendly. That seems to be the case, already in fact. With Sundar Pichai taking the helm, the company published more information in its latest report, including numbers for Youtube, which were previously unknown.

Regardless, Alphabet is an excellent long-term holding, not only for dominating the internet but also for its multiples venture. Waymo, for example, has been slowly but steadily making significant progress. Other exciting investments include Space X, in which Alphabet owns a ~10% stake.

Considering the company's robust growth of still nearly 20% in revenues, as well as the potential of its multiple promising investments, its valuation is relatively fair. Trading at a P/E of ~30, investors are buying into a quality business with a fresh CEO, robust growth, and a $25B buyback program to keep them excited. In my view, the stock is a fantastic long-term holding, that should produce significant returns in a kid's portfolio. Potential risks with Alphabet include government regulation as well as the usual fines the company faces. 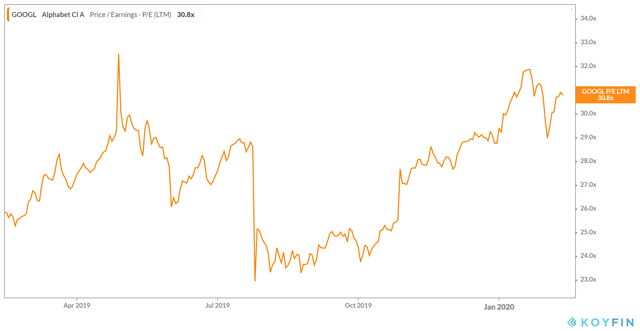 Nike, Apple, and Google are all fantastic holdings that have produced amazing returns for investors over the past decade. Besides them being robust investments, these three companies make a great fit for a child's portfolio, as one can quickly identify their brands, being exposed to their products and services daily.

Disclosure: I am/we are long GOOGL, GOOG, AAPL, NKE. I wrote this article myself, and it expresses my own opinions. I am not receiving compensation for it (other than from Seeking Alpha). I have no business relationship with any company whose stock is mentioned in this article.