Bullish prices to be expected for soybeans in 2020.

China's projected soybean demand is expected to increase in 2020.

A decrease in output from the United States will lead to an increase in soybean prices.

Soybean prices started the year bullishly trading at $9.57 a bushel. Towards the end of January, prices dipped to $8.7 a bushel. As of February, the prices are slowly rising, a 4% increase since January. In this article, I will explain why I expect the prices to continue increasing. First, China's projected demand for soybeans in the 2019/2020 season is expected to increase. Second, I will explain how the US decreasing its soybean output will lead to higher prices.

Investing in Dow Jones Commodity Soybeans Index (DJCISO), and S&P GSCI Soybeans Index Spot (SPGSSO), are a sure way to reap the benefits of the price increase.

In July 2012 this "protein gold" traded at an all-time high of $17 a bushel, a drought in the United States and East Europe was the main cause for the price surge. 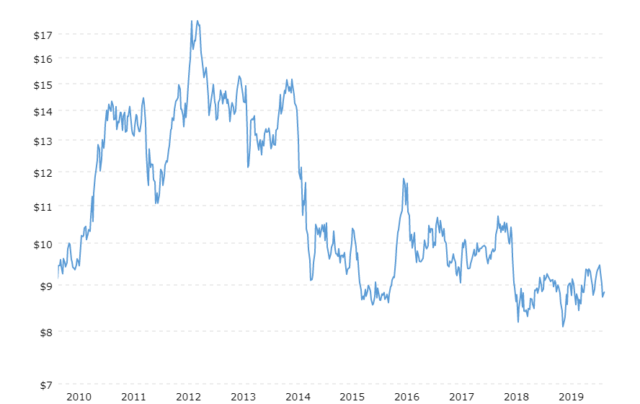 In September 2014, soybean prices dropped to $9 a bushel and in recent years, the highest price recorded for soybeans was in June 2016 at $11.78 a bushel and since then the prices have traded above $8 a bushel.

Soybean prices will rise because the global economy in 2020 will grow. Global manufacturing and trade had slumped since late 2018, but a rebound is expected in 2020. The signing of the Phase 1 trade deal has eased a lot of tension between the world's biggest economies.

The coronavirus outbreak has caused low exports of soybeans to China, as shipping routes are reducing calls on Chinese ports and squeezing of air freights. Brazil's soybean exports fell in the first week of February due to the virus, declining to 198,600 tonnes per day on average. The outbreak of the virus could cause a drop in several commodity prices, soybeans being among them. The virus will likely affect soybean demand and price.

I believe it is difficult to predict the impact the virus will have on soybean prices, as most of Brazil's soy from the current crop is presold, giving Brazil breathing space until the virus is controlled.

Between July 2018 and July 2019, it was reported that the world's largest pig herd had reduced by 32.2% and the number of sows had reduced by 31.9% due to the African Swine fever, thus leading to the low demand for the pig feed ingredient. China's protein diet consists of 60% pork, intending to curb the demand for pork, China turned to importing pork from other countries, and alternate sources of protein such as chicken.

Chinese pig herd is recovering from the most recent case of African Swine Fever. According to the director of the Husbandry and Veterinary Bureau of China's Ministry of Agriculture and Rural Affairs, pig production recovery has been rapid. By September 2019 animal inventories had reached 44.46 million, a 0.6% increase from the previous month and sow had increased to 6.10 million head, an increase of 3.7%.

According to USDA, China's projected consumption for 2020 remains unchanged from the previous years, 103.56 million mt of soybeans. China's soybean output for 2019/2020 is expected to be at 17.27 million tonnes of soybeans, and the Ministry of Agriculture expects 86.6 million mt of soybeans to be crushed in 2020 into soy meal, flat with the 2018/2019 level. 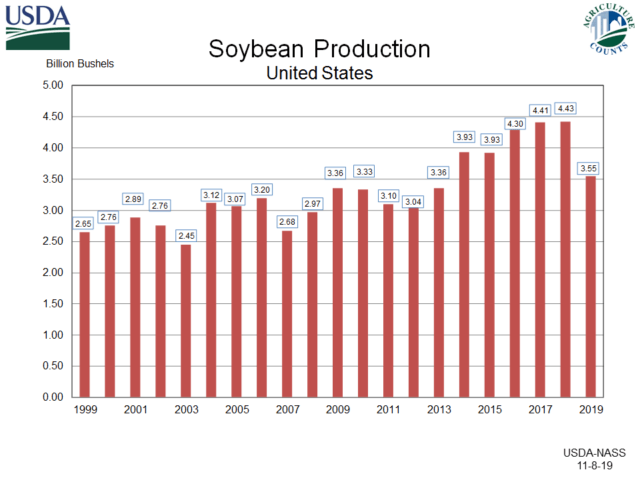 In July 2018, President Donald Trump waged a trade war with China, imposing tariffs on US $550 billion worth of Chinese goods. As a retaliation, Beijing imposed tariffs on US$185 billion worth of US goods, 25% of the imposed tariffs by China were for US soybean. Soybean prices in 2018 dropped from about $10 a bushel to below $9 a bushel and the prices have not risen much since then.

The United States is not the only country that has reduced soybean production. There are concerns over reduced output from countries such as Australia and Russia, due to bad weather conditions, which will ultimately lead to higher soybean prices.

With the signing of the Phase 1 deal between Beijing and Washington, China pledges to buy more of the United States agricultural products, soybeans being among them. No great change has been seen in soybean prices since China said it will only purchase agricultural products according to "market conditions".

I believe the low output from farmers in the United States will lead to a price increase in soybeans. Farmers may continue decreasing acreage dedicated to soybeans if China does not make true its deal to purchase more agricultural products from the United States. And this will push soybean prices even higher.

Soybean prices will continue increasing in 2020, with the pig herd in China continuing to recover and more soybeans required to be crushed into soy meal, I believe with time China will increase its demand for soybeans more than the expected projections.

Follow Winnie Muli and get email alerts
+
Add a comment
Disagree with this article? Submit your own.
To report a factual error in this article, click here.
Your feedback matters to us!