However, the fast-growing budget airline has experienced significant margin erosion since 2015. Its adjusted pre-tax margin peaked at 23.4% in that year, but fell to 11.9% by 2018 and remained at that level in 2019. As a result, Spirit Airlines stock has been trading for less than 10 times earnings recently.

Spirit Airlines does have moderately high leverage, with more than $3.5 billion of debt and lease liabilities. Nevertheless, the company merits a much higher valuation, due to its high growth potential and solid margins, which are likely to improve modestly over time. Spirit's recent move to focus its growth on mature markets should enable steadier margin performance and more predictable earnings growth. That's great news for investors and could enable substantial gains for Spirit Airlines stock over the next year or two.

New cities vs. depth of service

Over the past few years, Spirit Airlines has dramatically expanded its route map. By the end of 2019, Spirit served (or had announced new service to) 75 cities in the U.S., Caribbean, and Latin America, up from 60 cities served just two years earlier.

Adding service to new cities is strategically important. A growth airline like Spirit Airlines needs to develop new markets that can support further expansion in the future. That said, margins tend to be significantly lower on routes to new cities when they are first launched. First, Spirit doesn't have a built-in customer base in those markets yet. Second, it needs to add infrastructure and staff at the new airport, even if it only operates a small number of flights there.

By contrast, it's often possible to grow within existing markets without incurring as much of a short-term margin penalty. This can come in two forms: adding additional frequencies on existing routes and "connecting the dots" with new routes between cities the airline already serves. Both types of growth are good for unit costs, as Spirit Airlines typically can utilize existing infrastructure more intensively, spreading fixed costs over more flights.

Adding frequencies is a little trickier, as there's a risk that the new flights cannibalize demand for existing flights. However, Spirit serves most of its markets just one or two times a day, so adding extra frequencies often allows it to unlock additional demand from travelers who want more schedule options. Adding frequencies on existing routes can also enable new connecting itineraries. Moreover, Spirit's low base fares can stimulate strong traffic growth in popular tourist markets without compromising profitability. 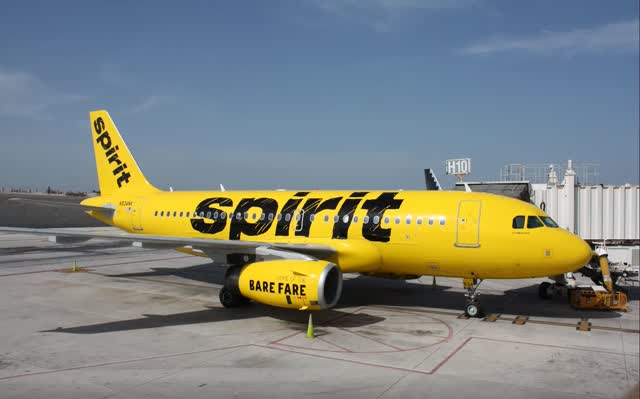 Focusing on existing markets for growth

On Spirit Airlines' recent Q4 earnings call, management made it clear that the airline will focus on connecting the dots and adding frequencies on existing routes as it grows over the next few years. That's not to say Spirit is going cold-turkey on new destinations. Last month, it announced that it will begin flying to two additional cities in Colombia in April: Barranquilla and Bucaramanga. But adding new cities will be the exception rather than the rule going forward.

This shift can be seen from Spirit's growth announcements over the past few months. Since last fall, the carrier has announced new connect-the-dots routes from Cancun to Austin, Cleveland, Nashville, Pittsburgh, and Philadelphia; from Nashville to Austin, Los Angeles, and Newark; from Austin to Newark; from San Juan to Boston and Newark; from Oakland to Fort Lauderdale; and from Baltimore to San Salvador.

Thanks to all of these new connect-the-dots routes and frequency additions, the proportion of capacity Spirit Airlines has in new markets is set to decrease year over year throughout 2020, even though Spirit's overall growth rate is accelerating compared to 2019. That bodes well for the airline's ability to return to unit revenue growth within the next quarter or two and hold its pre-tax margin steady for a second straight year.

When Spirit Airlines filed for its IPO back in 2010, the airline operated just 31 aircraft. By the beginning of this year, its fleet had grown to 145 aircraft, and that number is set to rise to 186 by the end of 2021.

Spirit has had to enter lots of markets over the past decade to support that fleet growth. And for most of its history, the airline ran just one flight a day on nearly all of its routes and operated only a handful of routes in most cities. As a result, it was rarely the most convenient option for travelers and had to rely on a big price gap relative to competitors to attract traffic. That has led to margin volatility in recent years, particularly as rivals have become more aggressive about matching Spirit's fares. 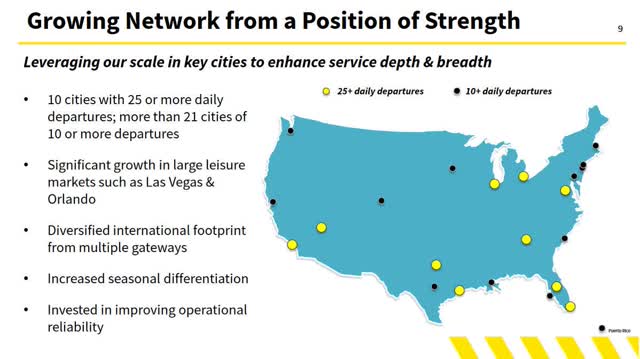 As Spirit Airlines becomes a bigger force in individual markets, its opportunity to market new routes from those cities to existing customers grows. (There are also unit cost benefits to running a larger operation at each airport.) As it becomes better known in those cities, its ability to add frequencies on high traffic routes improves. And as Spirit increases frequencies on various routes, more connecting itineraries become possible, unlocking new sources of demand and providing some protection against fare wars in particular city-pairs.

In short, greater scale and network density will enable higher margins at Spirit Airlines, all else equal. There will still be ebbs and flows in profitability, but operating more flights on each route and at each airport (on average) will be good for both unit revenue and unit costs. This will in turn enable Spirit to grow EPS at least as fast as its mid-teens long-term capacity growth rate.

If Spirit Airlines delivers double-digit revenue growth and modest margin expansion over the next two years (as I expect), investors could dramatically reprice the stock. A multiple of 15 times earnings would be quite reasonable for a company growing as quickly as Spirit, even factoring in the company's relatively high leverage. That gives Spirit Airlines stock potential upside to $100 or more over the next couple of years.

If you enjoyed this article, please follow me to receive updates on my latest research covering the airline, auto, retail, and real estate industries.

Disclosure: I am/we are long SAVE. I wrote this article myself, and it expresses my own opinions. I am not receiving compensation for it (other than from Seeking Alpha). I have no business relationship with any company whose stock is mentioned in this article.