Blue Apron (NYSE:APRN) has finally come close to kicking the bucket. After reporting disastrous fourth-quarter results that offer no hint of respite in 2020, shares of the original meal-kit company peeled back ~20%, despite initially rising after it announced it would be seeking "strategic alternatives" to save the company. Year to date, Blue Apron shares have lost more than half of their value, and its overall market cap now stands at just $47.4 million - less than the price of some luxury homes.

It's fairly clear from Blue Apron's fundamentals (which we'll review shortly in this article) that the situation is dire. Customers aren't as loyal as the company originally surmised and are defecting in droves to rivals, and despite massive cost cuts and improved efficiency in Blue Apron's supply chain, the loss of revenues is also driving holes in profit.

The only reason investors are sticking around is the hope of a buyout. Many observers have speculated (and even hoped for) a Blue Apron takeover for many quarters, as industry consolidation is likely in a space that relies so heavily on economies of scale. Alongside its fourth-quarter earnings release, Blue Apron officially announced that it was reviewing "strategic alternatives." A look at the verbiage of the announcement below:

But here's the critical question for Blue Apron investors: is there really anyone willing to buy a company that is, frankly, past its expiration date? Potential Blue Apron acquirers would be inheriting deep losses, a substantial amount of debt, and a shrinking customer base. Though its equity value stands below $50 million, Blue Apron's actual enterprise value stands at $129.1 million thanks to the ~$82 million of net debt on its balance sheet. With Blue Apron's most recent (horrendous) results, it's highly unlikely to convince any potential buyers to pay that price to take on this mess of a company.

Don't cling to this company in the hopes of a buyout - it's far more likely to simply slide into bankruptcy.

A glance at Blue Apron's fourth-quarter results gives us a good idea of just how dire the company's fundamentals are. Take a look at the earnings summary below: 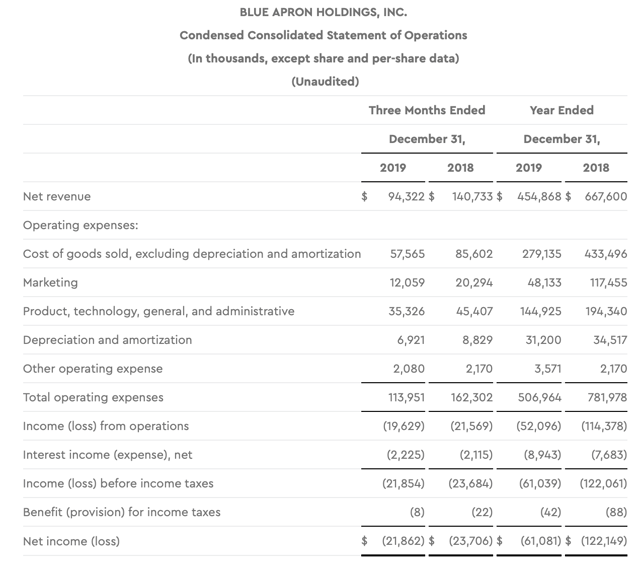 Quite unsurprisingly, revenues contracted yet again - shrinking -33% y/y this quarter to $94.3 million, and for the umpteenth time missing Wall Street's consensus of $97.7 million (-31% y/y). Across both the meal kit space as well as restaurant delivery companies like GrubHub (GRUB) and UberEats (UBER), the industry has been struggling with a lack of loyalty among customers.

Every player in the industry has been trying to distinguish itself in the sea of meal kit providers, and Blue Apron has chosen the "health-conscious" route. It sparked this effort by partnering with Weight Watchers (WTW) last year, and though this partnership initially brought in a jolt of sales, Blue Apron has been unable to revive customer growth. Here's what Linda Findley Kozlowski, Blue Apron's CEO, had to say on the Q4 earnings call regarding Blue Apron's ongoing customer positioning:

On our last earnings call, we discussed that in the near term we would prioritize the second pillar of our strategy, providing more choice including health-conscious choices and enabling more flexibility to accommodate a wider range of household needs and preferences. I’ll review the progress we made on this front in the fourth quarter [...]

What we believe continues to distinguish Blue Apron from other options is that while we’re committed to delivering health-conscious recipes ranging from carb conscious to plant forward, we never compromise on delicious. The high quality of our meals, diverse flavors and regular integration of unique produce and on-trend ingredients reflect our unwavering focus to delight our customers with every meal."

Unfortunately, this positioning has done little to attract a critical mass of customers, which we can see in Blue Apron's customer metrics. The absolute number of Blue Apron customers has continued to bleed every quarter, and in Q4 it fell to just 351k - a net loss of 35k customers since the prior quarter, and down -37% y/y: 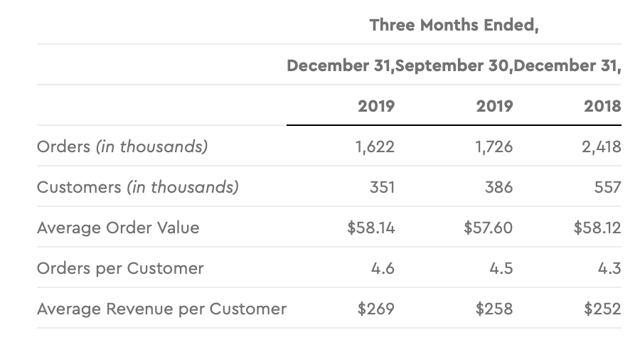 Consequently, the total number of orders in the quarter also fell -33% y/y to 1.62 million, parallel to the decline in revenues.

Obviously, for a business that relies so heavily on an efficient supply chain and economies of scale in large bulk purchases, this decline in customers has put a strain on Blue Apron's profits. GAAP gross margins have slid to 38.9% in Q4, 30bps worse than 39.2% in the year-ago quarter.

The good news is that Blue Apron has been able to skim down losses by cutting sales and marketing spend (which is also a primary driver behind the loss of customers). As seen in the chart below, Blue Apron was able to reduce its adj. EBITDA loss to -$8.3 million in the quarter, while halving free cash flow losses to -$12.2 million: 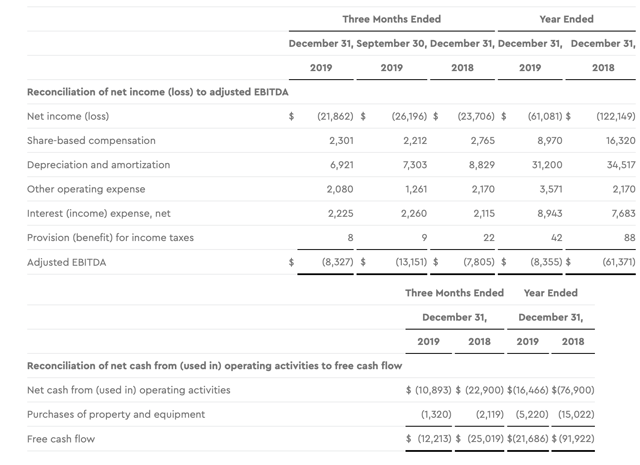 In the long run, however, without a pickup in revenues and an improvement in gross margins, advertising cuts alone can't bring Blue Apron to profitability.

Blue Apron is attempting a sale of the company from a position of weakness, and is extremely unlikely to get an offer for the company that would give current shareholders a meaningful return. The most likely scenario is that Blue Apron continues to bleed customers, sacrifice unit profitability, and run through its available reserves of cash - which, as of the end of the fourth quarter, stood at only $43.5 million.

Continue to avoid this stock as it crashes and burns.

Gary Alexander
24.28K Followers
Author of Daily Tech Download
Curated research on high-performing tech; winning trades closed monthly
With combined experience of covering technology companies on Wall Street and working in Silicon Valley, and serving as an outside adviser to several seed-round startups, Gary Alexander has exposure to many of the themes shaping the industry today. He has been a regular contributor on Seeking Alpha since 2017. He has been quoted in many web publications and his articles are syndicated to company pages in popular trading apps like Robinhood.