Avaya Holdings Corp. (NASDAQ:NYSE:AVYA) provides digital communications software and solutions to enterprise customers across voice and video collaboration along with automated customer support applications. This is a company that has had a volatile history, emerging from bankruptcy in 2017 and challenged to keep up with fast-changing innovations in the market. A new CEO and management team is now attempting a turnaround leading a transition towards cloud-based solutions and focusing on fundamentals. The company just released its latest quarterly report highlighted by still weak growth but some encouraging operational trends suggesting an improved outlook.

Avaya Holdings reported its fiscal 2020 Q1 earnings on February 10th with a GAAP EPS loss of (-$0.54) which was also $0.46 below expectations. Revenue in the quarter at $717 million was down by 4.1% year over year, but favorably $5.8 million ahead of estimates. The company generated a positive operating income, but the bottom line remains pressured by a large interest expense given its high current debt level. During the quarter there was also a large advisory fee related to its partnership with RingCentral (NASDAQ:RNG) which we discuss below.

With growth objectively weak, the story here is that AVAYA is in an ongoing transition period to its business structure as the company moves more towards cloud-based solutions. The organic trends in sales have been pressured by higher global competition from emerging alternatives across key product segments. Nevertheless, the company thinks the strategic change is a bet that current investments pressuring near-term profitability can lead to a stronger more sustainable long-term outlook. 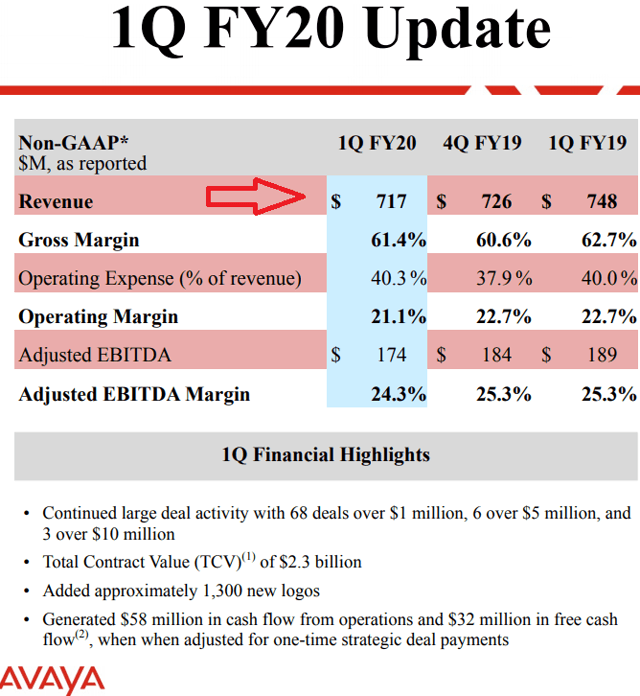 The cloud-based products include 'Unified Communications' software which encompasses various collaboration solutions for workplaces across video, voice with customized development. 'Contact Center' is an industry-leading digital solution that can integrate with client applications to provide customer support and help via voice, chat, email, and performance management. Consumers may be familiar with website customer support "chatbots" which highlight one of Avaya's featured products.

Positive highlights for the quarter were "wins" among large deal activity with new business representing millions of dollars in new contracts while cash flow from operations and $32 million in free cash flow also support the underlying business.

Product revenue from software now represents 65% of total business, up from 60% in 2019 and 42% back in 2015. The goal here is to have a higher proportion of recurring revenue which is seen as higher quality and less volatile. Management highlighted these trends during the conference call taking an overall positive outlook for the year ahead:

We got off to a strong start for the fiscal year. Our Q1 non-GAAP revenue was $717 million, above the midpoint of our guidance range, a positive reflection on our sales and operational execution. The composition of our revenue continues to reflect our deliberate and successful shift to a software and cloud-based business model. Notably, software and services, as a percent of revenue, increased to 86%, up from 83% the prior quarter and prior year. Also significant, our Cloud, Alliance Partner and Subscription revenue or CAPS grew to 18% from 15% in the prior year. 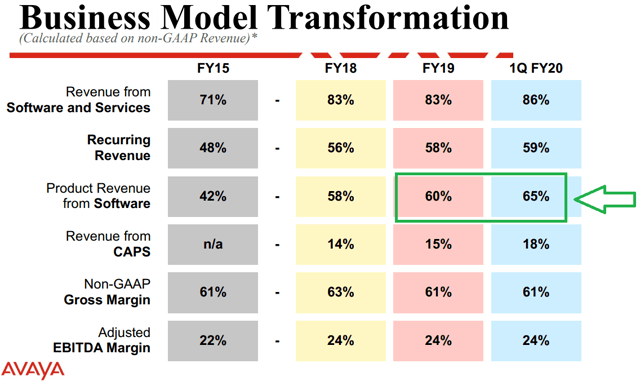 (Source: Company IR/annotation by the author)

In October 2019, AVAYA announced a partnership with RingCentral which is a leader in enterprise cloud communications, collaboration, and contact center solutions. Both companies are with similar product solutions targeted towards different end-users and market segments. Avaya's Unified Collaboration and Contract Center software technology can be described as more extensive or customizable. 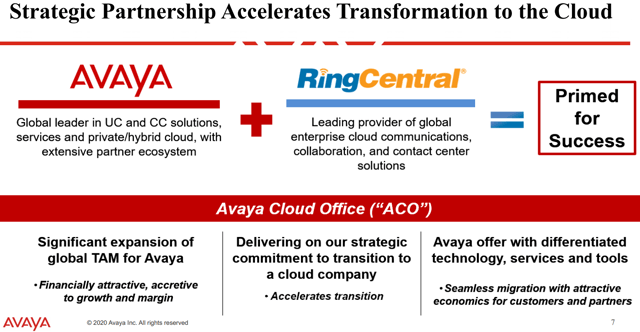 In the deal, RingCentral paid Avaya a $375 million cash advance for future payments and licensing rights along with $125 million towards the joint product investment announced as the new Avaya Cloud Office by RingCentral "AOC" offering. AVAYA announced a $500 million share repurchasing authorization and debt repayment of $250 million as part of its capital allocation priority with the cash infusion.

RingCentral brings to the table faster growth while Avaya can leverage its legacy services ecosystem. The idea here is that both companies provide unique aspects of their products to create a new differentiated Unified-Collaboration-as-a-Service "UCaaS" product. The main benefit for Avaya is that it expands its total addressable market by entering new segments financially accretive to margins.

During the latest earnings conference call, management provided an update noting the ongoing rollout of AOC which is expected to be a demand driver going forward. Overall, the partnership is still a relatively small part of the AVAYA business but a positive development.

Later this month, Avaya Endpoints will be available for auto provisioning, not only with ACO but as part of RingCentral's own RCO offering, providing another demand engine for our devices. Our initial launch will focus on the U.S. and will quickly expand to three additional countries in the next release cycle. Additionally, we've identified and prioritized exclusive Avaya features to incorporate into ACO that not only differentiates ACO from other UCaaS solutions, but also maintains the customer and user experience that the highly loyal Avaya customer base has come to expect.

Management is guiding for non-GAAP revenue between $2.84 billion and $2.92 billion for the full-year fiscal 2020 which at the mid-point is effectively flat compared to 2019's result of $2.908 billion in non-GAAP revenue. Adjusted EBITDA between $650 million and $700 million compares to $706 million in fiscal 2019. The results suggest that even with the RingCentral partnership, new revenue opportunities are simply balancing organic declines in other parts of the business. Again, the weak headline numbers are balanced by more positive long-term opportunities.

Keep in mind there is a large spread between consensus non-GAAP EPS estimates for 2020 at $3.37 compared to an estimated GAAP EPS loss of $0.56. Avaya for its part does not report a non-GAAP EPS result but the market nevertheless excludes the impact of various charges like the amortization of intangible assets and share-based compensation.

We think the adjusted EBITDA guidance that management chooses to focus on is a reasonable measure of the underlying trends in operational and financial performance which in this case is trending in the right direction. Investors in Avaya simply need to focus beyond the near-term lack of profitability and see the potential that the company can scale its software and service solutions.

The market has been particularly bullish on AVYA since the October announcement of the RingCentral partnership when the stock traded as low as $9.72 and is now up 46% since then. In many ways, the deal represented a lifeline for the company that was facing intense competition in Unified Collaboration which is otherwise a high-growth market segment. We highlight a company like Zoom Video Communications Inc. (NASDAQ:ZM) with revenue growth of 85% in the last quarter which puts Avaya's modest ambitions in perspective.

That being said, the reorganized Avaya in its current state is now something of a value pick in tech which in our view is a rarity in the market. Management reported free cash flow of $128 million in 2019 represents a price to free cash flow multiple of 10.6x for the trailing twelve months. Considering the adjusted EBITDA guidance for the year ahead at $675 million, this level implies a forward EV to EBITDA multiple of 5.3x.

The bullish case here is that AYAVA can execute its strategic transition towards the cloud to support margins and a track towards profitability going forward. The stock is well-positioned to move higher should growth and earnings exceed expectations from currently depressed levels.

To be clear, there are still fundamental weaknesses as the company is not currently profitable and has a net debt position of ~$2.12 billion representing a net debt to EBITDA leverage ratio of 3.1x. Flat revenue growth for the year ahead also leaves a lot to be desired.

To the downside, beyond the risk of a global cyclical slowdown or deterioration in IT business spending, weaker than expected or disappointing results from here could renew the bearish sentiment in the stock price.

We balance an overall more cautious view on the forward outlook for AVAYA against some favorable valuation metrics to rate shares as a hold. While the weak growth leaves a lot to be desired, positive free cash flow and an EV to EBITDA multiple of just 5.3x gives the company some flexibility and time to prove its turnaround. Over the next year, we like to see trends in organic growth accelerate which will likely be required for the stock to sustain a move higher.