Checkpoint Therapeutics (NASDAQ:CKPT) is a majority-controlled subsidiary of Fortress Biotech (FBIO). The Company is focused on the acquisition, development, and commercialization of novel treatments for patients with solid tumors. Its lead candidates are CK-101, which is in Phase 1/2 clinical trial for the treatment of patients with EGFR+ non-small cell lung cancer (or NSCLC) and CK-301, an anti-PD-L1 antibody which is in an ongoing Phase 1 clinical trial in checkpoint therapy-naïve patients with selected recurrent or metastatic tumors. 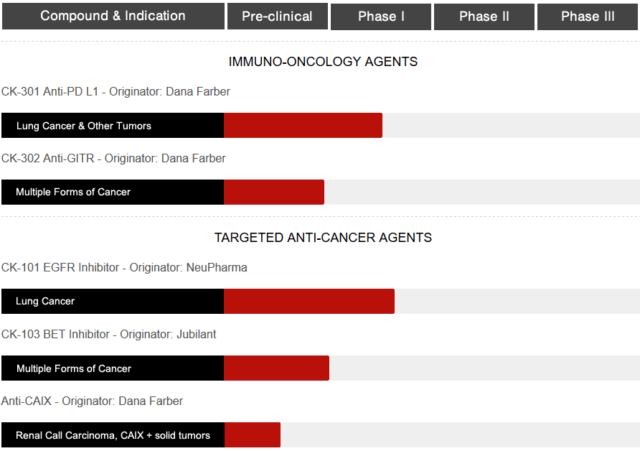 Identification of EGFR as a target has completely changed the treatment of metastatic NSCLC from chemotherapy to personalized, targeted therapy.

Since their introduction, first-generation EGFR inhibitors - such as gefitinib or erlotinib - significantly improved overall response rate (ORR) and progression-free survival (PFS) in NSCLC patients with EGFR mutations. However, the T790M mutation decreases the affinity of first-generation inhibitors to EGFR kinase domain, rendering the drugs ineffective.

Second-generation EGFR inhibitors (afatinib and dacomitinib) have not provided meaningful benefits in NSCLC patients due to toxicity from also inhibiting wild-type EGFR.

Osimertinib is one of the most advanced third-generation EGFR inhibitors. In phase 3 FLAURA clinical trial osimertinib demonstrated to have longer PFS over both erlotinib and gefitinib in the first-line setting.

In short, this is the situation today:

Osimertinib is the only approved third-generation EGFR inhibitor under the trade name Tagrisso, and it is leading the oncology business at AstraZeneca (AZN) with $3.5B in annualized sales, projected to reach over $6B in 2024.

Checkpoint Therapeutics is planning a phase 3 with a design similar to that used by Tagrisso: approximately 300 treatment-naïve EGFR-mutant NSCLC patients will be enrolled and randomized 2:1 to receive CK-101 or gefitinib. The primary endpoint of the study will be progression-free survival, and the patients will be stratified according to their EGFR mutation (Ex19del vs. L858R) and if they are Asian or Non-Asian.

Updated interim safety and efficacy data of the ongoing phase 1/2 are expected in 2020, but Checkpoint's optimism comes from what was announced at World Lung in 2018.

As of June 25, 2018, 37 patients were treated in dose escalation and expansion and evaluable for safety. No dose-limiting toxicities or treatment-related SAEs were reported. The most common events were nausea (16%), diarrhea (14%), lacrimation increased (14%), and vomiting (11%), all grade 1/2 except one grade 3 diarrhea.

In dose-expansion, 19 patients were treated at a dose of 400 mg bid and evaluable for response. Eight patients were treatment-naïve, six had brain metastases, sixteen patients remained on treatment. Disease control rate was 100% (19/19), with sixteen patients (84%) experiencing target lesion reduction versus baseline and eight patients achieving a partial response (7 confirmed). In treatment-naïve patients, six out of eight (75%) achieved a partial response. In patients with brain metastases, three out of six (50%) achieved a partial response. Higher drug exposures were associated with a higher response rate with a confirmed ORR of 55% (6/11) when achieving Cmax >400 ng/mL. The median duration of response and progression-free survival were not reached as of the data cutoff.

Cosibelimab, or CK-301, is a fully-human monoclonal antibody of IgG1 subtype that binds to Programmed Death Ligand-1 (PD-L1 which removes the suppressive effects of PD-L1 to restore the cytotoxic T cell response.

Checkpoint licensed the exclusive worldwide rights from Dana-Farber in March 2015 and (in the same year) entered into a global collaboration agreement with TG Therapeutics (TGTX), to develop and commercialize the antibody in the field of hematological malignancies.

The Company retained the right to develop and commercialize its anti-PD-L1 antibodies in solid tumors and commenced a Phase 1 multi-center clinical study for CK-301 in October 2017. The trial is evaluating the safety and tolerability of ascending doses of Cosibelimab in checkpoint therapy-naïve patients with selected recurrent or metastatic cancers.

In January 2019, the Company announced the expansion of the ongoing study to enroll patients in three cohorts intended to support requests for accelerated approval and BLA submissions to the FDA:

The primary endpoint for each cohort is ORR. The trial is also enrolling groups of patients with NSCLC and cutaneous squamous cell carcinoma (cSCC). About the latter indication, last January Checkpoint Therapeutics announced that the Food and Drug Administration confirmed its plan to submit cosibelimab for full approval on the basis of data from the ongoing open-label, multi-center, Phase 1 clinical trial. The Company expects to complete enrollment by year-end and, assuming everything looks good, submitting a BLA for cosibelimab in 2021. 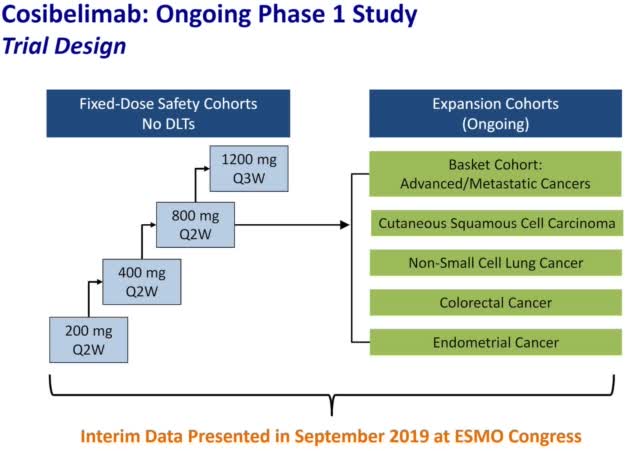 At the August 5 cutoff date, ORR for cSCC cohort was 50% in the first 14 evaluable patients. One patient achieved a complete response (CR), and six patients achieved partial responses (PR). All seven responses were confirmed and ongoing at the time of the analysis. 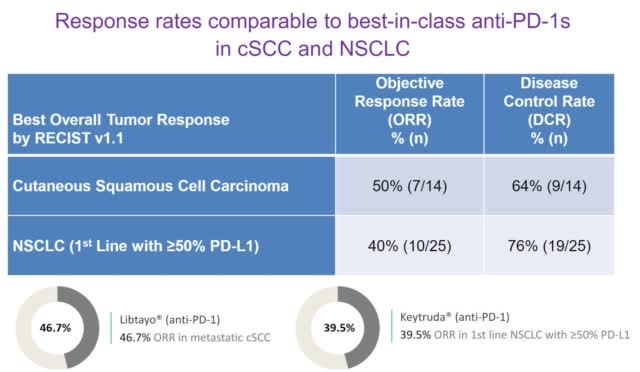 Metastatic cSCCis the initially planned indication for cosibelimab. Regeneron (REGN) and Sanofi's anti-PD1 Libtayo (cemiplimab) is the only approved treatment for advanced cSCC. As can be seen from the image above, cosibelimab can hold a candle to Libtayo. However, it cannot be ignored that Checkpoint's data should be taken with caution because they are based on a limited number of evaluable patients.

The Company licensed the exclusive worldwide rights to anti-GITR antibodies from Dana-Farber in 2015 and then entered into a global collaboration agreement with TG Therapeutics (TGTX) to develop and commercialize anti-GITR antibodies in the field of hematological malignancies.

Checkpoint Therapeutics retains the right to develop and commercialize CK-302 in solid tumors, and the antibody is currently in the preclinical phase. To date, it is not clear what TG Therapeutics' intentions are, however, seems everything but a priority.

Despite the preclinical anti-tumor activity of agonist anti-GITR antibodies, the current results cannot be regarded as a success.

Last year AstraZeneca (AZN) discontinued MEDI1873. Five Prime Therapeutics (FPRX) terminated a license agreement with InhibRx, which included a license to an anti-GITR antibody. Merck (MRK) has discontinued the development of MK-1248 for the treatment of solid tumors, due to program prioritization and also MK-4166 (which has the same complementarity-determining regions but different Fcγ R binding profile) seems to have no future. A phase 1/2a trial reported in JAMA Oncology showed no evidence of activity Bristol Myers Squibb's BMS-986156 alone or in combination with nivolumab in patients with previously treated advanced solid tumors.

CK-103 is a small molecule inhibitor of BET bromodomains. BET proteins are considered promising therapeutic targets in cancer because they promote aberrant expression of the MYC oncogene in various hematologic malignancies. MYC overexpression is also documented in several solid tumors.

Checkpoint and TG don't seem to be in any rush, for both the program is still in the preclinical phase.

Okay, and that's interesting how?

Checkpoint Therapeutics' approach is summarized perfectly in the following picture: 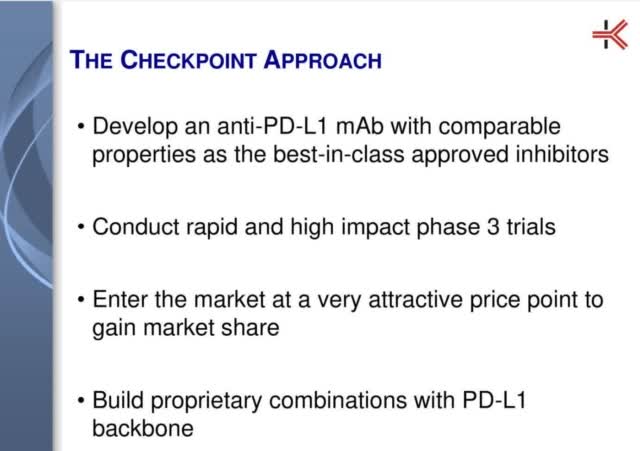 What you're seeing is a slide from a Company presentation dating back to 2018. Today we can say that Checkpoint is developing an anti-PDL1 that seems to have similar characteristics relative to the competition. It is running a pivotal trial, and assuming everything looks good, it will submit a BLA for cosibelimab next year. Rapid and high impact.

But as far as building a combo with cosibelimab, there is still work to do. Checkpoint Therapeutics hasn't tried yet, and broadening the horizon, to date, the data supporting the use of immune checkpoint inhibitors either after or in combination with EGFR inhibitors have been extremely disappointing. Cosibelimab and CK-101, taken individually, are promising, and that's all you can say now, and that's no small fee.

The issue of attractive prices is rather interesting. Last year Richard Pazdur, the director of FDA's Oncology Center of Excellence, urged Chinese companies to bring their anti-PD1/PDL1 to the U.S. market to cut the prices charged by major western pharmaceutical companies. I would mention, for example, that Shanghai Junshi Biosciences priced its anti-PD1 toripalimab at an 83% discount to the China price of pembrolizumab, a Merck anti-PD1 that is priced in China at a 50% discount to the US price.

The possibility of fast approval justifies the decision to focus initially on cSCC, and at that point, the low cost of the therapy could stimulate off-label prescribing.

Another critical point is that CK-101 data update is expected in early 2020 (so, it could happen at any minute), and this is a key upcoming catalyst for the Company.

Finally, it should not be forgotten that should be enough currency through potential cosibelimab BLA submission in 2021.

Obviously, there are also some downsides. First of all, although both EGFR and PDL1 are well-validated molecular targets, competition is intense. To date, the number of checkpoint inhibitors being trialed has grown over three-fold since 2015, and the vast majority of trials involve PD1 and PD-L1 targets.

As for CK-101, it should be noted that other third-generation drugs have disappointed expectations, and Checkpoint's drug could go down the same road.

Checkpoint Therapeutics is a micro-cap ($85M), with all that this entails: it is riskier, according to several measures. The stock could experience huge volatility swings, and many investors can't stomach this kind of uncertainty.

Because if it is true that the increasing use of anti-PD1/PD-L1 has prompted concerns over the burgeoning costs associated with their use, the answer to this problem could include cosibelimab.

Despite the importance of avoiding prolonged sun exposure, the incidence of cSCC continues to rise worldwide. Nevertheless, the exact incidence and prevalence of these cancers are not as well understood. According to Regeneron cSCC is the second most common form of skin cancer and is responsible for an estimated 7,000 deaths each year in the U.S., with the number of newly diagnosed cases expected to rise annually. Libtayo benefits from a first-mover advantage in cSCC, but if Checkpoint could be able to gain only a small market share and to execute its strategy, things will change. For the Company and, maybe, for the system.

falsoguaritore
647 Followers
I have been a businessman for over twenty years, a long-term blogger, an investor and a consultant with a focus in the field of biotechnology. My main interest is related to small and medium-sized companies with high growth potential, and a particularly innovative structure.

Disclosure: I am/we are long CKPT. I wrote this article myself, and it expresses my own opinions. I am not receiving compensation for it (other than from Seeking Alpha). I have no business relationship with any company whose stock is mentioned in this article.